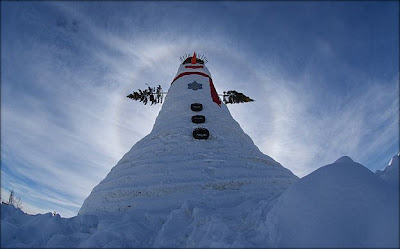 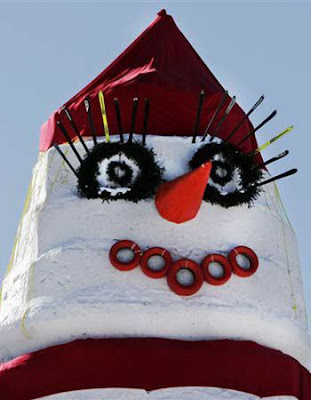 Have you guys seen this? It just came across my email and I thought it was too good not to share. The world’s tallest snowman was made in Bethel Maine. The “snowwoman” that towers over this Maine village features eyelashes made from old skis and her bright red lips are made from painted car tires. She wears a giant red hat and a 100-foot-long scarf, and her blond tresses are made from rope. She gets a little bling from a snowflake pendant that’s 6 feet long.With the temperature in a single digit, several hundred people, including bus loads of school children still turned out for the dedication of the 122 foot tall mountain of snow. It took more than a month, dozens of volunteers and tons of snow to create.

To get an idea of scale, Olympia is about 30 feet shorter than the Statue of Liberty (without the base). Her arms consist of 27-foot-tall evergreens. Her “carrot” nose, painted by school children, is 8 feet long and her eyes are made from giant wreaths.

This ski town of about 2,400 residents already holds the record for tallest snowman, dedicated in 1999. Since then, they have been waiting for someone else to break the record. When no one rose to the challenge, the folks here decided they’d have to break their own record. What does Bethel , Maine , do when it gets tough? They build a snowman!” ” Olympia ,” named for Maine ‘s senior senator, Olympia Snowe, stands nearly 10 feet taller than “Angus, King of the Mountain,” who was dedicated by the town in 1999. That snowman, named for the then governor, Angus King, was created by the same folks responsible for Olympia. 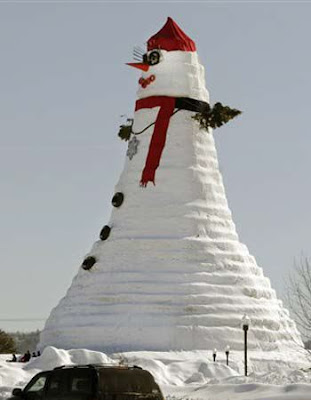 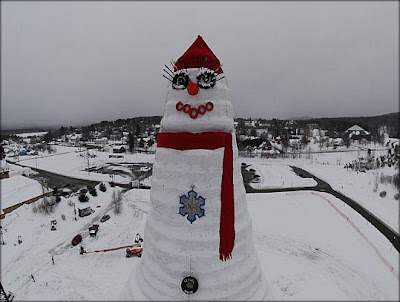 And here is King Angus! 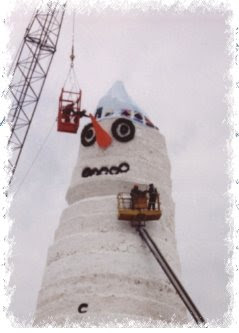 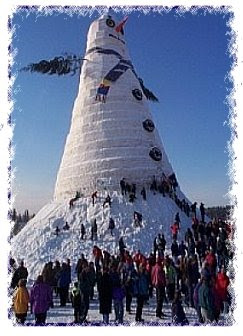 Wow … that’s a BIG snowman!!! Thanks for sharing ;–)
Hugs and blessings,

I really enjoyed this. thanks for sharing it.

It’s huge! Amazing. Looks like it was built over a lighthouse. Can’t believe the lips are made from tires, but they sure are!