The stairway sounds like a simple area to do, right? WRONG!! To start with was that broken stair which wasn’t in the inspection report so we assume happened when they were moving out. Speaking of that, it evidently became too difficult for them to lift items over the banister so they took out the upper banister and when they put it back just used 3 long screws through the nice wood on the top into old lathe and plaster – yeah real secure! They also had those 2 different UGLY wall boards covering that wall with molding that made no sense in the lines or angles or at least they didn’t until we removed the UGLY wall board to find the bad patch work to the lathe and plaster. So we removed the UGLY wall boards, patched the bad area and then texture painted over it. It was still weak, so in an effort to also create a continuity we decided to use moldings to match it all up. 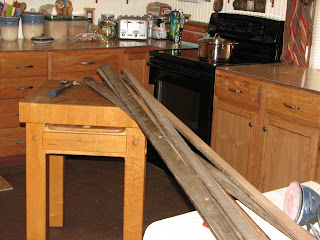 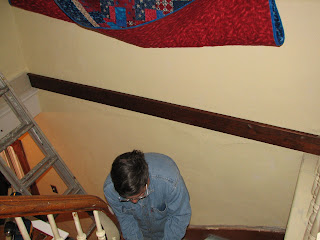 With the cost of wood products being what they are, we decided to see what was in the barn. They had left behind “TONS” of old wood, but we weren’t sure if any of it was usable. Fortunately much of it was which gives a better continuity to the look using the turn of the century wood and saved us a ton of money too. Since it is all going to be painted anyway, the stain colors don’t matter. 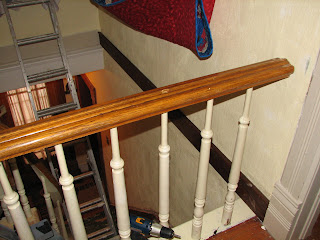 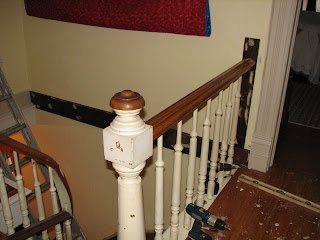 We created an anchor board to secure the top banister to the wall and make it secure once again. 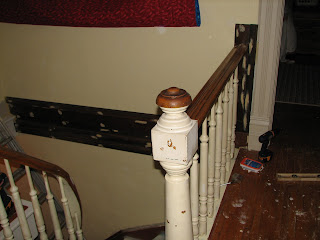 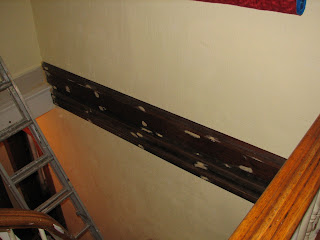 We kept ‘building’ and arranging until it matched up with the old molding and covered the patch area securely. 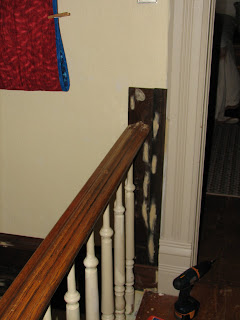 So the next post on this stairway will be all completed and painted! At least we’ll always know this exists on the second stair down. 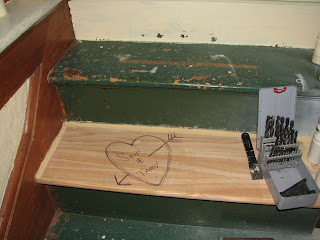 Tamy, I think you have cured me of ever wanting to buy an old house, or of trusting a house inspection report!

You guys sure are doing a lovely job renovating, though.

looks like things are coming together nicely! can’t wait to see them finished. love the little personal addition to the step!