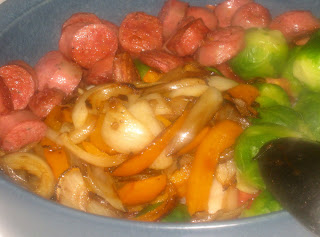 My husband said, this was interesting which meant to me, he did not like it, but then I watched him take three servings. He liked it. The truth is it is an interesting recipe because it is not a combination I have ever used and you, very likely, have not used, either. It worked though, it worked very well, blending flavors.

This has some of my favorite food, sausage, pasta, Brussels sprouts, and tomatoes. For me, it had to be good and it was. If you make this, you can substitute in every area. You could use chopped meat or meat balls instead of the sausage. You could use another vegetable in place of the sprouts, (green beans, broccoli, cauliflower or even spinach. I would leave the pasta and tomatoes in place but choose any pasta you want.

Microwave or boil Brussels sprouts.
Spray a large skillet with cooking oil and fry sausages in it until they are lightly browned.

Remove sausage. Do not clean skillet. 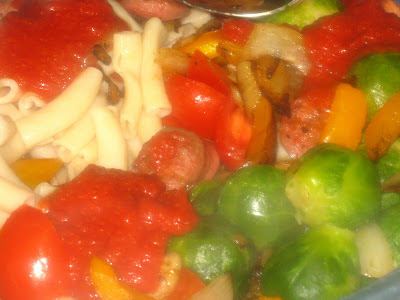 Mix all ingredients gently together. I put these in a casserole and heated them in the oven for twenty minutes on 300 degrees. 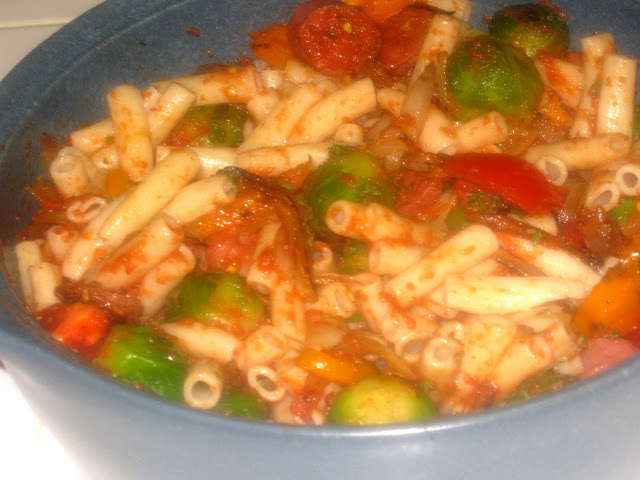 Great link Chaya – although I think I see Dave heading out to get a whole case of scotch after that! 😉

I found this today. Actually, it looks interesting.

Dave, put down those brussels sprouts and join us over on the message board – or let me know if for some reason you didn’t get the invitation email.

Okay this is getting good! Dave as for cruel, you are so wrong. I too hated them as a kid, but that was because I hadn’t had them prepared “good”. So I dare you not to like one of our recipes LOL. I do want to hear what the ghosts said to you though. Martha I like the roundup idea!

Okay, Chaya, Chocolate Chip Cookies?? Let’s take this to a new discussion in the new group!

Dave is a good sport but he is going down.

We should open this to all readers. We accept all brussel sprout recipes with the proviso that we will be fair to Dave. He does not have to eat them all.

That brings up an idea. Key word, chocolate chip cookies. Someone ask me about it in email.

However you want to work it is fine with me Dave – but it’s 5 recipes since Min also left a comment on her post with yet another Brussel’s Sprouts recipe for you. Maybe we should do a Brussel’s sprout recipe round up, LOL! I’d be willing to post it on Saturday. What do you think?

I can not believe I about to say this, but I want to suspend this contest (and rework it) for 48 hours… Because, I want to enter my own Brussels sprouts recipe. I will still hate them. BUT, I was visited by three ghosts during the night, and I have a vision of a recipe that will “win” me the glory of winning the title of “Master of the Brussels Sprout”.

Dare I suggest a different little contest prize… Say we all chip in $5 to Amazon.com… winner take all. We would need an impartial judge, and asking someone to make 4 brussels sprouts recipes is cruel and VERY unusual, the winning recipe would be the recipe the judge would most like to make.

What do you all think???

Wait LOL I want gifts too! just kidding, but Chaya does have a point Dave – eat those sprouts without washing them down with scotch!

How about beer? Can there be beer? please Chaya?! 😉

This is very bad. You guys were having fun without me. I turn my back for just one minute and there you are making deals.

Dave, if you are requesting gifts, I don’t want scotch. Be a man. Eat those sprouts without it. No even a beer.

I think Martha should be in charge of gifts.

Tamy can run the place and Dave and I will receive gifts, not scotch.

Whoo-hoo! We are having some fun here now! It’s Krazy! I like it! 🙂

I was thinking more along the line of some kind of specialty sauce, marinade or odd item I come across that I’ve never heard of. How’s that Dave?

Challenge accepted here! Maybe that would be a good thing for a future theme – you know the best way to make liver, brussels sprouts and ????

And tamy and Chaya… If I am going to be so drunk that I let one sprout pass my lips, I may as well try your recipes as well…

Interested in the same challenge??? There are lots of foodie gifts I need (and even more bottles of scotch)…

Actually. how about this… i will make all three recipes… The one I dislike the least (the one I like the most), I will send off a foodie gift to.

I will still come out ahead, as I seriously doubt I will like any of them. But an honest effort is promised

Does a bottle of scotch count as a foodie gift, cause that is about the only way I can imagine liking sprouts.

get that gift ready (I am hoping for a copy of Bread baker’s Apprentice, but i will settle for a great bottle of scotch)

So, in the VERY unlikely possibility that i will like them, I will have a foodie gift for you (don’t count on it)

I love your attitude too Chaya 🙂

I just hope Dave knows this is a challenge. If he tries my brussels sprout recipe and still hates them I will send him a little foodie gift item of my choice.

Are you listening Dave?

Maybe we can get Dave to send us all a gift if he decides he loves them, LOL!

You and Tamy are a riot. Today’s theme should have been brussel sprouts which Dave loves, whether he knows it or not because I said so.

PS – Check out the link I added here today Dave 🙂

Chaya this looks so colorful and inviting for a cold dreary day – thanks!

Aw Dave you have to try these recipes! LOL If you can eat quiche you can learn to lovvvvvvvvvvvve Brussels sprouts.

Yum! Such a bright and colorful dish too! I love pretty food 🙂

I love every ingredient except the Brussels sprouts (in many ways, I am still 6 years old). But, since you said i could sub,,, I will try this with …

actually, this is saying corn to me

Love every other ingredient, so it is a keeper!