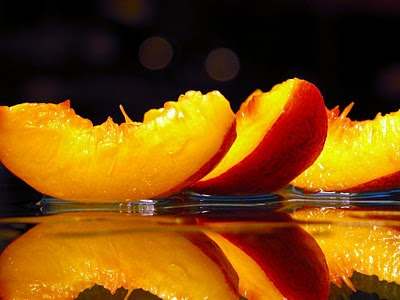 Peaches are believed to be native to China. They are cultivated throughout warm temperate and subtropical regions of the world. In the peach fruit, the stone is covered with a fleshy substance that is juicy, melting, and of fine flavor when matured and mellowed.

The popular division of fruit varieties into clingstones and freestones-referring to the relative tendency of the flesh to cling to the stone-is by no means accurate. These two classes merge in different varieties, and even the same variety may be freestone and clingstone in different seasons. The nearly 300 varieties of peaches grown in America have been classified into five races, each with outstanding characteristics, ripening season, and uses.The nectarine is a variety of peach.

The principal peach-growing state is California. World production totaled about 5.5 million metric tons annually; the United States and Italy were the leading producers.

How to Store:
To ripen peaches, store in a brown bag at room temperature. Ripe peaches can be stored in the crisper bin of your refrigerator for up to five or sixdays.

August is National Peach Month. Here’s a round-up of facts about one of the world’s favorite fruits.

History Of The Peach