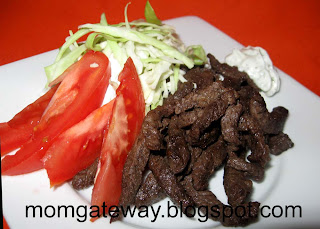 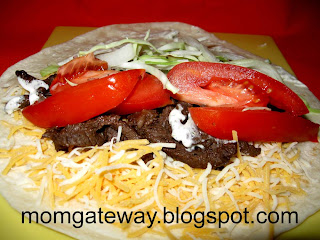 This is shawarma. It’s a Lebanese-style sandwich, an Arabic version of the Turkish döner kebap. Although very similar to the Greek gyros in the way the meat is cooked, shawarma sauce, ingredients and garnishes are different from gyros. 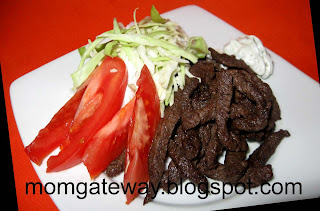 Today, I’m guest posting for OuR KrAzY kitChEn. My first guest post ever will be short and sweet. I am not an expert in Lebanese cuisine but I ‘ve tasted a lot of shawarma after trying out so many cookbook and online recipes for it so I can say with confidence that the recipe I’m sharing is one of the best so far.

But before I do, let me introduce the recipe by describing my first encounter with authentic Lebanese shawarma. I was at the lobby of the Hyatt Regency Hotel when I espied a crowd of people gathering around a booth. I went closer and from where I was standing, I could see what looked like a tower of meat being roasted. Luscious, tender, thinly sliced beef and lamb seasoned with lemon juice, cumin, allspice, mace and other spices was slowly being grilled in an upright rotating roaster. The meats were stacked neatly in the vertical spit with alternating layers of marinated beef and lamb. Perched like a crown of jewels, a huge tomato and an onion topped the gorgeous stack of golden brown, lightly-charred, juicy meats. The place was perfumed with an irresistible combination of spices, lemon juice and the essence of chargrilled beef. The juices of the onion and tomato dripped down and basted the meat tower The man in charge shaved the meat for each order and placed it on pita bread along with freshly shredded lettuce, beet-colored pickled turnip, parsley, onions and sliced tomatoes. A generous spoonful of creamy, garlic tahini sauce (made of finely ground sesame seeds) was added and the pita bread was folded into a sandwich wrap and handed to me. My first taste was unforgettable. …. this Beef-Lamb Shawarma was absolutely DELICIOUS, moist and very flavorful….and I was nowhere near Lebanon but in the midst of scientific conference in Montreal, Canada!

Since then I’ve been on a quest to recreate that perfect shawarma. None of the recipes I’ve tried before even came close. The recipe I recently found and adapted from The Lebanese Kitchen by Monique Zaarour is not yet perfect but it’s the best so far. Monique tailors it for the Western kitchen by pre-cutting the meat and using a regular oven as it’s almost impossible to have a counter top shawarma oven in North America. 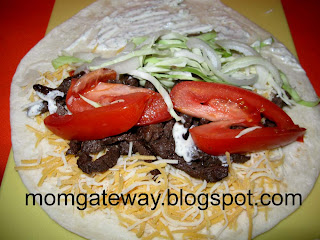 I am glad you shared this. I learned from it and I have a real desire to run out and get shwarma or at least some meat to make it with. Thanks.

I agree – love a new recipe that teaches me something too! 🙂 Thanks for being a guest hoster here at OUR KrAzY kitchen – great job!

Sounds delicious! Thanks for guest hosting today here at our Krazy Kitchen 🙂

I LOVE these posts where I can find a great recipe AND learn something! We used to go to a fabulous restaurant in NY where the meat was sliced off of a vertical spit- delicious!
xoxo Pattie