The key word here is SURPRISE! We’re not telling Dave until tomorrow! So remember to keep this hush hush. 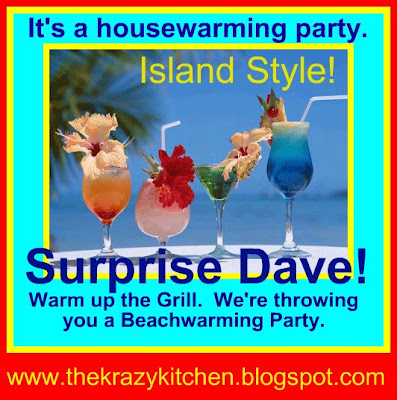 We’re throwing a house/beach warming party over at OUR KrAzY kitchen for one of our awesome contributors, Dave from My Year on the Grill who had the horrible misfortune (big sarcastic laugh here) of being forced to move from snowy and cold Kansas to the Virgin Islands. So I thought I’d start with this tutorial about the Caribbean culture of foods.
Bahama Breeze has a great section, All about Caribbean Food that explains about the local cuisine and I have listed below for you as well as many wonderful menus. Go check out those menus for some new recipe ideas They’re awesome.

Caribbean food includes ALL of your favorites… seafood, chicken and steak… prepared with the flavorful and colorful ingredients of the islands. Some popular dishes are coconut shrimp, jerk chicken pasta, chicken kabobs, ribs with guava BBQ sauce and Key Lime Pie.

Food plays a central role in family life and traditions in the islands. Cooks spend days preparing menu offerings for holidays, festivals, and special family gatherings. The cuisine of the Caribbean is like a cultural patchwork quilt. Each “patch” or dish represents the plentiful bounty of the islands’ lush tropical vegetation, combined with the one or more diverse groups of people that have lived there, including the original Carib and Arawak Indians, followed by the Spanish, British, French, and Dutch settlers, as well as Africans, who have had a profound influence on the food and cultural traditions of the islands. Later followed Indian and Chinese settlers, and travelers from the United States.

Here are some terms you might come across when perusing our menu. Each part makes up the whole of the delicious Caribbean culinary adventure:

Ackee This reddish-yellow fruit of an evergreen tree was introduced into Jamaica from West Africa. Ackee, aptly named “vegetable brains”, lies inside the innermost chamber of the exotic red fruit. The yellow flesh tastes like scrambled eggs, and is popular served with saltfish, hot peppers and onions.

Asopao Means “soupy” in Spanish. Very popular in Puerto Rico, asopao is a soupy stew which contains chicken, meat or seafood and rice, plus ingredients such as tomato, onion, bell pepper, ham, peas, olives, and capers.

Calabaza A sweet, pumpkin-like squash, somewhat like butternut squash. It is often used in the Caribbean as the base for pumpkin soups and in vegetable dishes.

Carambola Known as the “star fruit” because of it’s shape when cut cross-ways. It is crisp, juicy and golden in color, and is used in desserts or salads.

Ceviche Seafood “cooked” by the acids of citrus juices, seasoned with onions and fresh herbs.

Chayote A member of the squash and melon families, it is also known as Cho-cho or Christophene. It is a green pear-shaped fruit used as a vegetable in salads or cooked in a variety of ways.

Chutney A blend of cooked tropical fruits and vegetables flavored with peppers and spices. Mango chutney is a traditional accompaniment to curries.

Coconut A fresh coconut has liquid inside, so shake it before you buy it! To open a coconut, puncture two of its “eyes” – the darker dots on one end – with a small sharp knife or an ice pick. Drain all the liquid from the coconut, then tap the whole surface of the shell lightly with a hammer. Now give the shell a sharp blow with the hammer. This will open the coconut, and the meat will now come away from the shell.

Curry Curries are highly seasoned gravy-based dishes originating from India. They are prevalent on islands such as Jamaica, Trinidad, and Tobago, where indentured servants from India settled in the mid-19th century. Many Caribbean cooks use prepared spice mixtures that include coriander, cumin, turmeric, black and cayenne peppers, and fenugreek, among others. Caribbean cooks also commonly add allspice to their curries.

Escabeche Also called Escovitch by the Jamaicans. Seafood that has been pan fried or poached, then marinated in citrus (or vinegar) and herbs.

Guava A bright orange to red tropical fruit about the size of a small lemon. Used in compotes, pastes and jellies. Guava pastes from the Hispanic islands are intensely flavored and are delicious served with cream cheese and spread on cassava or other crisp breads or crackers.

Jerk The words “Jerk” and “jerky” originally referred to the process of rubbing spices and acidic hot peppers onto strips of meat in order to tenderize and preserve them. In Jamaica, Trindidad, Barbados and Tobago, an entire culinary art grew up around “jerk”. There are many jerk seasoning combination in the Islands, most of which call for scallions, thyme, allspice, hot peppers, onions and garlic. Some jerks use citrus juice or vinegar to add tartness, or molasses to add sweetness. Typically used on chicken or pork, jerk also complements fish dishes.

Jicama A root vegetable that looks like a large brown turnip with white sweet crisp flesh.

Mango A tropical fruit with thick skin varying in color from green to bright red. Its flesh is yellow, firm and sweet, and can be eaten raw or as part of many marinades, sauces, ice creams and sorbets. Green mangoes are a main constituent of the best chutneys and are used in down-island stews as a vegetable.

Mauby (or Mawby) Mauby is the bark of a tropical tree. It is boiled with spices to make a Caribbean drink of the same name, reputed to lower blood cholesterol.

Mojito Cuban cocktail made with rum, lime and soda water.

Okra This green pod-like fruit was introduced to the Caribbean region by African slaves, and is cooked as a vegetable on the islands. Often used as a thickening agent in soups and stews.

Paella Of Spanish origin, paella generally consists of rice topped with chicken, pork, chorizo sausage, shrimp, clams, mussels, and peas in a chicken saffron stock. However, paellas do not have a set list of ingredients, and are as varied as the chefs who create them.

Papaya Also known as PawPaw, this is a large melon with sweet yellow-orange flesh. It can range in weight from 8 ounces to 20 pounds, and ranges in shape from round to pear-like to long and thin. Very popular ingredient in drinks, salads, and desserts.

Pick-a-Peppa Sauce A mango-tamarind based spicy pepper sauce from Jamaica.

Plantain Plantains, or cooking bananas, are a staple across the Caribbean. They must be cooked to be edible; however, they need not be ripe. Green plantains and ripe plantains are often sliced, cooked in a seasoned batter and deep fried for fritters. Ripe plantains taste like a cross between a sweet potato and a banana. Tostones are green plantains sliced and fried, pounded flat and refried to form crispy chips.

Roti Exemplifies the heavy influence Indian cuisine has had on Caribbean cuisine. It begins with a round, Indian flat bread called a “roti” or “paratha” that is wrapped around a big dollop of curried goat, chicken, shrimp, pork or vegetables.

Salsas Intensely flavored “little dishes” halfway between a condiment and a side dish. These varied combinations of fruits, vegetables, spices, herbs and chili peppers add an intense flavor “kick” to any meal, and are simply and healthfully prepared.

Saltfish Saltwater fish which is salted and dried. Most often it is made with cod, but can be made with mackerel, herring or haddock. Served with Ackee as a specialty in Jamaica. Referred to as Bacalao on the Spanish-speaking islands, and Morue on the French-speaking islands. Bujol is a salted codfish salad made with onions and peppers.

Sofrito The basic components of this seasoning mixture are cilantro, bell peppers, onion, garlic, tomato, and sometimes chilies, additional herbs and salt pork colored with annatto. Sofrito is an important component of Asopao and numerous other Puerto Rican soups, stews and vegetable dishes.

Sorrel A tropical flower grown throughout the islands, it is boiled with other ingredients such as cloves, orange zest, and ginger, and then sweetened to make drinks, jams and jellies. The spicy-tart beverage is a beautiful raspberry-grape color, and is a Christmas tradition throughout the English-speaking islands.

Stamp and Go Codfish patties fried in heavy batter which has been flavored with onions, annatto, and chiles. Popular in Jamaica. “Stamp and Go” was a command given to 17th century English sailors when they had a task to do, like pulling on a rope.

Tamarind The fruit of a very large tree, it is a brown pod about 3-4 inches long which grows in bunches. Used in chutneys, curries and Worcestershire sauce.

Yuca Also known as cassava, or manioc, it can be eaten boiled, baked or fried. It is a long, slim tuber (like a long potato) with bark-like skin and very starchy flesh that becomes nearly translucent when cooked. It is used to make casareep, a bittersweet syrup, and tapioca, a common thickening agent. It is also ground into meal to make bread.

I’m making Caribbean Jerk Chicken Pasta, Rum Punches, creole baked goat cheese stuffed red peppers and Chocolate Pineapple Upside Down cake for the party. Come on over to 3 Sides of Crazy for the recipes and head over to OUR KrAzY kitchen for the party and to see what everyone else brought.

Thanks for including my in the party for Dave. It was fun and I love all of your great information.

Thanx for ue sweety words TAM…u made my day and added to the fun at the party…..
Loved brin am all to the party as muc as loved the badge that jus got to know was ur wonderful creation…..