My favorite comfort food is potato. When I was a little girl and didn’t feel well, my mother would make me mashed potatoes and carrots. This was the ultimate in comfort food because it was associated with recuperation and feeling good. This is better than chicken soup and we all know that chicken soup is the ultimate or so they say.
Since, I was eating alone, I took two medium potatoes and baked them through in a 375 degree oven, after a thorough cleaning.
To my surprise, at the end of an hour, they were cooked through but the skin on one had a gaping hole in the skin. This is one dish that the skin is a must.
I was going to make one stuffed potato and just mash up the rest when I spotted a muffin tin. Change of plans. I was now making Fully Loaded Potato Muffins. These were delicious. The potato was filled with goodies and I even used Baco Bits since I don’t eat bacon. The end result were these adorable muffins that tasted like something the angels made. Are angels into spices?
Stuffed Potato Muffins
Ingredients:
2 baking potatoes
2 ounces sharp cheddar cheese
2 ounces sour cream
1/2 onion, chopped
1 teaspoon butter
1 teaspoon salt
1/2 teaspoon black pepper
1 teaspoon Worcestershire sauce (without fish)
1/4 cup Baco Bits
Method:
Clean and bake potatoes at 350 degrees for 1 hour.
Cut potatoes in half and remove the potato from the skins.
Put potatoes aside.

Preheat your oven to 375 degrees.
Chop onion and saute with 1 tablespoon butter until golden brown.

Grate the cheese and add 3/4 cup of it to the cold potato along with the sour cream.
Add onions and Baco Bits to the potato, with the salt, pepper & Worcestershire sauce. 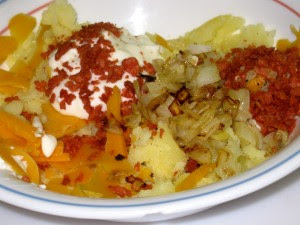 Spoon the potato filling into the muffin tins.

Sprinkle over the remaining cheese, giving each potato skin a light covering, and cook for 20-30 minutes until golden. 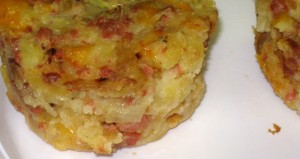 For Passover recipes, please go to Comfy Cook and My Sweet and Savory.

I have a huge savory tooth- and those look fantastic!

I love the way these are individual servings! Not that that would keep me from eating 5 or 6 or them 🙂

You might like the Dutch dish “hutspot” as it’s mashed carrots, potatoes, and onions. It’s a very good cold winter day food!

I love the new look. And twice baked taters in muffin tins? Myron Mixon would say that’s the best DAMN idea ever 😉

Good stuff Chaya! I make something similar that I call twice baked potato casserole. I wish I had it posted so I could link it up. I’ll have to make it again soon 🙂

That’s an awesome idea. I’m making them, that’s all there is to it.

Interesting….do you think these would freeze well? I think I’ll try them, thanks!
Kelly

I am a huge fan of this recipe!

Are you all still looking for someone to host “Save Room for Dessert”? I would love to, plus it would give me the opportunity to make more dessert! Please let me know what you think. Thanks!

This is a dish the entire family if just going to love! Thank you Chaya.

Oh dear Chaya ,loved catching ya here with all ur delicious super recipes ….
cheers and fantastic day to ya…..

My kids will LOVE these! Thank you!
xoxo Pattie

I can’t wait to try these, they look and sound awesome. Potatoes and carrots both are comfort food for me too. Carrots are my all time favorite go to vegetable!