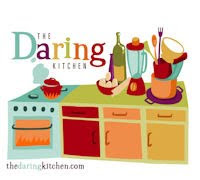 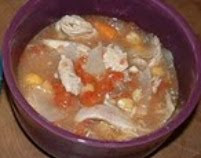 According to Wolf, “Brunswick Stew has a long, and oft debated history. Brunswick, Georgia claimed that the first Brunswick Stew was created there in 1898. There is, at the Golden Isles Welcome Center on Interstate 95, a bronzed stew pot with a plaque proclaiming this fact.

However, Brunswick, Virginia claims that the first Brunswick Stew was created there by a camp cook named Jimmy Matthews in 1828, for a hunting expedition led by Dr. Creed Haskings, a member of the Virginia State Legislature for a number of years. He was said to have used squirrel in the original Brunswick Stew created for the group when they returned. The hunters were at first skeptical of the thick, hearty concoction, but upon tasting it, were convinced and asked for more.

Every year, there is an Annual Brunswick Stew Cookoff that pits ‘Stewmasters’ from both Virgina and Georgia against their counterparts, and takes place every October in Georgia.

In the early 20th Cent, the rivalry of the two Brunswicks helped make this dish as popular as it is today, and it quickly became a pan-Southern classic. Some recipe call for the original addition of squirrel, but most allow for chicken, turkey, ham, or pork, even beef on occasion. Rabbit is also used. The vegetables can vary widely from variation to variation, however, the Brunswick Stewmasters recipe says *exactly* what is used in competion stews, and states that “Adding any additional ingredient(s) will disqualify the stew from being an original Brunswick Stew.”

However, most agree that, Brunswick stew is not done properly “until the paddle stands up in the middle.”

The first recipe is more traditional – long and involved, as can be many Southern recipes. The second was the very first Brunswick stew I ever tasted. Both are fairly straight forward and easy, requiring no special equipment, techniques, or super hard to find ingredients.”

Recipe Source(s)- I’ve included two different recipes for this Challenge, out of the hundreds of variations out there. The first is from “The Lee Bros. Southern Cookbook: Stories and Recipes for Southerners and Would-Be Southerners” by Matt Lee and Ted Lee”, and the second from the Callaway, Va Ruritan Club, who hand out cards with their recipe printed on them, every year at the Blue Ridge Folklife Festival, and where I tried my first ever Brunswick Stew.

Blog Checking Lines- The 2010 April Daring Cooks challenge was hosted by Wolf of Wolf’s Den. She chose to challenge Daring Cooks to make Brunswick Stew. Wolf chose recipes for her challenge from The Lee Bros. Southern Cookbook by Matt Lee and Ted Lee, and from the Callaway, Virginia Ruritan Club.

Variations allowed- Recipes may be halved if you choose. You may substitute any vegetables you don’t prefer. You may use fresh, canned or frozen vegetables. My variations are included in the notes. For example- some recipes include okra in their stew, others use creamed corn. You may sub out the rabbit for pork, turkey, beef, or even another game animal if you have it available.

Mandatory- You must use one of the two recipes provided. Now, to not exclude our vegans/vegetarians, if you’d like, use vegetable stock and leave out the meats. It won’t be a ‘true’ Brunswick Stew, but it’ll have the spirit of one.} There’s no gluten anywhere in this that I’m aware of, so we’re good in that regard.

Optional- Not required for the Challenge-but I always make my own broth!
Sunday Chicken Broth

From “The Lee Bros. Southern Cookbook: Stories and Recipes for Southerners and Would-Be Southerners” by Matt Lee and Ted Lee
Makes about 1 quart (4 cups or 919.68 grams or 32.303 oz)
Estimated Time- 1 ¼ hours

Place bones/trimmings in medium stockpot and add onion, parsley, celery and bay leaves. Add wine and water, liquid should cover all ingredients, if not, add more until it does. Bring to vigorous simmer over high heat, then reduce heat and simmer gently for roughly 45 minutes to an hour, skimming any scum or fat that comes to the surface.

Strain broth into bowl through fine mesh strainer. Discard the solids. Measure what you are left with, if not planning to further reduce, then salt and pepper to taste.

Store in tightly sealed container in refrigerator until the remaining fat congeals on the top. Remove the fat, and unless not using within 2 days, keep tightly sealed in the refrigerator. Otherwise, freeze, and it will keep for upwards of a month.

Great job on your stew! it looks fantastic!