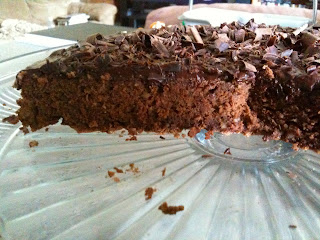 I was feeling a bit ambitious one day and decided to tackle a recipe which had been haunting me for quite some time, ever since I heard of its use in the movie Julie & Julia.  Then I watched the movie and saw the Reine de Saba (Queen of Sheba) cake and knew I had to make it happen.
Fast forward a few months to the day when it actually DID happen.  This cake is quite unlike anything I have ever eaten before.  That extraordinary taste and texture totally made up for the extra bit of time it took to make the cake happen.  I can only imagine that the use of egg whites lends that lighter-than-air texture, and you can really taste the almond extract.  Heaven!
If you have a little time and a little patience, I beg of you: Please, make this cake.  It completely lives up to its reputation as one of Julia’s best recipes!
I’m going to go lighter than usual on the pics since this is a rather long process and I don’t want to make the post even longer!

Reine de Saba (Queen of Sheba)
3 ounces sweet baking chocolate
1 ounce unsweetened chocolate (I used a total of 4 ounces of semi-sweet chocolate)
2 tablespoons dark rum or strong coffee (I used water for this – no rum on hand and a coffee hater in the house)
4 ounces (1 stick) softened unsalted butter, at room temperature
1/2 cup sugar
3 egg yolks
The egg whites
3 room temperature egg whites (a scant 1/2 cup)
1/4 teaspoon cream of tartar
A pinch of salt
2 tablespoons sugar
1/3 cup blanched almonds pulverized with 2 tablespoons sugar
1/4 teaspoon almond extract
1/2 cup plain bleached cake flour
First I pulverized the almonds in the food processor along with 2 tablespoons of sugar.  The sugar helps keep the natural oil in the almonds from making everything stick together.  By “pulverized” I mean I chopped and chopped and chopped until I couldn’t chop no more.  They were as small and crumbly as they were going to get and were just flying around the processor so I decided enough was enough.
Once this was done, I beat the butter in the stand mixer until it was light and fluffy, then added the sugar and beat it for another minute.  Then the egg yolks joined the party and everything got all mixed up and transferred to another bowl in order to make room for my egg whites once their time came.
Julia’s method for melting the chocolate and rum/coffee involves a double boiler system where water is heated until it simmers in a large saucepan, into which a smaller saucepan with the chocolate and liquid is lowered and allowed to rest for 15 minutes until it is all melted and smooth.  I did things her way.
Once melted, the chocolate gets mixed in with the egg yolk mixture.  Along with that goes the pulverized almonds and almond extract.
Sidenote: I love almond extract and I don’t care who knows it.
THEN it’s time to whip the egg whites in your nice, clean bowl.  First beat them for only a minute or two until they are foamy.  Add the cream of tartar and pinch of salt, then continue to beat at a higher speed.  When you’ve reached a soft-peak stage, add the sugar and whip until stiff peaks form.
Take about 1/4 of the stiff egg whites and mix them into the chocolate mixture.  Then fold in the rest, alternating with sprinkles of cake flour, until everything is incorporated.
Whew.  This chocolaty mess goes into an 8 inch buttered and floured cake pan and into your 350 degree oven for 25 minutes.  Then it needs to cool for at least 2 hours.
Time for frosting!
2 ounces sweet chocolate
1 ounce unsweetened chocolate (again, I used all semi-sweet)
1 1/2 tablespoons rum or strong coffee (this time I used milk instead)
A pinch of salt
3 ounces (6 tablespoons) unsalted softened butter
Pretty easy, this part.  Melt the chocolate and liquid of your choosing, using a double boiler system (this time I used a glass bowl over a pot of simmering water) and once that’s melted, add the butter one tablespoon at a time and incorporate.  Don’t forget that pinch of salt – it does wonders!  After this is cool, beat until thick enough to spread.  It will be quite thin prior to cooling, but once it has cooled it transforms into a lovely, smooth frosting. 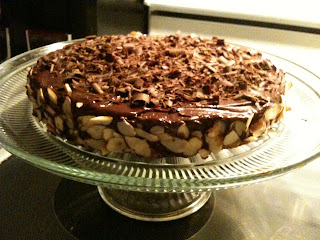 I used sliced almonds and chocolate curls to decorate – use your imagination!

Make.  This.  Cake.  It’s exquisite and well worth the time.  It would be great as an impressive dessert for a special gathering!

OMG Jen, I NEED this cake. Gorgeous, and that’s a lovely cake plate.

P.S. I love almond extract too!

Your ambition paid off! It looks absolutely perfect.

Chaya – DEFINITELY something for a special occasion! It’s a real “wow” kind of cake.

Gorgeous presentation, Jen. This is definitely one to try.

What a beautiful cake! You did a great job with this one. Thanks. I have to remember this one, for a special occasion.