I was making some blackened pork chops last night (Gee…..where could I have gotten that inspiration, Dave?) and thought some red beans and rice would go perfectly with the chops. I used one of Emeril’s recipe as a guide and then made it with what I had on hand.

Serves: I dunno, probably a small nation like the size of Aruba, it makes a lot.

Instructions
Got my “mess in place” ready while the fire was getting started in the grill. 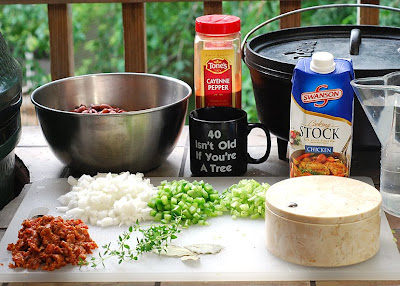 Saute the sausage for 1-2 minutes until it starts to brown. I did this in a cast iron dutch oven that was preheated on a 350f grill. Then add the onions, peppers, and celery and continue sauteing 5-7 minutes until softened. (Note: If your chorizo doesn’t render a good bit of pork fat, you might have to add some bacon grease or other fat before adding the veggies.) 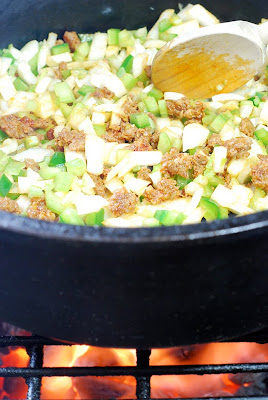 Then “put everybody else in the pool”. Bring to a boil for a few minutes, reduce heat and simmer (I cut the temp of the grill down to 300). 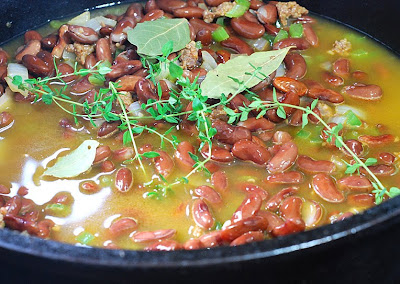 This is where I kind of screwed up. During the prep, I must have commented 3 times that this seemed like a lot of liquid and veggies compared to the quantity of beans. Even after cooking an hour, the liquid really hadn’t reduced much. It was about this time I realized that I had used only a 1/2 pound bag!! I remedied that by adding two cans of drained kidney beans and it all worked out okay.

The total cooking time was about two hours. I smashed some of the beans against the dutch oven with my wood spoon per Emeril’s advice. Served them with rice, hot sauce, and my blackened pork chop. 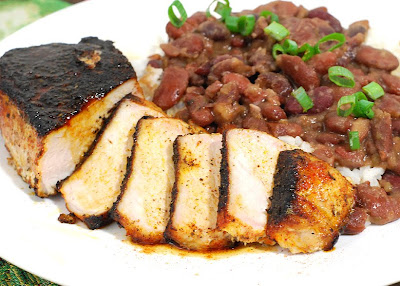 The whole family loved the beans with the chops, my boys both even got seconds.

Speaking of cajun and creole foods, last week at the food blogger get together at Larry’s, Katherine of Smoky Mountain Cafe (she’s from Cajun country) made REAL jambalaya that made my mouth jump a happy dance. The best jambalaya I’ve had.

What is your favorite cajun or creole based dish?

You certainly made this a special meal. Funny, how a few changes make for a great dish and not just a good one.

Yummy Chris! I’ll be by your blog for some catch up this weekend 🙂