Taste and Create was started as a food event by Nicole from For the Love of Food. This is the 2nd time I’ve participated in Taste and Create and I don’t plan on stopping soon. I enjoy meeting new bloggers, especially foodies. 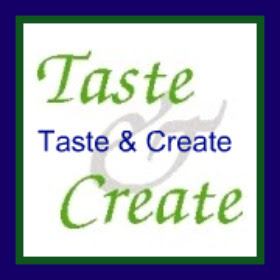 The whole purpose of Taste and Create was, and has been, and continues to be to create a community of bloggers who test each others’ recipes and share links. The participants of the event are paired together and try a new recipe from one another’s blog.
My partner this month is Stephanie over at 52 Kitchen Adventures who has some wonderful recipes.  I love anyone who will pair bacon and chocolate together as she did with these cupcakes. Honestly I wanted to make those cupcakes, but I have already made the caramelized chocolate covered bacon and decided to venture deeper into her list and fell in love with the Asian Style Latkes.  I have made my own latkes or potato pancakes for years, but love the flavors that Stephanie’s recipe adds to the mix.
Stephanie wrote, “At my local farmer’s market, there is stand dedicated to Asian produce. I’ve found some interesting vegetables there, and the other week I saw what looked like ginormous white carrots (reminiscent of Bunnicula, the vampire rabbit who sucks the juice out of vegetables). It turned out to be daikon. Daikon literally means “large root” in Japanese, which is pretty accurate. It has a flavor similar to smaller radishes, but is slightly sweet. It’s pretty low in calories and has a high Vitamin C content.” and she could have been writing about my new local farm fresh produce market in my temporary home town.
She found that daikons are used in a dim sum dish called turnip cake which is a pan fried cake of shredded daikon with dried shrimp, mushrooms and Chinese sausage. I agree that the original recipe sounds great, but agree with her recipe changes which resulted  in a latke make of shredded daikon and potato. The Chinese five spice gives the latkes a deliciously savory and sweet flavor.  Hubby loves turnips and asked that next time I include turnips. 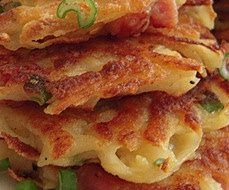 ASIAN LATKES
Grate the daikons and potatoes. Place grated pieces into a clean, dry towel and twist and squeeze out moisture over the sink. Keep squeezing and twisting the towel until no more liquid comes out. Place dry gratings into a large bowl.  I didn’t have anyone around to help with pictures so I offer you Stephanie’s picture for demonstration.

Sliver the green part of the green onions and reserve for garnish. Chop the white part of the green onions and add to the bowl of daikon and potatoes, along with the egg, breadcrumbs, and seasonings. Thoroughly mix together with your hands, then form flattened balls (these can be any size you want, just make sure they are all uniform in size so they cook evenly).
Fill a large sauce pan 1/4″ deep with olive oil. Heat over medium-high heat until very hot (when a piece of bread browns in 10 seconds, it’s ready). Carefully place the latkes into the pan, leaving a couple of inches in between them. Turn them after 7-10 minutes, or when browned on the bottom. Cook another 7-10 minutes, or until both sides are browned. Garnish with green onion slivers and serve with sour cream or applesauce.

These would definitely be good with turnips! Glad you enjoyed them 🙂