Print
I paced the meat department and produce department a couple of times trying to find something to inspire dinner for me. It was just one of those long days at work, it was hot out, and nothing was capturing my attention.
I called my wife and 21 y/o son, but neither of them had any suggestions either. Don’t you just hate those kind of days?
So I called the 10 y/o and without hesitation, he offered, “Salmon or cordon bleu.”
Not burgers or pizza…..he wanted salmon or cordon bleu. He’s a good kid;)
Cordon blue it is. This is a Fire Day Friday item, but you can do it just as easily in your oven. (But I do think the hint of cherry wood from the fire roasting is a nice addition.) 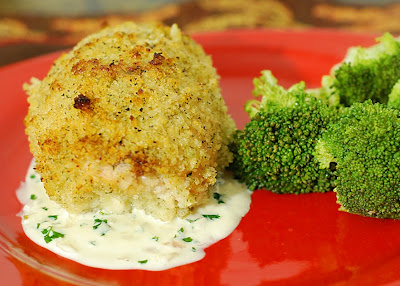 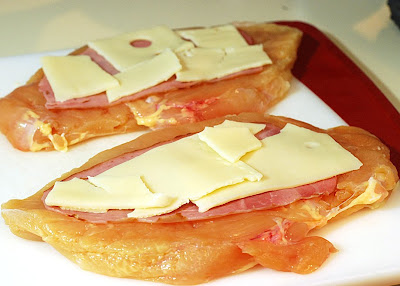 Roll the chicken up lengthwise and seal up as best you can, using toothpicks to secure the edges. Make an egg wash by whisking the egg and 1 Tbsp ice water. Roll the breast in the egg wash and then the panko. Place in a baking dish. Top each with 1 Tbsp of butter. 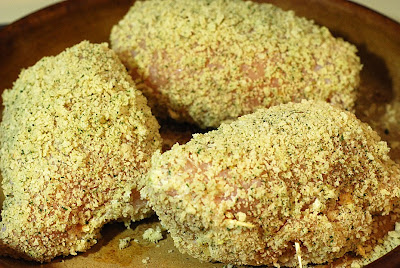 Preheat your grill or oven at 375f. For grilling, you should set up for indirect heat (fire/burners to the sides but not directly under the cooking area). Cook them for 30-35 minutes with the lid closed until the breasts hit an internal temp of 160f. Don’t worry if some of the cheese starts leaking out, it happens. 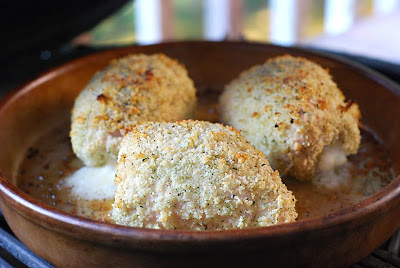 When the cordon bleu come off, let them rest in a 200f oven or warming drawer and start the sauce. Melt the butter and saute the shallot over medium high heat for 2-3 minutes. Add the wine and continue cooking until the wine is almost evaporated.
Reduce heat to medium, whisk in the cream and parsley. Cook until the volume is reduced by half. Season to taste with salt and pepper.
When ready to serve CAREFULLY REMOVE ANY TOOTHPICKS YOU USED to seal the chicken. Ladle some of the sauce onto the serving plate and top with a cordon bleu. 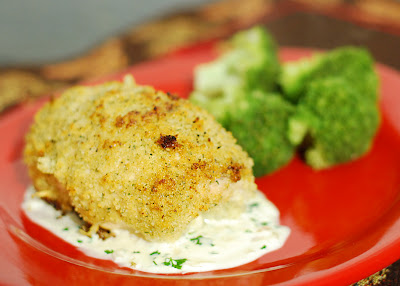 This was the first time I’ve done cordon bleu on the grill but it worked out very well and the family devoured it. I’ll be doing this one again, for certain!
Have a grillin’ weekend!
Previous Next

Yes I too hate days like that, I only wish I had a 10 y/o at home that was so decisive.

You make it look so easy, I would of been happy the way it was, then you added a delicious sauce too! I have that same round stoneware pan, but never thought to use it on the grill!

Check out the big bad brains on Chris! Good idea and even better looking outcome as usual. Your photography is great and your blog organization is spot on. You need to do a Florida tour soon.

Looks awesome Chris. Good to know they can be made on the open flame.

What is it with the younger kids – same here – oldest would have said, “Whatever” and the youngest always picks something involved and yummy – ironically the middle son always abstains!

I’ll join in the praise of “the kid”!

After seeing how good that dish looks, I am going to ask Ms. Goofy if we can buy a green egg. Well at least I can try.

The weekend has officially begun! This has to be the tastiest thing I’ve come across so far today!
Yummy!

Your ten year old has pretty sophisticated tastes. Most would have suggested hot dogs or “chicken fingers”

I have a couple of cordon bleu recipe floating around that I want to try but I never would have thought of fire roasting them like this! Looks awesome!

Looks delicious Chris! My older son would have asked for the burgers or pizza, but the younger one is like yours 🙂

Happy Friday to all!

Looks great! I’ll try it in the oven – we never know the temperature of our grill.

Way to go, Chris! I am printing this and will definitely try it! The chicken looks delicious and I love the texture the panko surely gives it! Thanks for the recipe!

Delicious looking dish, Chris. Yet another thing I would never have thought of doing on the grill and you did it! It sounds like you are raising a junior foodie – love it!

What a kid! and what a dish!