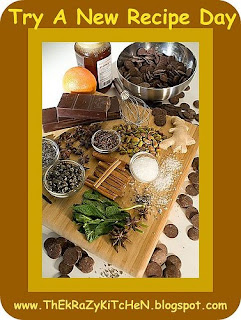 For a while, we had a Schwan’s delivery guy who said he used to be chef. He said he was “Irish-Mexican” and that his dream job would be cooking on a ranch like ours. He was large, round, friendly and nice, and we talked quite a bit about food. He shared the ingredients for his “secret” Green Chile, and I wrote them down. I didn’t write down the technique, amounts, or anything else, so the first time I made this, I winged it. For a last-minute dinner for 14 hungry cowboys. Everyone loved it!
This is a nice, filling stew, perfect for a fall day.
Just so you know, here are all the notes I started with:
Green Chile—
chicken stock
roasted green chiles
chicken bouillon
cumin
mexican oregano
pork sirloins or chicken
cornstarch to thicken (don’t if freezing)
pureed tomatoes
And that’s all I got. He said that green chile is “peasant food” or something to that effect, and that he used to make and serve it in a restaurant where he cooked. He also said something about feeling okay to share the “recipe” with me because I live in the middle of nowhere, basically “who are you going to tell?” Ahem.
But, you know, I made this up as I went along, and I also added more ingredients, and completely improvised the method. So it’s not really like I divulged any big secrets here. I don’t think, anyway, given the end result.
I pulled a 5-pound package of pork loin ribs out of the freezer, but didn’t realize that they were not boneless, but that’s all I had. That’s okay, since I was cutting the meat up anyway, I just had an extra step of removing all the bones. Incidentally, the slab of meat wouldn’t fit into our microwave for defrosting, so I did it a different way: I stuck it into the biggest frying pan I have (it didn’t all fit, some was sticking over the edge), put a cup of water in the pan and perched the lid on top of the meat. I turned it on medium to sort of “steam-thaw” it until I could get the ribs apart and cut them into bite-size pieces. It worked pretty well, I just tried not to cook the meat very much in the process. It would be much easier with advance notice (instead of, “Do you think you could make dinner for us tonight? There are 14 of us”) and having meat that was thawed.
Yesterday, I used boneless country pork ribs that I had already thawed, so I didn’t have any pork “broth.” I just used all chicken broth instead.
And although this started out to be a somewhat “authentic” Chile Verde, it ended up being something quite different. I embraced the “peasant food” label and ran with it, boiling and straining the pork rib bones for broth, adding ingredients that we had in the pantry to extend the recipe when I didn’t think it looked like enough to feed 14.
It was a bit too spicy for the kids…If you’re concerned about it being too spicy, just leave out the can of jalapeños and reduce the cumin.

Don’t forget, this recipe serves 14 with some leftover. You can half the amounts of everything if you wish, although it’s sooooo good, I don’t know why you would. Also, I always always forget to add the tomatoes at the end. I’m going to go ahead and call them “optional.” =) 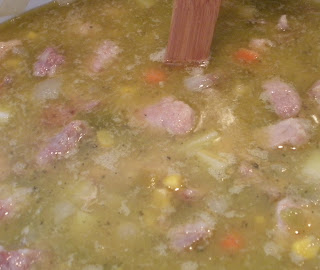 Min’s Pork Chile Verde Stew
serves about 14
Butter
Olive oil
5 pounds boneless pork ribs
1 cup flour
1 1/2 yellow onions, diced (about 2 cups)
2 carrots, peeled and cut in 1/4-inch dice
4 cans chicken broth (2 cans if using pork “broth”)
7 cubes chicken bouillon
4 4-ounce cans fire-roasted diced green chiles
1 4-ounce can fire-roasted diced jalapeños
6 to 8 red potatoes, washed and cut in 1/4-inch dice
1 can garbanzo beans
1 can whole kernel corn
1 tablespoon cumin (or to taste)
2 teaspoons Mexican oregano, crushed
1 can diced tomatoes (optional)
Kosher salt and freshly ground pepper to taste
Pour flour into a large ziploc bag. Cut pork into 1/2-inch pieces, add to ziploc bag, seal and shake to coat. Starting with two tablespoon each, add butter and olive oil to a large soup pot over medium heat. Remove pork from flour with a slotted spoon, and fry in butter and oil until golden brown and cooked through, stirring occasionally. Remove cooked pork to a plate, and repeat until all pork is cooked and on a plate, using more butter and oil as necessary in equal amounts.
Add diced onions to the pan, along with an additional tablespoon each of butter and olive oil, if necessary. Saute over medium-low heat until onions are translucent. Add carrots, stirring in and cooking for a few minutes. Add chicken and pork broth, and chicken bouillon cubes. Return pork to the pot.
Add everything else except tomatoes, salt and pepper, and stir well. Reduce heat to low, and simmer until potatoes are tender. Stir in tomatoes and warm through. Taste and adjust for spices, add salt and pepper if needed.
Serve with tortillas or crusty bread on the side and plenty of Corona.
Don’t forget to visit me at The Bad Girl’s Kitchen for more fabulous recipes!

Thanks for all the comments! Don’t worry, the Schwan’s guy doesn’t know about my website…and I really wouldn’t even say he gave me a “recipe.”

I just use whatever kind of pork I have, and yeah, I usually need more notice too, but around here you do what ya gotta do when there’s a crew to feed.

I have a chili verde that I’ve been waiting to try during the first cold snap and other than using pork shoulder, it seems close to yours.

I can believe you cooked for 14 without notice, I need much more planning and prep time. Looks like you pulled it off well, great job!

Definitely sound like a great meal for a bunch of hungry cowboys! Just hope after this post you don’t get hate mail from the Schwan’s guy! LOL!

I could go for a bowl of that right now! Looks so good…

YUMMY Min this sounds fantastic! Gotta love those Schwann guys – mine up in the U.P. shared a few Finn recipes too and he was a guy who looked like he loved to eat. Some say if you change as little as 2 ingredients or methods you “own” the recipe. I think you truly made this yours!

This is just good food! I love verde sauce and verde chili. Great background story, I like hearing how recipes came about!

thanks for following my blog!