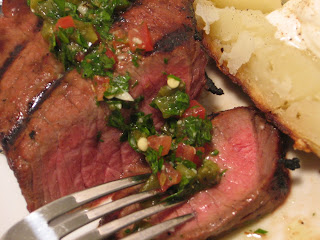 First, I must say thank you to Chris for asking me to guest post for him.  I was so excited when I received his email!  I love to grill…actually, love doesn’t even describe it correctly, it’s more than that…grilling is in my blood.  For me, being asked to guest post on Fire Day Friday is like a home cook being asked to star in their own show on the Food Network!!
But enough with this embarrassing gushing, let me introduce myself.  I’m Jenn from Jenn’s Food Journey.  I have a love affair with cooking and, of course, grilling.  I had no desire to cook when I was younger.  Yes, I loved to help my mom or my grandma with certain little tasks in the kitchen, but that was it, I didn’t want to do the whole shebang.  It was much later in life when I found the passion and love I have for it now. Grilling is my true love, though.  When my boyfriend and I moved into our house together, my parents gave us the best house warming gift ever: A GRILL!!  As soon we got it set up, I immediately wanted to start cooking on it.  From that point on, I grilled 6 nights a week for 3 months straight. (Seriously!)  Despite all the hours standing at the grill, I still do not claim to be a master griller (is that an actually word? who cares, I like it)…but every now and then I truly shock myself with my creations……like this one I’ll be sharing with you today…yes, I’m finally getting to why I’m really here!! 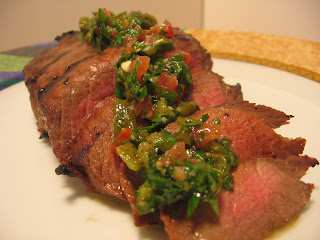 I made my first Chimichurri -an Argentinean sauce similar to pesto- back in August.  I had recently come in possession of Steven Raichlen’s Planet Barbecue and knew his recipe for chimichurri would be one of the first ones I would try.  When Chris asked me to guest post my mind immediately started turning…what was I going to make?  I sorted through files with all kinds of grilling recipes and could not come up with a good idea.  Then it hit me.  I had a London Broil in my freezer that I had been wanting to use, why not do something with that?  (And by the way, I found out after purchasing this particular cut of meat, that London Broil is actually the way you prepare the cut of meat, not the cut itself.  London broil is broiling or grilling flank steak.  So even though the cut I bought said London Broil on the package, it’s really a cut of flank steak….I learned something new I guess!  So don’t worry if you can’t find “London Broil”, it’s really just flank steak!!)  Once I knew what kind of meat I was going to use, I started thinking about what to do with it.  Marinating?  Yes, that would be a good start.  A sauce maybe?  Well, yes, of course, I am a self proclaimed sauce lover.  But what kind???  hhhhmmmm… I have jalapenos…what about a fire roasted salsa of some kind??  DING! (that’s the light bulb going off in my head by the way)  The spicy chimichurri was born!  I am one that loves heat, you may not be, so to tone down this recipe, you can just use jalapenos, or better yet, use an Anaheim or poblano pepper instead.  Either way, this chimichurri will work fantastic on any cut of beef, chicken, or pork.  I hope you enjoy it as much as we did!

In a resealable bag or baking dish, mix together all the marinade ingredients.  Place the London Broil in the bag, seal, and marinate for at least 4 hours, but 8-24 is recommended. 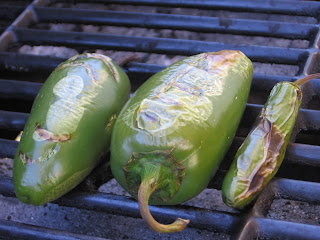 Fire roast your garlic and peppers.  For the garlic: place unpeeled cloves in a square of foil, drizzle with olive oil, season with salt and pepper, and seal foil around it.  Place on preheated grill for about 5 minutes, or until the garlic becomes soft.  Squeeze garlic from the skins, mash with side of knife and mince.  For the peppers: rub with a little olive oil and place directly over the fire on the grill grates.  Allow to cook until the skins are black and blistered, about 8-10 minutes.  Place peppers in a bowl and cover with plastic wrap for 5 minutes.  When peppers have cooled a bit, peel skin, remove seeds, and then finely dice.
Heat grill to 350-400 degrees.  In a bowl, combine the garlic, peppers, and oregano.  Stir in the lime juice.  Add the parsley and the olive oil and mix to combine.  Fold in the tomatoes; set aside. 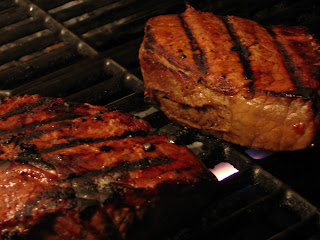 Remove the steak from the bag and discard the marinade.  Place the meat on the grill grate directly over the fire and close the lid.  Allow to cook for 4-10 minutes on each side, depending on your desired doneness. (Rare: 120-125 degrees; MedRare: 130-135 degrees; Medium: 140-145 degrees; MedWell: 150-155 degrees; WellDone: 160 degrees).  Remember to take the steak off about 5 degrees sooner then your desired doneness, they need to rest for at least 5 minutes and they will continue to cook.  Serve with chimichurri and enjoy! 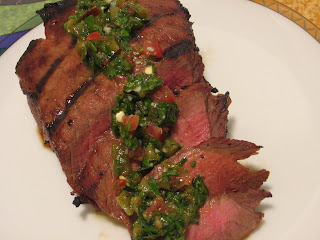 Thanks again, 100x over, Jenn! Like I’ve said over and over, you rock!

great job Jenn!! I love chimichurri, and your sauce looks delicious!! Thanks for such a great guest post!

That sounds awfully tasty! I finally got out and braved the grill for the first time this summer! Before that only my husband did it. I’m so glad I did! Now that I know how to do it, I feel like I can grill anything!

Welcome Jenn! This sounds amazing! I have always done the grilling at our house…my husband starts the grill(I figured I’d let him do something).

Hi Jenn and welcome to Our Krazy Kitchen! Absolutely loved this delicious guest post, and love that you are a grillin’ girl 🙂

Thanks everyone…it was great to be a guest blogger here! Glad you all enjoyed the post.
Velva… I agree 100%!!
Cheeseboy…. thank you 🙂

Awesome guest post. This is a wonderful grilled flank steak recipe, The chimuchurri is just over the top.

I love to see women grill. Seriously. I think more women would enjoy grilling, if they would take the grilling tongs from the guys.
🙂

Oh my, my mouth is watering

This is the best recipe I have ever seen Jenn do. She saved the best for your blog. I am so hungry now.

I love this dish… the flavors are amazing! I think I know what I want to make for dinner.

Welcome to the gang Jenn! This looks and sounds amazing. We were going to grill on Sunday, I just hadn’t decided what yet so now I know. Thanks!