The (3rd Annual) NEED TO KNEAD has moved to OUR KRAZY KITCHEN.
We all have some favorite family bread recipes tucked away.
I know that at certain times I have the NEED TO KNEAD, primarily during the holidays or from October through April, those long cold months of winter. The rest of the time my Bread Machine Rules.
I thought we could all come together and share our daily bread recipes.
And I mean all breads! White, wheat, banana, braided, etc…  whatever you’re in the mood to share.
Ironically National bread month is November at the beginning of our holiday baking crunch.

Just post your recipes anytime until November 15, 2010, go over and link up at OUR KRAZY KITCHEN so that we can all visit you. You can even link to recipes you have previously posted. Add this button to your participating posts and link to this blog. Your blog can be in any language, but a translator on your site will help any who don’t speak the same language. 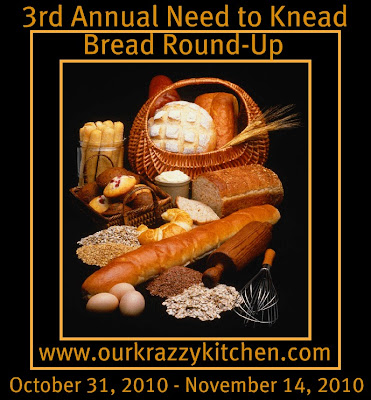 Thank you, Tamy! For hosting the Bread Round-up here. I’m looking forward to the link. Have a great day.
Kristy