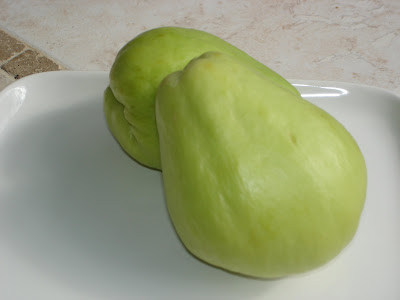 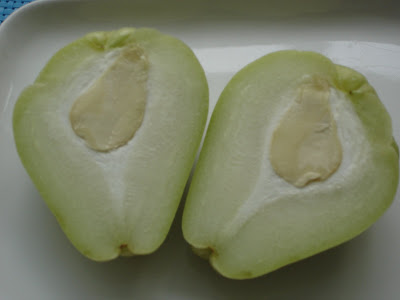 Pronounced [chah-YOH-teh], the chayote is another native Mexican plant and is a member of the squash family. It is also referred to as a “vegetable pear” or chcocho. In France the chayote is called a christophene. The flesh is quite crisp something like a water chestnut. Quoted from Gourmet sleuth.com

Chayotes squash is easily found in the supermarkets around here and very inexpensive. They are very mild in taste, and are also known as mirlitons. In New Orleans they use them in a stew like dish with shrimp.
I love this dish and have made it several times. It originates in Guatemala. I can’t decide whether to eat it for breakfast, a side dish or what. However you decide to eat it, it is good. Originally they have you scoop out the squash and use the shells like a twice baked potato, but I find the skins are way to flimsy. So I use ramekins or an individual baking dish instead.

Chayotes Rellenos
4 chayotes
2 tablespoons butter
1 shallot minced you can use onion, but the squash is so mild I use shallots
2 T salsa verde*
2 T Parmesan cheese
2 eggs well beaten with salt
4 ounces queso fresco crumbled
some shredded Monterey jack cheese to top with
salt and pepper to taste

Cover the chayotes with water, bring to a boil, and let them cook over a medium flame until they are tender (about 30 min). Drain and allow to cool.
Cut the chayotes in half, and scoop out the flesh carefully. Mash the flesh well and leave it to drain in a colander for a few minutes. Preheat the oven to 400 degrees. Melt the butter and cook the onion, without browning, until they are soft. Add the mashed chayote and let the mixture dry out a little over a low flame. Add the eggs, and stir them as you would for scrambled eggs until they are just set. (about 1 minute). Stir the crumbled farmer cheese, parmesan cheese, and salsa verde into the mixture. Stuff the chayote shells. Place on an ovenproof dish. Sprinkle with Monterey Jack cheese on each chayote half, and cook in a 400 degree oven until melted and golden about 15 minutes. I topped mine with some finishing salt.

*you can use store bought or make your own I posted a recipe on Aqua Sunday . 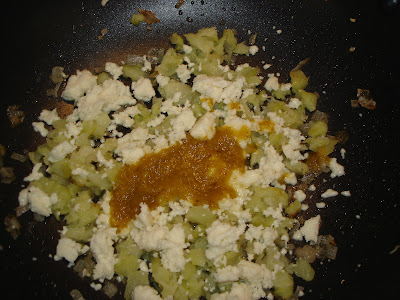 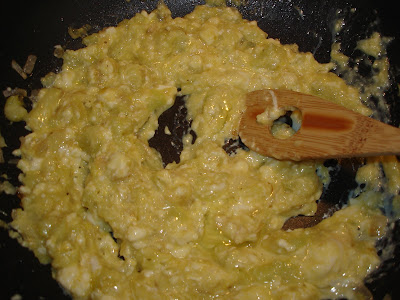 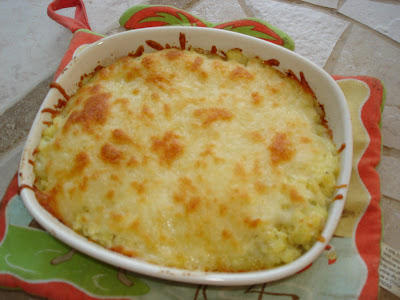 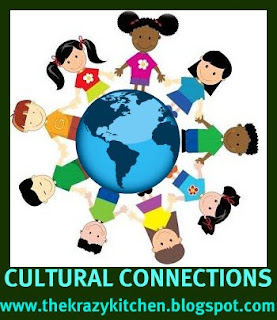 I sure wish this family would eat squash – this looks scrumptious!

Hi All, Love the Mexican vibe. Would love for each of you to post pictures of your Krazy Kitchens on Dec. 1st. Dave said you would. Don’t you love our guy? All you have to do is go to my post about the Second Annual Kitchen Reveal and leave a comment saying you will particpate and then when you post your kitchens on Dec. 1st, I will link to all of your posts on my blog so everyone can see our kitchens. Hope you want to particpate. Happy Thanksgiving.

Like PP’s I’ve seen them in my Mexican grocery store & knew what they were but had NO idea what to use them in. This dish looks really tasty. I’ll have to buy a few chayotes and make this, rellenoes are delicious so how can this be bad, right? 🙂

I have seen these at the supermarket and had no idea what they were; thank you for this great post; I will give them a try.