It’s Fire Day Friday and the day after Thanksgiving, so naturally you’d expect me to write about the turkey I smoked yesterday, right? 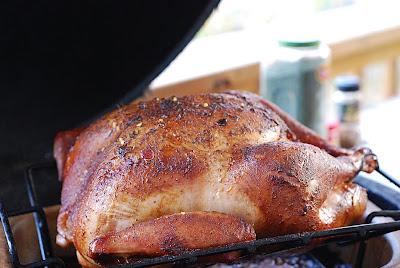 Brined in bourbon and maple syrup and then smoked with hickory/cherry wood, it was a spectacular bird. However, I want to tell you about the soup we made instead. I’m used to making a great turkey but this was my first time ever cooking acorn squash. 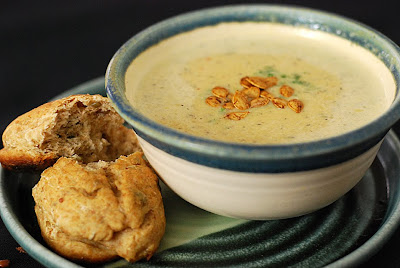 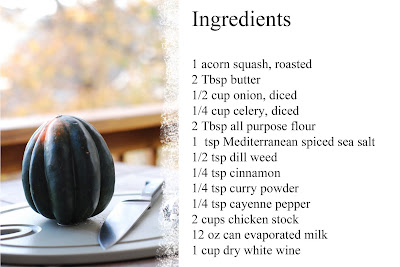 I set up Alexis’ Big Green Egg for indirect heat and got it settled in at 350f. While it was preheating, I halved the acorn squash and removed the seeds. (Note: Keep the seeds, toss with some oil, salt and cinnamon then roast for a tasty treat or garnish.)

I roasted the halves cut side down for 35 minutes while I was also roasting some sweet potatoes. 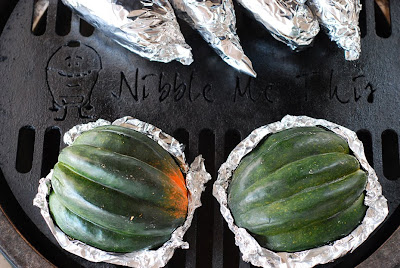 Then when the turkey was getting close to being done later that day, I made the soup. I could have done this stove top, but it was a gorgeous day with a record high temp of 74f so I could not resist being out on the deck. (NOTE: I don’t know what the heck happens at the 2:21 minute mark, skip to 3:15)

Saute the onions and celery over medium high heat for 5-8 minutes, until softened.

Whisk in the chicken stock and bring to a simmer.

Whisk in the evaporated milk and bring back to a simmer.

Stir the the acorn squash and heat through.

Let cool slightly and then process in small batches in a blender. I tried just using an immersion blender but found that I had to use a real blender to get the texture I wanted.

Season one last time with salt/pepper to taste.

Garnish with roasted seeds and parsley.

The soup was rich and had a velvety texture. The down side to it was that it was filling and put a dent in how much I could eat when the main course and sides hit the table.

Great looking soup with much TLC!

I am still laughing over your ‘not a hand model’ reference! One of the best episodes ever. Your soup looks excellent! I haven’t met a squash or a soup I didn’t like!

I can just imagine how good your turkey was brined with maple syrup; wow. Your soup recipe is very tempting.