I have to admit, this post started off as a joke.  It turned into something actually pretty good and just in time for the big game this weekend.

I had a pound of ground pork and was trying to think of SOMETHING to make for Fire Day Friday.

As I struggled with what to make, Alexis taunted me with, “I could always go through drive through at McDonald’s.”

“Or I could always make a McRib,” I dodged and parried.

And from humor, inspiration arose.  I had a McRib last fall and wasn’t enamored.  I thought about how to capture the spirit of the McRib without all of the yuck factor for a processed pork patty.  I would need a good binder without all the chemicals and such.  So I decided to use potato starch and an egg yolk to make it hold together.

The good news is that these did NOT taste like a McRib.  These are a tasty BBQ pork burger that my kids just devoured.  A half of one each was enough for Alexis and me.

Peel and cube the russet potato into 1″ pieces.  Boil until fork tender, about 8 minutes.   Shock the potatoes in an ice bath for 5 minutes.

Smash the potato through a ricer into the ground pork (or finely mash potato with a fork and then add to the meat).

Whisk together the egg yolk, BBQ rub and black pepper.  Mix together with the meat/potato mixture.

Preheat your grill to 450f (medium-high).  Cook the patties 4-5 minutes per side until they reach an internal temp of 165f. 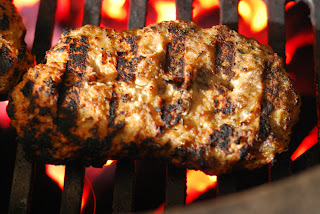 Liberally glaze the patties fresh off the grill with your favorite sweet BBQ sauce.  The real McRib is DUNKED in sauce and it drips everywhere.  Let rest for 5-10 minutes.

Serve on a hoagie bun with sliced onion and pickles.

I was pleasantly surprised with how this turned out, since it was all on a whim.  My 22 y/o son was just sad there wasn’t another one available.

LMAO! My Chris and I are sitting here drooling over that! Seriously, I’m not a McRib fan either, but you did a fantastic job on the recreation part. I love it!

This is great Chris! I know my boys would be looking for seconds too! I would order your Mc-Not-a-Rib any day!

I’ve never tried a McRib, McDonalds just really kind of scares me. I have heard one person say the McRib is good but that came from someone who doesn’t cook – ever ::shivers::

Looks good Chris – I think “The McNibble” has a nice ring to it.

What a fun idea! That sandwich looks delicious and I wish I could get THAT one thru a drive thru 🙂