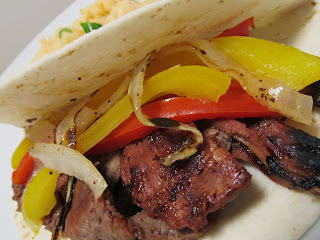 I had a friend in college that met her husband in a fajita line.  Silly as it may sound, it’s true.  We went to this “Around the World” party at one of the fraternities and they had this fajita line.  That’s right…a line that forms and when you reached the end (or the beginning, however you want to look at it) you were handed a fairly well prepared fajita and a shot of tequila.  While my friend stood in line, patiently awaiting her turn to receive her fajitas (and shots), the guy standing behind her asked if she knew what time it was.  That was it.  Seriously, they started talking, found out that they were both psych majors…next thing I know it’s a year later and I’m at their wedding reception talking to them about …go on, you know I’m gonna say it…FAJITAS!!

Ok, ok…so that might not have been the greatest story ever told, but it felt like the appropriate time to tell it since we’re talking fajitas today!  I love fajitas, and used to make them all the time…isn’t it funny how you can have a favorite dish that you make over and over and over and than one day something else takes it place and that one goes away for awhile and than one day you’re thinking about something simple and fast to throw together after a long day at work and all of a sudden it hits you:  FAJITAS!!  I LOVE it when that happens!
So the other day, it hit me… why not throw together some simple, yet flavorful fajitas…a perfect post for Fire Day Friday!!  I’m sure everyone has a good fajita recipe, and there is nothing unusually different about this one, but it’s simple, it’s delicious, and it’s a perfect meal to throw together during crazy week nights!  You could use chicken in place of the steak…though I would marinate the chicken in something like lime and tequila…but that can be totally up to you!

Directions:
In a small bowl, mix together the beer, honey chipotle sauce, Worcestershire, garlic, salt, and pepper.  Place the steak in a resealable plastic bag and pour the marinade over it.  Let the meat marinate for 4-6 hours in the refrigerator.

Preheat grill to 400 degrees.  Place the steak directly over the fire and grill for 4-5 minutes per side.  Remove from grill and allow to rest for 5 minutes, then slice into thin strips.

While the steak is resting, put the peppers and onion on the grill for 5 minutes or just until the veggies start to soften.  Remove from grill and slice into thin strips.  Place thin stips of beef and veggies on the flour tortillas; top with salsa, guacamole, or sour cream if desired.  Enjoy! 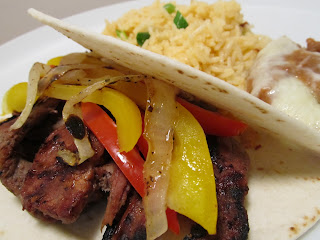 Great story! Nice idea too…a fajita line! (and shots) hehe! I have yet to make fajitas, and we use skirt steak all the time! This will get me going, I’m trying yours. It must me the story attatched! ;D

Love the story and who doesn’t love fajitas – always a hit at my house and hubby will love your beer infused recipe!

What is not to love about fajitas? They are colorful, fun, and flavorful!

Flank is my preferred protein for fajitas and then chicken but after the lunch I had today, I’m going to try some pork.

Love the story, very cute!
Your fajitas look delicious – wish a had a couple of those for breakfast this morning! YUM!

people meet and come together in when they least expect to-
Fajitas are a wonderful meal to enjoy anytime. Simple, flavorful and just plain delicious.

Have a great weekend.
Velva

aww.. what a story. I love fajitas too. Gotta make them soon. yum!

Awesome story about your friends, how sweet 🙂 I love fajitas! I’m gonna have to add them to my menu again soon, always a hit & so easy 🙂