I thought about this recipe all day long and knew what I wanted to do.  It ended up being good in concept but definitely I have to chalk this up as a fail for one reason.  The one component that I wanted to showcase – the tamale cake – was lackluster.  It wasn’t bad but it wasn’t great either.   But the idea and flavors worked perfectly so I’ll try again and just tweek the cake recipe.

The idea was simple. A spicy cheese sauce, a sweet corn tamale cake, pulled pork, and a sweet bbq sauce. 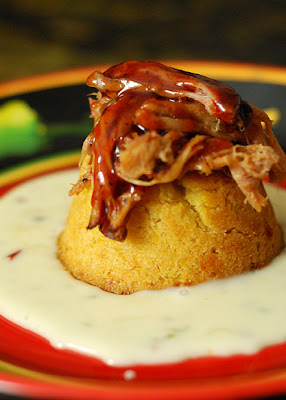 I used the corn tamale cake from this recipe, which made 4 cakes.  I tried cooking on on the griddle, but it didn’t hold its shape.  It spread out like a pancake.   This pic is obviously “pre-pancake mode”. 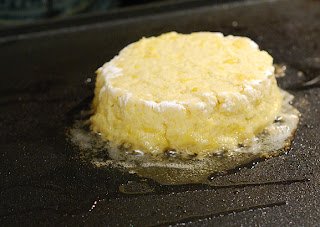 I tried cooking the other three in the oven but they did the same thing. 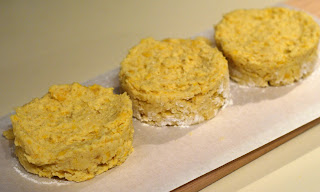 Finally I made another batch and this time upped the masa harina flour amount as follows. 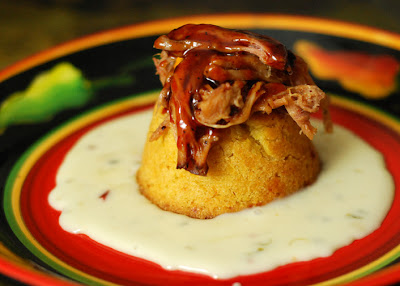 I think the consistency and flavor of the cake is good now that I added flour but cooking them in the muffin tin made the texture too much like plain cornbread.  Next time I’ll try the oven with free standing cakes again.

The spicy cheese sauce contrasting with the other sweet flavors was tasty.   This was a great use for leftover pulled pork!

The picture sure does look good, and actually the cornbread texture doesn’t sound too bad! Of course if it’s not what you were going for, then you won’t be happy with it. You might just have to wrap it in corn husks and steam it! 😀

I guess they can’t all be hits, huh, Chris? Well, it still looks really really good. I LOVE the cheese sauce….mmmmmmm, I could put that on just about anything!!!

The combination of ingredients sounds really good and I am sure it tastes great.
Rita

Everything looks and sounds wonderful Chris but I do know what you mean about the wrong texture – it’s like comparing tamales with cornbread when you were hoping for something in between. It can make all the difference in this kind of recipe. It looks delicious and I’m sure it was wonderful even if not exactly as planned.
TGIF! 🙂

Looks and sounds really good. What about using metal egg rounds that you have sprayed with PURE?

You are a serious cooking student and while the dish may not have blown you away, it looks great.