Print
A few years ago Scott asked for stuffed green peppers and after researching some recipes I just combined 2 or 3 and came up with my own.
Stuffed Green Bell Peppers
1-1 1/2lbs 93/7 ground beef
Enough green peppers for everyone to have at least 1 serving (more if you want)
1 jar of spaghetti sauce
1 box Zatarain’s Dirty Rice mixture
1 package of shredded cheese (doesn’t matter what kind)
Directions:  Brown ground beef in a large skillet. Preheat oven to 350 degrees. After browned, drain the meat and return to pan. Make the Dirty Rice according to the box’s directions in the same skillet with the meat. Meanwhile, cut off the tops of the green peppers and pull out the inside and seeds. Layer rice mixture, cheese and spaghetti sauce in the peppers. Bake for 40-45 minutes until the peppers start to brown a bit.
Modifications:
-I like to use spaghetti sauce instead of tomato sauce because spaghetti sauce has all of the extra herbs added to it.
-Today I used mozzarella cheese that I had left over but a lot of times I will just use whatever shredded cheese that I have in the fridge, i.e. Colby Jack, Cheddar, etc.
-A lot of people will season white rice or long grain brown rice with whatever seasoning that they like but I really love the flavor of the dirty rice so I always use this.
Here’s what you’ll need: 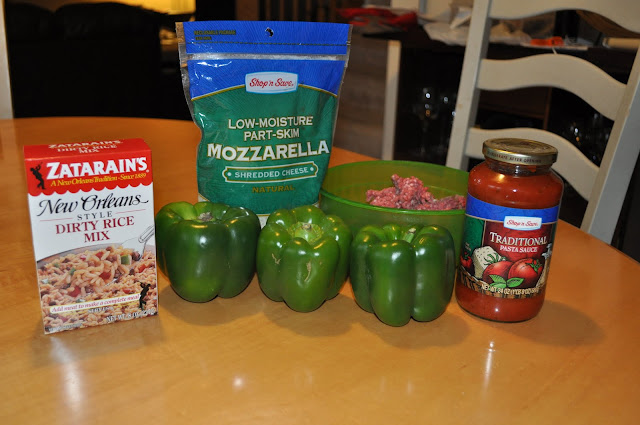 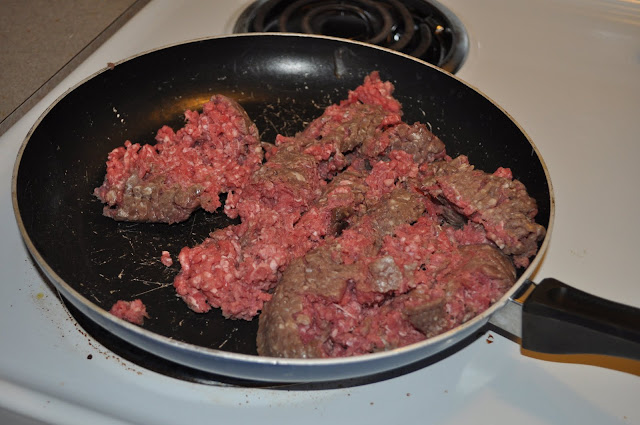 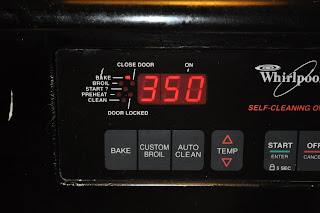 While the beef is browning, cut off the tops of the green peppers and take out the inside and the seeds. 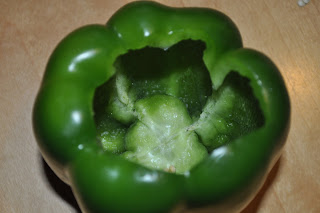 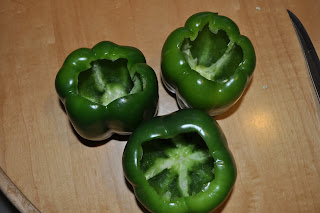 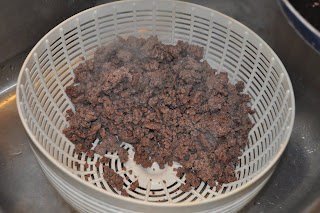 Following the directions on the Zatarain’s Dirty Rice box, add 2 1/2 cups of water to the ground beef. 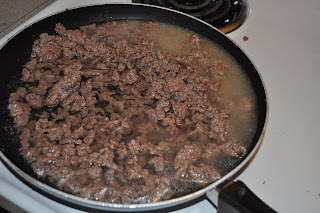 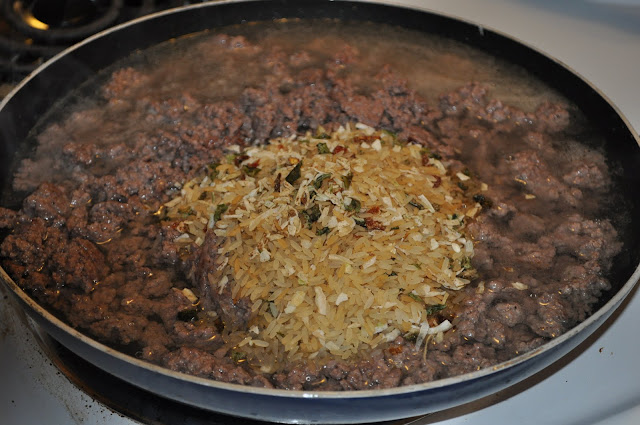 Let it start to boil. 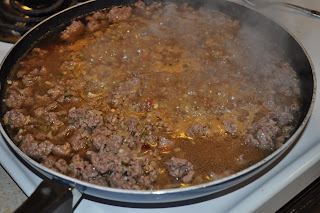 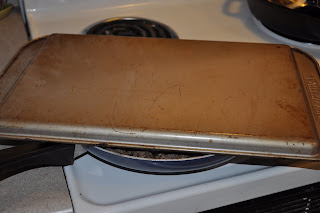 Put a little cheese in the bottom of the green peppers. 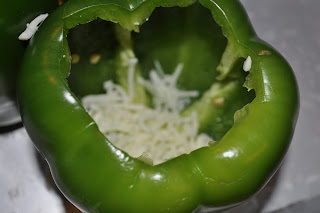 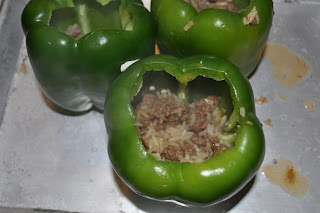 Put in some spaghetti sauce. 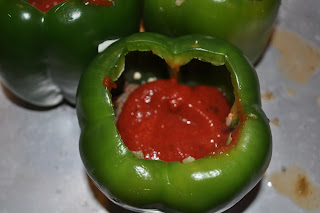 Put some more rice in it. 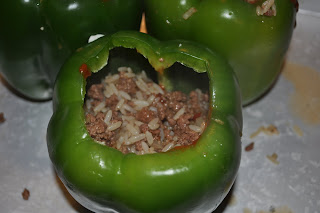 Put in some cheese. 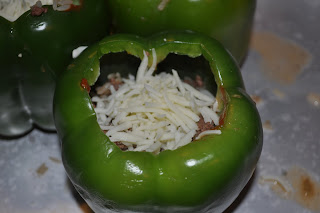 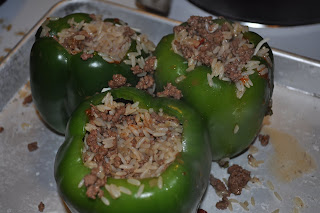 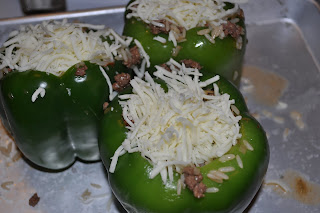 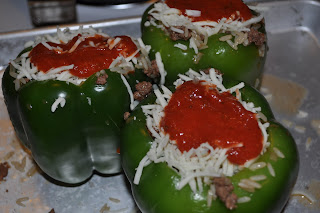 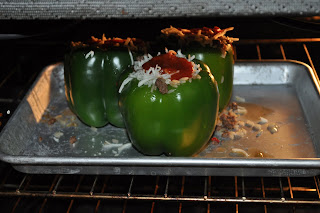 Once brown, pull them out. 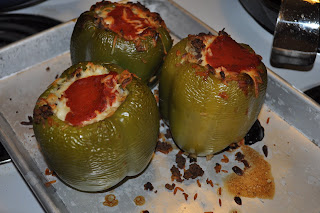 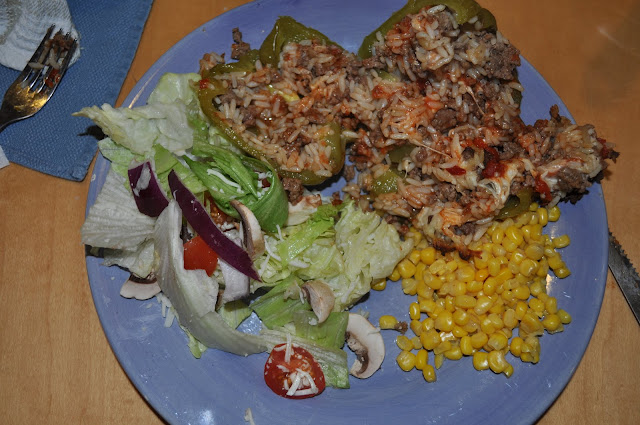 I actually did it a little different this time. Every time before I always boiled the peppers and then pulled them out, drained them and stuffed them. This time, though, I just placed all of the rice, cheese and sauce mixture in the raw green pepper and then baked it for 40-45 minutes. Before I never really ate the pepper because it was always kind of soggy but by baking it, the pepper still had that crunchy texture that makes green peppers so good!

I’ve always cooked the pepper before, too, but I love the idea of just stuffing them, then cooking them. Your recipe looks delicious!

April those are awesome looking peppers – love the layering!

Stuffed bell peppers have always been a favorite of mine, even as a kid.

Never thought to use dirty rice or spaghetti sauce but its a great idea! I’ll have to give this a shot, the hubby has been asking for stuffed peppers, too 🙂 Thanks!