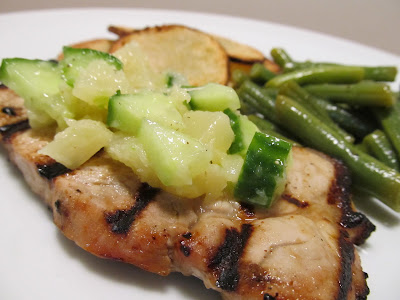 When I was in college (in Nebraska), we used to frequent this little place called Cliff’s Lounge.  Cliff’s Lounge was known for it’s Kamikazes.  Fifty (yep..5-0) different flavored Kamikazes to be exact!  It was a college students little heaven, trust me!  And we aren’t talking shots…we are talking large (did I mention LARGE) glasses of the devils’ own liquid!  My top 3 picks from that list of 50 were:  Purple Hooter, Troutwater (don’t judge), and Pineapple.  I have a vague memory of consuming all three one night… but we’ll skip over those stories as my mom might be reading this!!
So, I guess you are probably asking yourself why I’m telling you this, right?  Well, it seems that every time I eat or drink something pineapple, I am reminded of the Pineapple Kamikazes at Cliff’s.  Don’t ask me why, it’s been years since I’ve been to Cliff’s, but there was just something about those tasty drinks and the green tissue paper balls hanging from the ceiling that I will never, ever forget.  Plus, this is a little plug for Cliff’s – if you are ever in Lincoln, Nebraska, I highly recommend stopping by for a drink or two (or three).  The atmosphere alone is worth checking out!!
ANYWAY…on to what we are really here for:  If you have followed by blog at all, or have read at least one of my posts here since the beginning of the year, than you will probably know that I have a thing for sauces.  When I say sauces, I do have to include salsas and relishes to that mix…as I see it, salsas and relishes are just chunky forms of sauce anyway 🙂 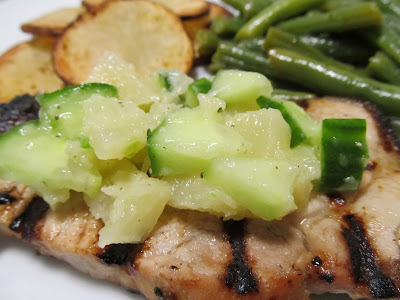 My only problem with this meal was that I could not find thick cut pork chops.  UGH!!  It’s getting harder and harder for me to find anything but paper thin cuts.  What I hate the most is that the cook time has to be very hot and very fast so that it doesn’t dry out.  If you find thicker chops, grab them…just remember to keep them on the grill longer.  Other than that, this meal was perfect.  The flavors melded perfectly together… but I believe one of the best flavor combos out there are pineapple and pork!

Rub the pork chops on both side with olive oil.  Season with garlic salt, pepper, and cayenne.  Allow to sit in the refrigerator for at least 1 hour.  If using thin chops, leave them in the fridge until you are just ready to throw them on the grill…the colder your thin chops are, the better.
In a food processor, puree 1/2 a cup of the pineapple along with the lime juice, peanut butter, and fish sauce.  In a bowl, add the cucumber, jalapeno, and remaining pineapple.  Pour the puree over and toss to combine.  Season with salt and pepper.

Preheat your grill to 425 degrees.  Grill, covered, for 3 minutes, flip and grill another 2-3 minutes.  Remove pork from the grill, serve with relish.  Enjoy! 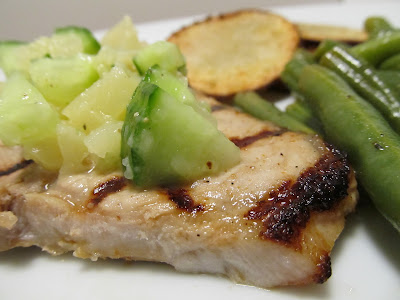 I could never make this for Alexis because cucumbers make her burp and I’m not talking once or twice. But I really like the sound of it. Maybe I can make it the next time she goes to Florida:)

Pineapple and pork are a match made in heaven! Add the delicious flavor of a grill and well, this is a feast to behold I’m sure! Love the cukes in the salsa, this one is a MUST MAKE!! And next time I’m in Lincoln visiting the hubbys family I WILL go to Cliffs. It’d be a nice distraction for me LOL 🙂

50 Kamikazes to choose from? awesome! These days I always stick to sambuca shots. love them!
The pork chops look superb and so beautiful with the cool, refreshing relish.

Lovely relish.
That is a tasty side dish that can be enjoyed by all.
Have a great weekend ♥