This is Alexis from NibbleMeThis. I’m posting for Fire Day Friday this week because Chris is tied up moving one of his out of town offices this week.

Ya’ll probably know I got my own Big Green Egg a while back and this is one of my favorite rolls I have made on it. I used this recipe for Honey Wheat Sunflower Bread but only made one loaf and it is a wonderful bread recipe. 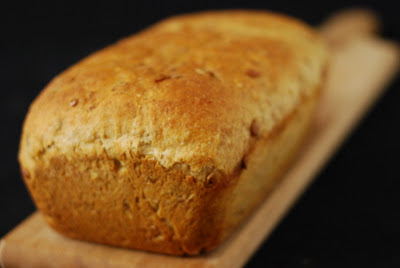 But I used the other half of the dough to make dinner rolls. I knew I was going to love it but was surprised how much Chris and the boys liked it because they are “white bread” kind of dudes. The rolls had a bit of sweet to them and the sunflower seed kernels added a nice texture.

Oh yeah, this was funny. One of our older son’s friends was eating one when I mentioned they had sunflower seeds and he about choked, asking, “Am I supposed to be spitting the shells out?” because he thought the sunflower seeds were in the shells. 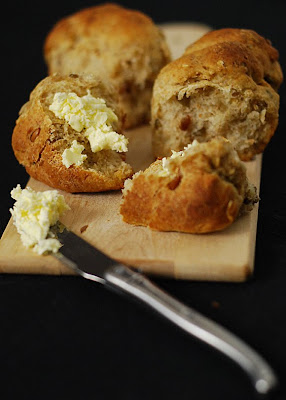 I use a Thermapen instant read thermometer to make sure my water is the right temp.

Mix the warm water, 2 cups of the bread flour (not the whole 2 3/4 cups), yeast and sugar in your mixer bowl. Beat for 3 minutes on low (Speed 2 on my Kitchenaide).

Cover with a tea towel and let it rise until it has doubled. The recipe said 30 minutes but mine took more like an hour.

Stir in the sunflower kernels and as much of the remaining bread flour to get a good consistency. I ended up only using maybe 1/2 cup.

Put on the dough hook and kneaded it until it all held together and pulled cleanly from the sides of the bowl, about 6-8 minutes.

Take out of the mixing bowl and put it into another greased bowl then turn once. Cover and let rise until doubled, about another 30-45 minutes.

Punch down and divide into two.

I shaped one half for the bread loaf plan. The other half I made into equal golf ball sized balls. I put them in a greased, stone ware pie pan and let it rise until doubled again (about 30 minutes).

When that is happening, I started my Big Green Egg and set it up for baking at 375f but you could do it in your oven.

Place in your oven or Egg and cook for 20 minutes uncovered. Then cover it with foil and go another 15 minutes until a cake tester comes out clean.

Brush with a 50/50 mix of Agave nectar and melted butter.

Remove from the grill/oven and cool on a rack.

This one is tasty and would be a great way to serve something different than the same old dinner roll this Thanksgiving.

So lucky to have found this; I have been looking for a good dinner roll recipe.will look for Agave nectar

Alexis – I’m so impressed with the idea of making bread in the Egg. It sounds like it would be really fun and rewarding.

This bread looks really hearty and delicious with the sunflower seeds (and I love the story of your son’s friend).

So glad to see you do a guest post! I hope you do some more 🙂

I read an article just yesterday about the benefits of sunflower seeds, which I happen to LOVE. This sounds like a great recipe! One of my favorite bread recipes is Honey Wheat Bread, so this takes it a step farther. Yum!

Alexis, these are great dinner rolls. I love the sunflower seeds in the rolls. Delicious!!!!

I have a white bread dude family too. No odubt, they would enjoy these warm dinner rolls.

I’m with Jenn Alexis, you should guest host more often, these rolls are awesome! LOL Love the spitting out the shells question too!

That looks delicious! Thanks for sharing!!

Wow, you are a great pinch hitter, Alexis! You should do a weekly post on Nibble Me This! This bread recipe sounds delicious. I love the idea that a kid would think you’d dump whole seeds into a recipe.

Those are beautiful Alexis! I love the story about your son’s friend! Too funny! Thanks for sharing! Tell Chris to let you guest post more often!

Lovely rolls Alexis. I can’t believe you made these in your Egg. I had no idea it was so versatile.
Sam