As you know I LOVE antique recipes! I am ALWAYS on the prowl for antique recipe boxes IF they are FULL of actual recipes, well, and occasionally if they aren’t 😀

On our anniversary amid the pandemic we HAD to get out for a bit and went for lunch and decided antiquing was a safe excursion.  We had a GREAT time at the few places that were actually open.  But, it was in the last store that hubby surprised me with the greatest gift, an antique notebook from 1914 ish.  The recipes themselves aren’t dated, but ARE written in pen and ink that was blotted. There was an article in the back of the notebook from Essex, England April 21, 1915 on “An American Woman”.  Upon further inspection, she saved it for the “When Tomatoes Are Plentiful” recipes on the back side.

Each recipe has its own unique qualities, but one of the best things is that they are attributed to their original author, whether its “Mother” or “Marys Cook” or Bess Maxwell…

The first thing I did was CAREFULLY open the notebook and photocopy each page.  I then put it back together with carefully placed rubber bands to help keep it square. Since these are over 100 years old, I wanted to handle them as little as possible. Fortunately, pen and ink photos quite well and I now have really good working copies to operate from.

I did a little research on the notebook itself, “The National Notebook for use in the National Notebook System adapted for ALL Written Schoolwork”. The patent dates back to 1898, a time when people were transitioning from slates to paper which had become inexpensive and allowed students to retain their notes.

I’m still trying to make out some of the formal cursive writing and a few of the titles, but the ingredients sound really good and are seriously FROM SCRATCH.

The first recipe I tried in its ORIGINAL form is from Ernest Arbogast, the chef at the Palace Hotel in San Francisco, but made famous by Chef Louis Paquet is Chicken Tetrazzini.  It is said that he named the recipe after Italian opera star Luisa Tetrazzini.  It is widely believed to have been invented around 1908–1910. So, I’m sure the recipe was making the rounds through all the housewives 😀

The version I was taught when I was younger was seriously altered and shortcutted with processed foods so this is a really FANTASTIC find! 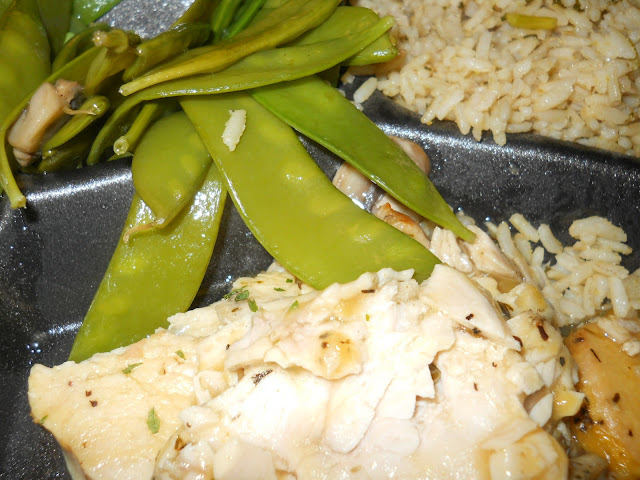 Seriously, this was some of the best hospital food I ever ate.  Orange Basil Roasted Turkey, Cilantro Rice and Sauteed snow peas and mushrooms!

Whenever I go antiquing or through a thrift store, I’m on the lookout for old recipe boxes.  Not just any old recipe box, but old recipe boxes full of old recipes.  Well, I hit the jackpot today!  I found this box stuffed full and it only cost me a quarter! 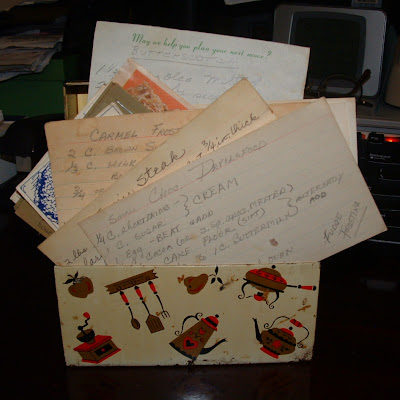 The recipes I love to find are the ones from WWII or before – you know the kind that called for 5 cents of hamburger, were all hand written and made from scratch. It’s really fun to find them chicken scratched onto old note pad pad that has an address so it gives you an idea where they originated.

While today’s appear old, they are probably more from the 50’s.  Some recipes that I will try soon are Swiss Steak, Forgotten Cookies, Jambalaya, Cherry Pie filling, Peanut Blossoms and Cherry Crunch Desserts.