Print
Part of this update post is copied from my original post, Oh No More Mold which required destruction of the upstairs bathroom also. I’m happy to say that it is almost all handled now. I’m including the original pictures as well as the updates so you can easily see the progress. The new plumbing has been done (but not without casualties) by hubby and buddies and we will actually be able to use the bathroom again (don’t panic, we’ve been trudging downstairs in the interim – a real pain in the butt in the middle of the night). 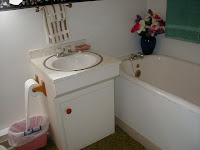 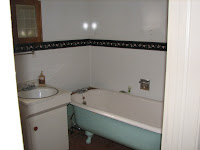 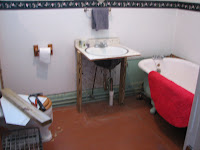 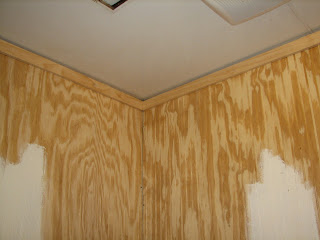 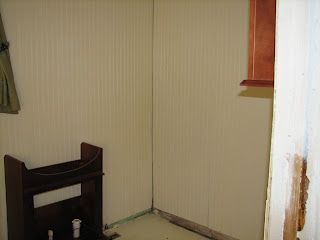 So we’ve had a productive and disappointing time of it. I tried to show the pictures in order so you can see the changes throughout.

We needed to expose the old plumbing that the previous owners had built this funky facade around it (out of old masonite board) so we could get the plumber in for an estimate to convert this fantastic old 6 foot claw foot tub into a shower and tub combo. We’ve also had to change out the old vanity sink due to more mold so we chose an old fashioned sink that looks a little more like it belongs and camouflages the new plumbing. We were able to put the new plumbing under the floor (where it belongs). As you can see, they had built a really funky facade around the tub too. I can’t figure out why either ~ it’s in near perfect condition. I painted the tub with Rustoleum Copper colored hammer paint as well as the drain vent pipe that has to stay. I don’t have the parts yet, but will also paint the shower enclosure bars the same color. I had 2 choices for the shower enclosure, either get the FUNKY too small conversion kit at Home Depot for $65 or spend $500 for the one from the restoration company so I chose option #3 – build my own for about the price of the FUNKY one. So the drawings are done and I’ll get the parts so look for that completion picture in the future. Okay, scratch that, we’ve decided to eliminate the old fashioned tub and opt for a more efficient and conventional shower that will also allow room for a linen closet and better storage. Anyone want to buy a turn of the century claw foot tub in excellent condition? 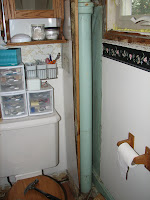 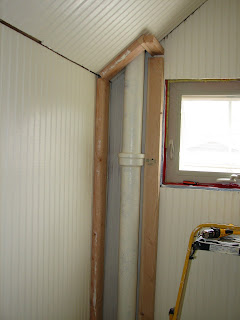 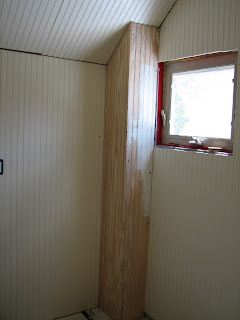 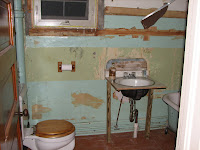 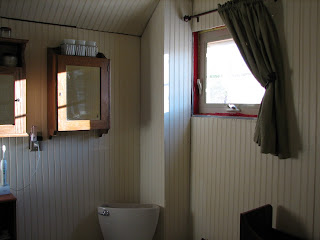 They also painted the wood floor a funky rust color and then had a cheap carpet remnant on top of that. We weren’t going to do anything but paint the floor for now, but found some serious molded rotted wood as we began the plumbing. We looked at doing ceramic tile and then actually settled on a Laura Ashley ‘exotic’ (their word for the thicker solid pieces) floating plank floor for 2 reasons. 1) The Laura Ashley floor is self contained, and 2) the backing foam is already mounted to the back of each board, it was on sale, it was about $1.25 less a square foot than doing the tile. 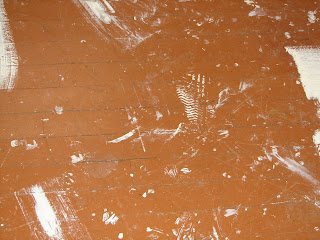 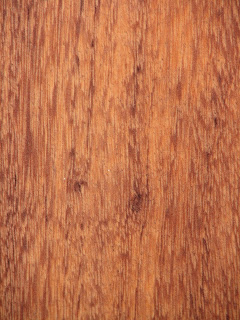 Productive in that we got to this point, disappointing that we found more mold all along the way so there was more old lathe and plaster to be torn down, and exciting that we can begin to visualize this room done. I tried to bleach it and use KILZ first on the mold, but it always seems to work the hard way and we had to tear out most of the back and one side wall. So after getting to the tear down point that we were comfortable with no more mold, we added 3/4 inch foam insulation board and then white washed bead board on top of that to create the turn of the century feel we were looking for to go with the claw foot tub. We’re building a new and better enclosure around the vent pipe.

We’ve also done the ceiling like an old tin ceiling. We priced the real stuff and the plastic replica and then decided on the fiberboard by Armstrong that now painted looks like it was original to the house. I sealed each seam with caulking, painted with BEHR kitchen and bath paint and then did a clear coat sprayed sealer (It is a bathroom and we wanted to protect against steam). We also added a powerful exhaust fan. 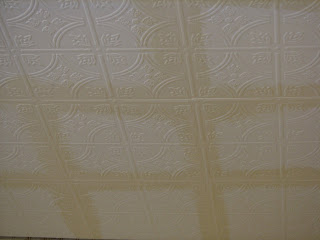 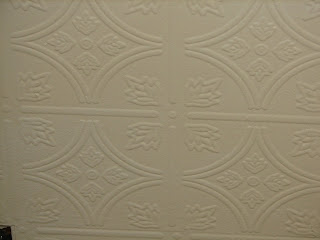 So all we need to do is finish the floor, shower, a decorative shower curtain and about a million trim boards and we’ll be all done., But at least we’ll have a sink and toilet upstairs at the end of the day which means the light will soon be turned on in the
tunnel.

Love the beadboard and the ceiling! Can’t wait to see it all completed.