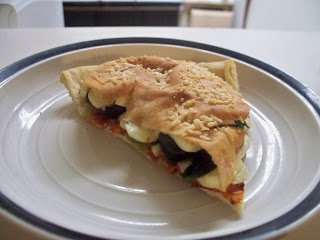 There’s a place that sells Italian food on my college campus. It’s not what you’d call authentic or even all that great, but there’s nowhere else to get a slice of pizza if you don’t want to order out. The best thing they have is this great stuffed pizza, two crispy crusts filled with cheeses and veggies. Unfortunately, one slice costs almost $5! I decided there had to be a better way, and I was right.

It turns out that a pita, sliced and baked in just the right way, tastes as great as the crust of this overpriced stuffed pizza. For this recipe, which makes one slice of stuffed pizza, you will need one piece of pita bread, two or three tablespoons of tomato or pizza sauce, around 1/4 cup of mozzarella cheese, and any other pizza toppings.

First, slice the bread so it’s the shape of a big pizza slice, with the crust end closed and the sides open: 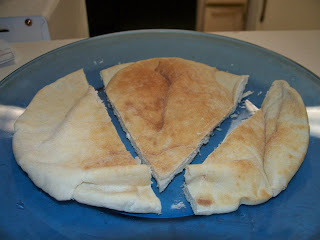 You can stuff the leftover edges too, or slice them up and bake them along with the rest to make pita chips.

Heat the pita in the microwave for ten seconds. This will make it easier to open without letting it get crispy too early. Slide a spoon between the two halves at the tip and the pits should open.

Then, put in the fillings in any way you’d like. I used a little plain tomato sauce, slices of mozzarella rather than the shredded kind, spinach, and olives. Put your slice on a baking sheet or a piece of aluminum foil and sprinkle the top with parmesan if you have it. Bake at 250 degrees for about five minutes, or until the cheese all melts but before the pita gets too brown.

Although I expected this recipe to be an imitation that just wouldn’t quite hit the spot, it tasted so much like those big slices that I don’t think I’ll ever waste the money on one again!

—> Health-friendly Tips
-Use a whole grain pita instead of plain white.
-Sprinkle sesame seeds on top instead of extra cheese.

—> Kid-friendly Tips
-If your kids don’t like veggie toppings, sneak finely chopped or pureed veggies into the sauce.
-Don’t tell them they’re having pizza for a snack. Although this recipe is completely picky-eater approved, it is probably very different from their image of a delivery pizza with a thick crust and the cheese on top.

—> Budget-friendly Tips
-Instead of cooking up a separate side dish, serve with more of the veggies you used to stuff the slice and a tasty dipping sauce.
-Want to use extra meats or cheeses but don’t want to pay for a large amount? If you ask for just one slice of anything at your grocery store deli, you’ll probably get it for free.

As a little bonus to today’s post – remember when I suggested last week that you can make the jello recipe inside a watermelon half? Well, I picked up a fresh watermelon at a roadside stand this week, and my kitten is sure enthusiastic about the idea! 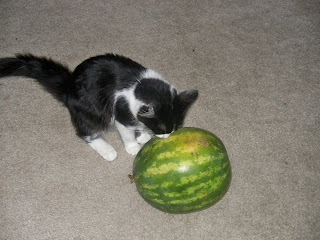 I love a great pizza – looks good. And the kitty is so cute!

By the way, your kitty is so cute! I have one that looks almost the same!