Anyone paying attention? Way back on December 28th, I made an innocent comment that I just don’t prefer Brussels Sprouts. I didn’t attack, I didn’t toss a bowl of them across the room, I just said I didn’t prefer them… Go ahead and click HERE to read that old post. Be sure to check the comments to see how polite I was in my revulsion.

Well, cooks I respect assured me that if I were to try their recipes, I would love the little suckers. One or two, I considered, but the recipes just would not stop, and to be honest, after reading the first half dozen, I was finished with the idea of blindly trying some one’s recipe. If you all would have made the dish, delivered to my house, I would have tried every one. But the idea that I was going to cook up a bunch of recipes was just out of the question. 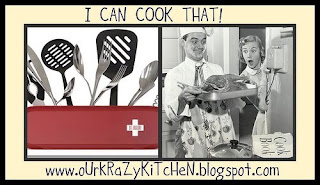 Oh, BTW, hi again, Dave here from MY YEAR ON THE GRILL. The resident cook in training, famous for three puffed pastry postings in a row. 3 puffed pastry and now Brussels Sprouts… Not sure if this is what the ladies had in mind when they offered a griller a weekly posting, but it’s too late now, I have the password to get into the site. Bwahahahaha!

OK, I sort of made a commitment to give the little buggers at least a try. So I bought a couple dozen fresh ones. I was pretty sure I was not about to like the frozen ones, so fresh or nothing was my attitude. I started my research. remember, I don’t know nothin‘ ’bout nothin‘, so I usually spend an hour or so doing research about a dish.

I discovered something very interesting… Brussels Sprouts have an unfriendly cellular compound that when cooked, releases a combination of mustard oil and sulfur… thus the rotten egg smell that my mother was famous for. The longer you cook them, the stinkier they get. Also, the nastier they taste. If you cook them as quickly as possible in as little water as possible, the nutrients remain, without releasing the nasties that sprouts are famous for.

If ANY recipe calls for sprouts to be cooked longer than 10 minutes, you are releasing those nasties, and I just don’t want anything to do with your recipe. You may like it, and that’s fine. It’s America and you get to like what you like. Please respect my desire to NOT like em… But I did try… here’s what I did to check the theory… 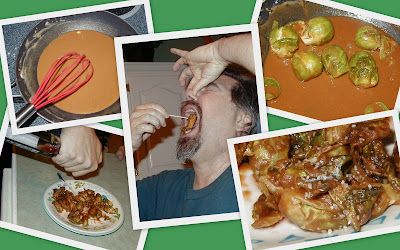 Yeap, I ate em. First, I made a simple roux of equal parts butter and flour. I cooked the roux (stirring constantly) until I got that nice nutty aroma. I popped in a few sprouts and started cooking. After about 5 minutes, they were still crispy, just starting to turn color. I ate one. Not great, but certainly not what I remembered from my mother’s kitchen. I cooked for another 5 minutes, and they were getting a little bit mushy, but not too bad. I ate another. It did have a little bit more nasty taste that I remembered, but again, not too bad. I took out all but one of the buggers. that one, I cooked for 10 more minutes… This time, I had very unpleasant flash backs to my sainted mothers nasty smelling kitchen. Sure enough, the research panned out. Longer you cook them, nastier they taste. Now, the bottom two photos in the collage is what I did with the ones that I just cooked for 10 minutes. I added a bit of flavored balsamic vinegar, and some sea salt. Honestly… Not too bad. I would eat these again. It will never be my favorite, but actually, they were …OK. And OK is a big improvement.

Alright, I now have a basic understanding of what I don’t like about sprouts, which is that funk from over cooking. But I am still really not a fan of the taste even when “properly” (to my tastes) cooked. So, time to come up with a recipe that hides the taste. I saw lots of you experienced cooks and your recipes sounded fair. But they seemed to cook the sprouts too long, and non of them were shouting to me…

Here’s what us knuckle dragging hairy Neanderthals do when placed in a situation of wanting to improve the taste of a food items… Wrap it in meat (more than one kind if possible), add some spices and grill em! 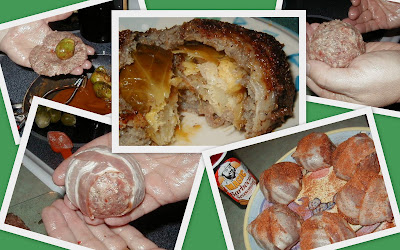 I coated ’em with the hot roux (which by this time, it was really dark and aromatic). I only rolled them around for less than 2 minutes, just to get them coated in the moisture. then, I wrapped em in a thin layer of sausage. Just the standard Jimmy Dean stuff, nothing flavored. I then wrapped em in bacon and sprinkled some BBQ seasoning over the whole thing.

You could bake them or fry them on the stove top, but I chose to grill em. It only took about 15 minutes, turning to get all sides cooked. this does contradict my “no sprout should be cooked longer than 10 minutes” rule, but I was assuming it took at least half the time to get the heat to where the sprout was through the layer of meat.

And the verdict… These were actually good… Very good! Still crispy on the inside and tender on the outside. The added pork fat that actually did the cooking seasoned and flavored the sprouts. Because the balls were so small, in every bite of sprout, there was some sausage, some bacon and some BBQ seasoning. I would make these again, and I would eat them again. TA TA TA TAAAAA – I like Brussels Sprouts! 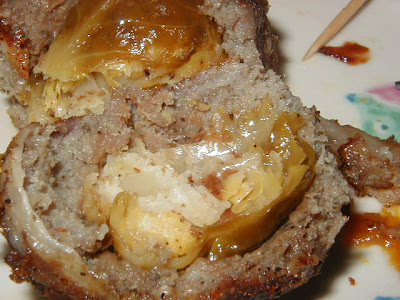 But, finding a recipe that I liked was not good enough. When you get down to it, it is a vegetable wrapped in fat, wrapped in more fat and then seasoned well… What’s not to like! Let’s see if I can make something without meat that I would like…

Back to my research, I found something else interesting. Brussels Sprouts are a member of the cabbage family. I assumed that just from looking at em. But they have all the properties of cabbage, among which… they can be eaten raw. They do taste a little more bitter than “regular” cabbage, but they can be used in any cabbage recipe. Just should add a little more softener to the recipe. What is the iconic cabbage recipe… Cole Slaw. 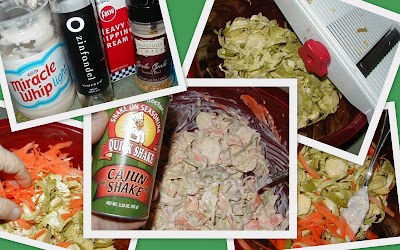 OK, I used a mandolin to cut the sprouts. Yes, one at a time, and it was time consuming. BUT, it also gave me a unique look. The sprouts shredded around the edges like “normal” cabbage, but the center stayed intact, so I got a nickle sized disc from each slice on the Mandolin. I added a couple tablespoons of Miracle Whip Light, a tablespoon of flavored vinegar, a tablespoon of heavy cream and some garlic seasoning. I also added some shredded carrots. And finally added a generous amount of Cajun spice to taste.

This tasted just a bit more bitter than a “normal” cole slaw, but in NO way would you suspect that these were Brussels Sprouts (unless you associated the discs as sprouts… unlikely). I suspect that if you add a bit more heavy cream to soften the bitterness, there would be no real difference.

I LIKED THIS AS WELL!

So, in the spirit of I CAN COOK THAT… I have come up with two recipes for Brussels Sprouts that even a died in the wool, unshakable sprout hater would like (if they approached with an open mind). 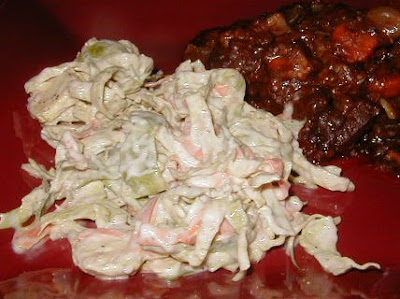 I plated these with some leftover Julia Child Boeuf Bourguignon… But that’s a tale for my “REAL” site.

As always, if you like my writing style, come take a look at my “REAL” site, MY YEAR ON THE GRILL, which you can see by clicking HERE. Julia would want you to…

I like D’s recipe. Dave, I think you should try it. We want to expand your brussels sprouts menu.

What about salmon and brussels sprouts?

I enjoy reading both here and your blog. You know how to make it interesting to learn about cooking.

I understand your dislike of brussels sprouts, but I am a fan of them for long cooking. It’s medium cooking that’s the issue, at least for me. They do release those nasty compounds and taste icky for a bit, but if you keep on cooking them, that goes away again.

My favorite recipe: halve (or quarter if they are very large) some brussels sprouts, brown quickly in a pan with butter (or olive oil if you prefer, but big dairy is still on the way). Add a little salt and pepper, transfer to oven proof dish with tight lid (or that can be sealed with foil). Add enough heavy cream to cover sprouts 2/3 up. Cover or seal with foil and put in oven preheated to 350 F. Cook for 40-50 minutes till sprouts are soft and nutty tasting (but no longer mustardy and sulfury, bleh) and cream has thickened to nice sauce. Bad for you. Tasty as heck.

Oh Dave this is classic! I can’t believe you wrapped your brussels sprouts in meat and bacon! I have to say, it does sound good 🙂
So I do see it here in writing, Dave likes brussels sprouts! I knew you wouldn’t hate them once you started experimenting with them.
A success story – Whoo-hoo!!

I love brussell sprouts, my niece calls them dancing balls so of course that is what we call them now.

Good for you, Dave. I have only had decent brussels sprouts once in my life. The sausage/bacon goodies would probably convince me to try them again.

Thanks for sampling brussels sprouts and even better making some good recipes to try.

I love the idea of the slaw with brussel sprouts.