As many of you know I have spent the last 7 1/2 months helping out various  family members around the country.  First it was my elderly in-laws  who begged us to come help them sell everything including the house and move them closer to family (we all know how that went – FIL is still trying to assign sentimental prices to everything in sight) and now it is my aunt & uncle.  My aunt has end stage Parkinsons disease, such a sad disease.  My aunt is extremely artistic and a beautiful painter – or at least she was.  The Dyskinesia from the Parkinsons disease has robbed her of that ability.

My uncle recently saw the Oprah episode on hoaders and has decided that my aunt is one.  Trust me, she isn’t.  I once worked for a real estate company as a stager for homes and they would send me in to work on homes that were similar to those on the Oprah show – those were horrible.  So ask yourself, what is my (your) happy medium on the stuff I’ve (you’ve) accumulated?  My theory?  If you have a place for each item and it’s in its place, you’re NOT a pack rat or a hoarder.  I do offer you the definitions below.


She does have a LARGE collection of art supplies and empty tins for storing those items in, but in her defense men do think in simpler terms and this is just a meeting of the minds discussion.  And in his defense they should be getting rid of most of this as she is now in a assisted living home and will not be able to use these items again.  Donating them to the church or a school while they are still usable would be best, but can’t be forced.  I pray that I will have more grace regarding these type of decisions if I reach that point and give up things more willingly, but none of us can ever be in one another’s shoes and truly know what we would do.

NOW FOR A LIGHTER TOPIC:JELL-O TRICKS 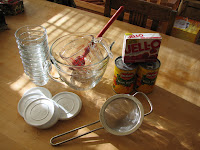 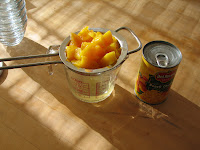 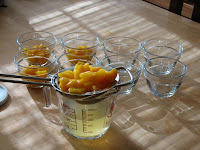 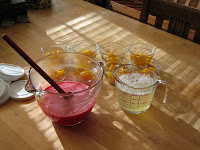 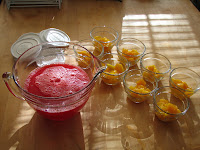 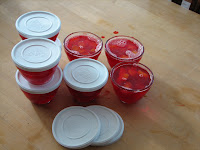 I think most everyone knows this trick by now, but it always amazes me how much better it makes a bowl of Jell-O so I thought it was worth mentioning again.Around our house we usually put canned fruit (peaches or pears usually) in the Jell-O for a little bit of extra OOMPH! When you drain those canned fruits, use a sieve and drain them into the measuring cup for the cold water first. Then just add enough water to bring the level to where you need it. I usually get about 1 1/4 cup of fruit juice. Doing this will make for a better, more substantial flavor to any Jell-O.

Just after I pour in the Jell-o I use a small salad fork to stir up the fruit in each bowl. The fruit is usually well distributed in the Jell-O.

We also don’t like the film that forms on the top. And I hated trying to stack all the bowls in the refrigerator, so I started using my Pampered Chef prep bowls for making Jell-O. Once you’ve made it, put the lids on and you can easily stack them in the frig.

If I keep this made, we both tend to eat this at night when the munchies strike and stay away from the chips and ice cream.