The last several months have been a little stressful for us with all the trips to the hospital, the invasive tests and surgery.  Hubby has been a true prince throughout it ALL!  When I went for the original test before the Big “C” diagnosis, the facility was an hour away and it was a routine test that was going to be followed up by a doctor at a later date so I went by myself.  As with so many things in life, routine turned into something else.  Halfway through the test I was introduced to a new doctor who observed the remainder of the test with a few technical requests to the technician and then he sat me down and proceeded to tell me I had cancer and that my care was being transferred to an oncologist.  I had a mammogram scheduled for an hour later and had to sit and wait for that having heard the worst possible news I could have been given.  I then had to drive an hour home and tell hubby the worst possible news I could.  He took it like a trooper and has been my hero ever since, well even more so than he was before.
Since December 28th I have been a prisoner of my disease.  The best positive advice I have given myself is the I AM NOT MY DISEASE and I will not quit living life.  I still haven’t been released to “normal” life, but as long as someone else drives I can start to get out a bit more.  So, hubby and I are reinstating a ‘date night’ into our life starting with tonight. 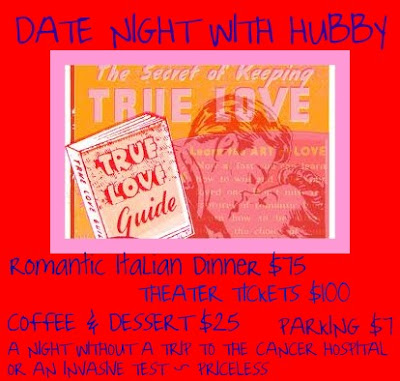 I loved getting out more than I will ever be able to describe.  I just about live in flip flops, Levis and comfy t-shirts, but being able to get dressed up, put on some make up every now and then is awesome. My question is, what has happened to the world while I was away?

We drove to the theater district and parked.  It was almost too easy.  We chose a little romantic Italian restaurant for dinner ~ you know tablecloths and cloth napkins, quiet and subdued lighting type of place where we had a great meal, but sat just across from us was a father and daughter waiting for 3 others in their party.  Daughter was hyper and all over the place, spilling drinks and let’s not forget her flashing roller shoes.  Dad was loudly on his cell phone and ignoring the daughter ~ need I say more?
We then walked to the theater where we sat out front and waited a while, people watching.  I was appalled by the people coming to the theater in ragged clothes that I wouldn’t be seen  in weeding my garden or painting the house.  Does no one take any pride in their appearance anymore?  When the ushers are wearing tuxedos, doesn’t it seem only prudent that you should be wearing something nicer than holey jeans and t-shirts with inappropriate sayings on them?
These are just my observations, but personally I’m sick of casual grunge!  Despite all this date night was a success and has be reinstated in our life to help give up perspective!

I like to live in jeans and tshirts like you too, but I enjoy putting on nice clothes for an evening out. I am glad that you got out of the house with your Prince.

I guess those people need to listen to Oprah more and stop being schlumpadinkas.

So glad you were able to get out with hubby for a date night!

Nothing surprises me with the way people dress or act in public these days. I guess working at a high school has taken away the shock factor for me – seeing kids come to school in their PJs and slippers sometimes toting pillows and blankets. Or worse, wearing shorts and tank tops that are really no more than tiny bikinis, boys with their shorts hanging so low that they are literally around their thighs, and many that look like they haven’t showered in weeks!

I always wonder where are these kids parents? – And then the parents show up – mothers without bras with their boobs hanging to their waists, fathers that show up in undershirts that look like they have been wearing it since the 70’s, mothers who bend over at the water fountain as I shockingly notice they came to the school in nothing but a big t shirt with a freakin thong underneath – I mean come on people!!!

Oops, sorry for the rant here. I guess I better not continue on the cell phone or Ipod subjects! LOL!