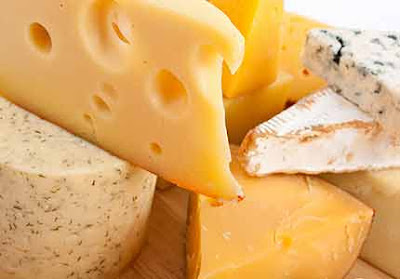 While I’m on a limited diet after surgery, I decided to start some research type tutorials to help me develop some new recipes for when I can rejoin the real world of food.

Today’s research starts with cheese.  Knowing whether a cheese is hard, soft, bacteria or mold grown makes a difference on how to incorporate them into your recipe.
Cheese consists of proteins and fat from milk, usually the milk of cows, buffalo, goats, or sheep. It is produced by coagulation of the milk protein casein (acid). Typically, the milk is acidified and addition of the enzyme rennet (enzyme) causes coagulation. The solids are separated and pressed into final form. Some cheeses have molds on the rind or throughout. Most cheeses melt at cooking temperature.
Their styles, textures and flavors depend on the origin of the milk (including the animal’s diet), whether they have been pasteurized, the butterfat content, the bacteria and mold, the processing, and aging. Herbs, spices, or wood smoke may be used as flavoring agents. The yellow to red color of many cheeses, such as Red Leicester, is formed from adding annatto (slightly nutty, sweet and peppery) giving you yellow, orange and red tints.
For a few cheeses, the milk is curdled by adding acids such as vinegar or lemon juice. Most cheeses are acidified to a lesser degree by bacteria, which turn milk sugars into lactic acid, then the addition of rennet completes the curdling. Vegetarian alternatives to rennet are available.  You’re not likely to find these at your standard grocery store, more likely Whole Foods or Trader Joes.
Cheese is a generic term for a diverse group of milk-based food products. Cheese is produced in wide-ranging flavors, textures, and forms.
A SOFT cheese is un-ripened cheese made by coagulating milk proteins with acid. Examples include cream and cottage cheeses.
HARD cheeses are ripened, or aged, cheeses made by coagulating milk proteins with enzymes (rennet) and culture acids. The cheeses are then ripened by bacteria or mold.
Because aging depletes cheese of moisture, hard cheese is drier and harder than soft cheese. Bacteria can’t grow as readily in dry environments as in moist environments, which is why hard cheeses keep longer than soft cheeses. Pretty much any cheese that is aged long enough becomes firm. During the aging process, the moisture in the cheese evaporates and the salt in the cheese crystallizes, this is what gives Parmesan and other aged cheeses their distinct crunchiness
Normally cheeses are left to rest under controlled conditions. This aging period also called ripening, lasts from a few days to several years. As a cheese ages, microbes and enzymes transform the texture and intensify the flavor. This transformation is largely a result of the breakdown of the casein (acidic) proteins and milkfat.
Differences among hard and soft cheeses is not always clear cut though, especially among semi-hard and semi-soft varieties. Also, some cheeses can be made in softer or firmer grades, depending on how long the cheese is aged and the pressure with which it is packed into molds.
Examples of soft, semi-soft, semi-hard, and hard cheeses are as follows:
For storing cheeses,  wrap the cheese in waxed paper, and if you are planning on keeping it for a length of time, then change the wrapping regularly (weekly).

FOR HARD CHEESE: If you find that mold is growing on the cheese, then just scrape the mold off, and change the wrapping.

Love me some gorgonzola! LOL at least it wasn’t corny too.

I just ate a bunch of moldy cheese this weekend! (Gorgonzola)

Interesting post – glad I have a cheese box to store mine in, lol. At least that’s what I assume that what my funky antique find was for, not really sure – but it sure would have held a few nice big rounds of cheese!