These guys may be a re-post from when I first started my food blog but they are one of my favorite side dishes for grilled steaks. Plus they can be made up ahead of time and then finished on the grill indirect while the steaks rest. 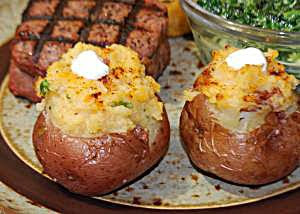 Cut a thin slice from the bottom of each potato to make it flat so the potatoes will be stable. Rub them with oil and then rub with the 1 Tbsp of salt.

Bake them at 350f just until soft to touch, about 45 minutes. Remove and let cool for about 10 minutes.

While the potatoes are cooking, char the pepper over a hot flame until blistered. Place in a ziptop bag for 5 minutes, then peel, seed, and dice it. Use half or more of it for these recipe. 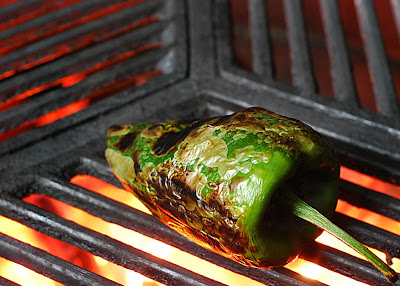 Cut a thin slice from the top of each cooked potato. Use a melon baller or a very small spoon to carefully scoop out most of the insides of each potato to make a little bowl. Keep all of the pulp in a mixing bowl.

Add shredded Cheddar cheese and next 6 ingredients to potato pulp in bowl and mash with a potato masher or just a fork. Mix in the diced pepper.

Stuff some of this mixture into each potato shell.

Garnish with your choice of more sour cream, paprika, cheese, cilantro or just about anything.

I’ve wanted to make potatoes like that -they look incredible!

Delicious Chris!
Twice baked potatoes are my very favorite side to have with steaks. I make mine very similar but have never included the peppers – love that! 🙂

YUM! And so pretty, too! I love the shot of the pepper over the fire, awesome!