I’ve been struggling with a way to get back into the swing of things here in blogland. You see just 2 months ago today I was struck with those words that we all fear hearing from our doctor. You know,  any phrase that includes the words cancer, chemotherapy, radiation or surgery. For me it was the worst Christmas present imaginable so I persevered and didn’t really let on to most of the family in the beginning – no sense ruining anyone else’s holidays since no further testing could be scheduled until after Christmas.
You truly do go through the 5 stages of grief augmented with periods of disbelief and a lack of comprehension.  It doesn’t matter how well schooled you are or how intelligent you are, those words hit you like a ton of bricks.
Last year when I began my food blog, Always Eat On The Good China, I developed the name after reading a letter that Erma Bombeck wrote when she knew she was dying from cancer.  I even put a quote from her on my side bar that I found extremely poignant.
It was around that same time that I had an appendicitis attack – I still had my appendix and it had been chronic since I was 9 years old.  Or at least I thought I was having an appendicitis attack.  We now know that I was having pain from my ovary that was growing into what was being described as a cantalouped size mass.
Fortunately for me at my well woman exam the nurse practitioner noticed what she thought was an enlarged uterus and she ordered an ultrasound because she feared uterine cancer.
The ultrasound was on the Tuesday after Christmas. The words changed, but stayed the same, cancer was still in the phrase, but now it was ovarian cancer.  To it they added terms like tumor and oncologist. 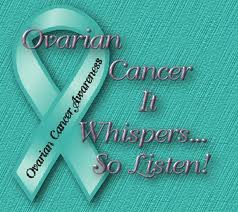 My brand new doctor (I’d never met him prior to the ultrasound tech calling him into the exam) in a brand new town thought I was in shock because I didn’t cry and react hysterically. He just didn’t know  me well enough to know I was really okay.  But, I’m a fixer, so my next phrase is always, what next?  What next turned out to be a referral to MD Anderson Cancer Center and an oncologist, whom I adore by the way!.  She and her team made it possible for me to stay both positive and see the light at the end of the tunnel. Their Motto is “making cancer history” which struck me as the right positive note for me.
The next 2 weeks and 5 days were a whirlwind of blood draws, X-rays, CT scans, MRI’s, chemical stress tests, consultations, clearances and…
I underwent surgery on the 1st knowing full well all the fine print, legal jargon and potential pitfalls of this diagnosis.  I also knew that because of the size, I would awake to only a possible pathology.  I awoke to hear things like “self-contained”, “non-invasive cancer” and “surveillance” as well as that the cantaloupe was actually a volleyball with a balloon twist.  While we are still awaiting final pathology I am now at home after a week in the hospital and catering to the whims of a 10 inch zipper through multiple layers of muscle and the needs to get my energy back and regenerate the tissue.
With that, for now, I’ll leave you with this email story that crossed my desk.  True or not, it’s heart warming and endearing and worth the read.  I choose to believe in the bright and positive.
~~~~~~~~~~~~~~~~~~~~~~~~~~~~~~~~~~~~~~~

Mary and her husband Jim had a dog named ‘Lucky.’

Lucky was a real character. Whenever Mary and Jim had company come for a weekend visit they would warn their friends to not leave their luggage open because Lucky would help himself to whatever struck his fancy. Inevitably, someone would forget and something would come up missing.

Mary or Jim would go to Lucky’s toy box in the basement and there the treasure would be, amid all of Lucky’s other favorite toys Lucky always stashed his finds in his toy box and he was very particular that his toys stay in the box.

It happened that Mary found out she had breast cancer. Something told her she was going to die of this disease….in fact; she was just sure it was fatal.

She scheduled the double mastectomy, fear riding her shoulders. The night before she was to go to the hospital she cuddled with Lucky. A thought struck her…what would happen to Lucky? Although the three-year-old dog liked Jim, he was Mary’s dog through and through. If I die, Lucky will be abandoned, Mary thought. He won’t understand that I didn’t want to leave him! The thought made her sadder than thinking of her own death.

The double mastectomy was harder on Mary than her doctors had anticipated and Mary was hospitalized for over two weeks. Jim took Lucky for his evening walk faithfully, but the little dog just drooped, whining and miserable.

Finally the day came for Mary to leave the hospital. When she arrived home, Mary was so exhausted she couldn’t even make it up the steps to her bedroom. Jim made his wife comfortable on the couch and left her to nap.

Lucky stood watching Mary but he didn’t come to her when she called. It made Mary sad, but sleep soon overcame her and she dozed.

When Mary woke for a second she couldn’t understand what was wrong. She couldn’t move her head and her body  felt heavy and hot. But panic soon gave way to laughter when Mary realized the problem. She was covered, literally blanketed, with every treasure Lucky owned! While she had slept, the sorrowing dog had made trip after trip to the basement bringing his beloved mistress all his favorite things in life. 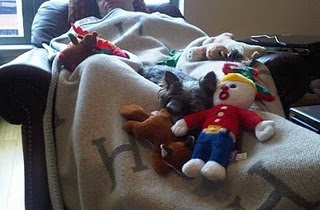 He had covered her with his love.
Mary forgot about dying. Instead she and Lucky began living again, walking further and further together every day. It’s been 12 years now and Mary is still cancer-free.
Lucky… He still steals treasures and stashes them in his toy box but Mary remains his greatest treasure.
Remember….live every day to the fullest. Each minute is a blessing from God. And never forget….the people who make a difference in our lives are not the ones with the most Credentials, the most money, or the most awards. They are the ones that care for us.

If you see someone without a smile today give them one of yours!
Live simply.
Love seriously.
Care deeply.
Speak kindly.
Leave the rest to God.
A small request
Dear God, I pray for the cure of cancer.
Amen

I’m glad to hear you’re well and are healing!

This is my first comment on your site, and I wanted to let you know I sympathize with what you’ve been going through.

In mid-October, I was diagnosed with Endometrial cancer (also known as Uterine cancer.) I was lucky, as they caught it at stage 1A, and the lymph nodes around my abdomen were clear. The hysterectomy caught everything. I am now on the 5-year plan for check-ups.

I’m sorry you ended up having to have the “zipper” surgery. I ended up with laproscopic surgery and 5 “coin” slots across my abdomen. 🙂

Please take care of yourself and be well on your journey to recovery! I enjoy your writing and cooking and look forward to reading more!

I’ve been thinking about you and hoping all is well 🙂 I’m glad to see you wrote about it and shared with folks. I think it’s helpful to show that one can deal with cancer in a positive manner, not freak out, break down, etc. I wish you much luck and good healing!!!

I’m so glad to hear things went well. You are an extraordinary woman. 🙂
I don’t know what I could do to help you, but if there is anything, let me know.

Thanks everyone – Day 4 down and not so bad. It just seems like for every good day there is a 1 1/2 not so good yet. I appreciate the offer Diana and hope we can get together soon – maybe over spring break?

I admire your positive attitude so much. I’m so glad the news was positive as far as self-containment. I think of you often. I hope you’re up and around and feeling better since you’ve been home about 6 days now. And remember to ASK when you need something. That’s usually the hardest part for “strong” women. Sometimes you just need someone to help or listen. I’m here, not too far away.

Oh Tammy,
I am sorry you have to deal with this. This is the second time I’ve heard a cancer diagnosis in the last month from someone I know.

My prayers and thoughts are with you, cancer messed with the wrong girl. Hang in there~
thanks for sharing the beautiful story about Lucky and I too love the Erma Bombeck essay, very touching……a good reminder for us all to create a life we will love living, anything less is not good enough.

Thank you for sharing all of that Tamy! And the story at the end brought me to tears 🙂
Hang in there girl…so glad to hear things have gone so well after the surgery!! My thoughts and prayers are still with you!

What a beautiful story. Thank you for sharing this. It brightened up my day. You have such a wonderful attitude and outlook on life that I know you’ll be able to beat this. Stay strong. Sending good thoughts your way.