This month I am bringing you a family recipe and digging into my heritage, a family recipe from my Dutch Grandmother.
This wonderful flaky almond filled pastry is something that I grew up eating every Christmas. As with most food and family recipes…it always brings back such good memories of family and holidays. In Grand Rapids and really most of west Michigan it seems every one who is Dutch (which is many) has their own version or recipe for banket (pronounced bahn–KET) with a flaky buttery crust and almond paste (not marzipan) rolled throughout, not too sweet and perfect with a cup of tea or coffee. 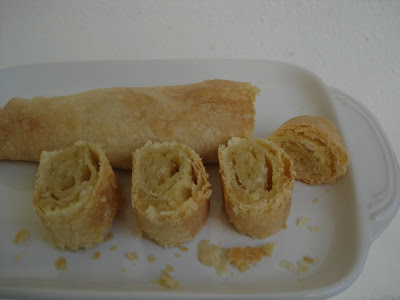 I have been wanting a chance to make it with my mother and document it for the blog, but she lives in Michigan and with me in Florida for the last 21 years it just never happened. When my parents visit in February she will bring me some almond paste and one year she did show me how to assemble it, but the filling and dough was already made.

I had my sister mail me grandma’s banket recipe (my mom could never find hers). I’ve had it for awhile but was always a bit timid to try making it on my own, besides it makes a lot and we don’t usually have many people around for Christmas any more down here in Florida. Not this year I decided to put on my big girl panties and try making it all by myself.

It is such a family tradition, my sister makes it with her daughters-in-law, and makes it her way. I never was interested in making it when my grandmother was alive…I just enjoyed eating all her wonderful baking. She was the best. My mom learned from my dad’s mom, both his parents are Dutch. My mom’s dad was Dutch, but her mom was Welsh, so she learned how to make it from my grandma Bouwman, my dad’s mom.
This was her actual recipe such as it was, like most of her recipes: my input is in blue after calling my mom several times while trying to make it.

My take on this: I used a pastry cutter like you would when making pie crust, cutting in the butter until you get a crumbly oatmeal-like texture. Use cold butter and cold milk or water so it will be nice and flaky…form into dough try not to over-work the dough. After talking to my mother she said another old recipe she had has you refrigerate the dough and filling overnight. My personal tip would be to form it into the eight balls, and then flatten them first before refrigerating them.

Filling:
1 pound almond paste (2 cups)
2 cups sugar (you could probably use a little less, but I use a scant 2 cups)
3 eggs (I think next time I will us 2 eggs)
Mix well, put in fridge to harden. Add flour to make it less sticky when putting it on crust.
My take on this: I had a block of almond paste that mom brought down from Michigan. They can get it every where up there…if you can’t find almond paste, you can make your own almond paste try this one here
My mom told me to beat the eggs and sugar first then add the almond paste after breaking it into crumbles.

Bake 10 minutes at 425° then 15 minutes at 350°
I found I had to bake this longer. If you want to bake it like a pie you can bake it high heat for 15 minutes then turn it down and bake another 15 – 20 minutes until golden brown. Make sure your dough is nice and cold. I would brush an egg wash on before baking next time, I didn’t on these and they came out fine, but sometimes my grand mother would. 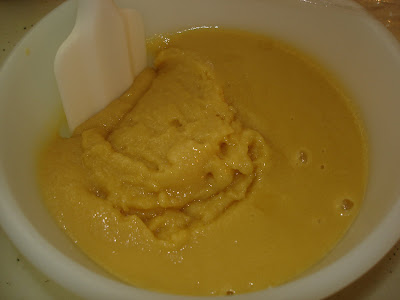 This was the almond paste mixture after it was in the refrigerator overnight.

When I was trying to mix the almond paste my mom suggested to beat the eggs first with a hand mixer, so I did, I think I did it too much and it became a little frothy, then I added the crumbled almond paste and sugar. I think I should of added the sugar with the eggs, then added the almond paste. Mine turned out fine, but it was different from my mother’s. I think 2 eggs would work fine in it. I didn’t add any extra flour because it was very spreadable this way…maybe because of the three eggs. Maybe I should stick to it this way, my mom would spread it with her hands and flour her fingers, and place little pieces around all over the dough. It was sticky to work with! 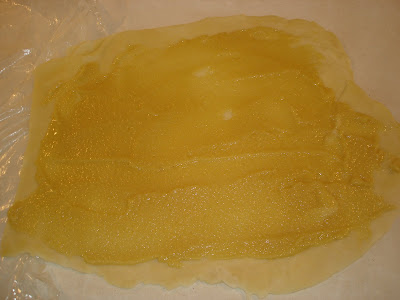 I just used a rubber spatula to spread it on. My mom cautioned me not to have too much filling do it won’t ooze out on the baking pan. She said she added too much last year and she didn’t like the way it turned out. 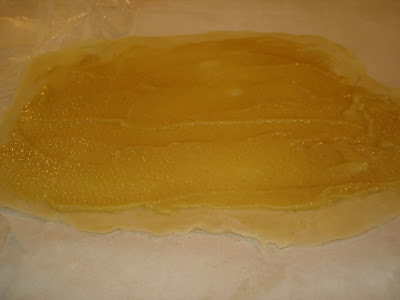 You are supposed to roll the dough out into rectangles, but I got it as close as I could, and they still turned out even without smooth edges. You can cut and paste it, the dough seems to handle it well. 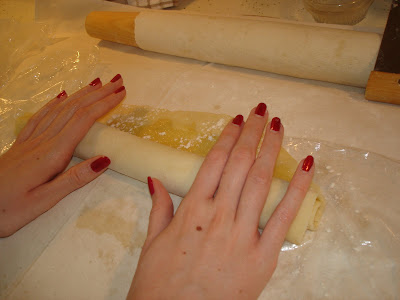 To keep it a family tradition I got my daughter involved…of course she asked to roll some of her own…so I had to stand back and let her do it!!
And she did great! Of course I have such a small area it’s so difficult to have two people in the kitchen at the same time. It was also 80° out and seemed very hot with to oven on, I know my grandma and mom didn’t have to deal with weather like that in Michigan at Christmas time! 🙂 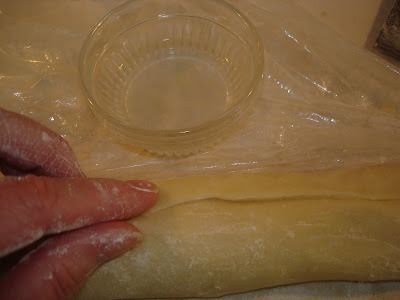 The dough is rolled out thin sorta like a pie dough would be…dusting the work surface and rolling pin with flour as you go. After you roll up the filling inside the logs, seal it with water. Since I used a little more filling than my mother did I made sure it was sealed well and gave it a little pinch too. 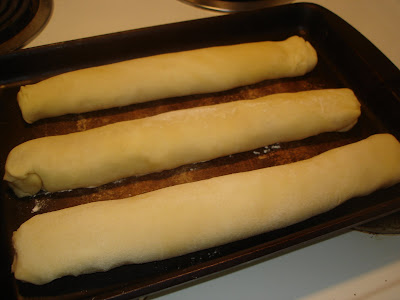 I have baked the “logs” that my mom gave me (they freeze really well) at 350° or 375° for 30 – 35 minutes. I didn’t know the directions at that time, so I think you can do it that way without having to start out baking it at high heat and turning it down. Just keep any eye on it until its a nice golden brown. 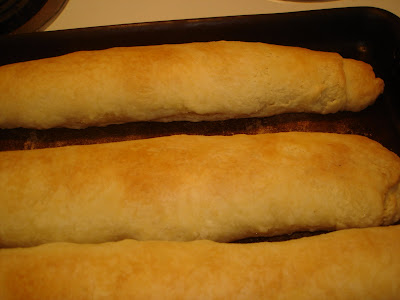 If you don’t have a stoneware baking pan or pizza stone, line your cookie sheet with parchment paper so it browns up nicely. I didn’t use an egg-wash in this batch. 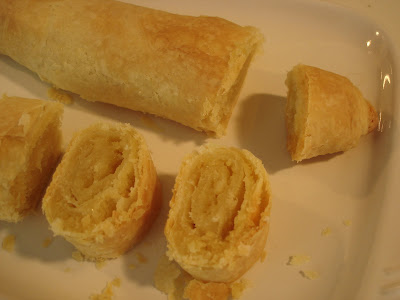 …so good and reminds me of my mom’s… 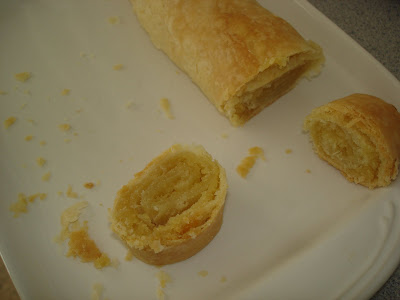 …they were nice and flaky, the almond filling didn’t ooze out (of course I like it oozing out a little when it caramelizes up a little) . 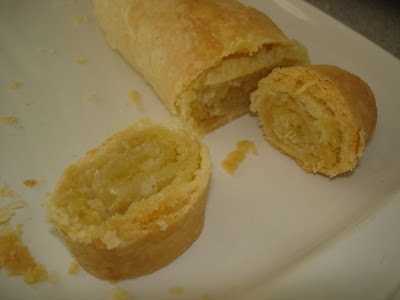 It is so good for breakfast the next morning, not too sweet, delicate flavor. 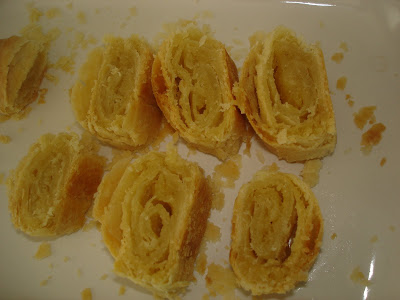 …I hope they enjoy it as much as we do… 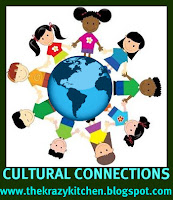 I love this any time of the week..You are making me to have it now..