AnnaBelle is all packed on her way home until next year 😀 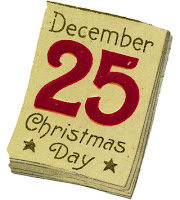 Just a little trivia: From 1558 until 1829, Roman Catholics in England were not permitted to practice their faith openly. Someone during that era wrote the 12 days of Christmas carol as a catechism song for young Catholics.

It has two levels of meaning: the surface meaning plus a hidden meaning known only to members of their church.  Each element in the carol has a code word for a religious reality which the children could remember.

Merry (Twelve Days of) Christmas Everyone – and, remember, the Twelve Days of Christmas are the 12 days following December 25th. The Christmas Season runs until Epiphany, January 6.

AnnaBelle and Alvin appear to be having a drawing contest. 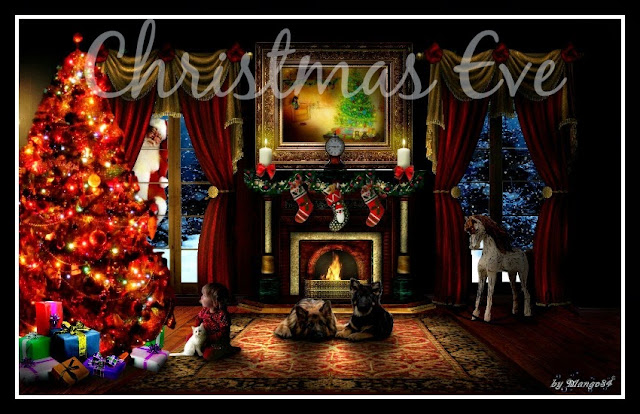 Personally, I love the hustle and bustle of the holidays. I’m a list writer and as a Virgo usually have my presents bought early and the Christmas cards ready to mail by Thanksgiving, many times they are even hand made. Having all this done and ready usually made it possible for me to go to the malls, get a nice cup of coffee and just watch other people hustle and bustle. Then I would go home and cook and bake and then bake some more!

I learned much of this from my folks. My folks would have the majority of their shopping done before Thanksgiving and then because of their hectic schedules dad would sit me down with all the gifts, a card table, wrapping paper, tape, bows and tags on the day after Thanksgiving and that was where I would spend the Thanksgiving weekend watching football and Christmas movies, eating leftover turkey sandwiches and wrapping gifts. When the gifts were done, I would start on the Christmas cards. Now this wasn’t an abuse of any child labor laws, it was how I earned a chunk of money for my own Christmas shopping. And dad was a generous employer.

Christmas Eve was spent at our house with the immediate extended family – grams and gramps, aunts, uncles and cousins and many times neighbors too. We would do a big buffet and then open all our gifts to each other and have a party.

We’d go to sleep happy and sated while waiting for Santa and then start Christmas day with stockings and brunch. By afternoon the turkey and ham were smelling great and we were ready to start all over. Oh it was the same bunch of people, but we would add a great aunt and uncle. Remember me telling you about Looney Louise?  😀 LOL we didn’t call her looney to her face, but it is what made her such fun mainly because she made us her cornflake wreaths with red hots and fudge! All of us cousins would sit on the front porch waiting for her and Uncle Herb to arrive and for our wreaths of course!   It wouldn’t have been Christmas without them!

As always I’m looking forward to the next holiday season just after this one ends, but knowing that the next one will be spent around family makes it already more special. 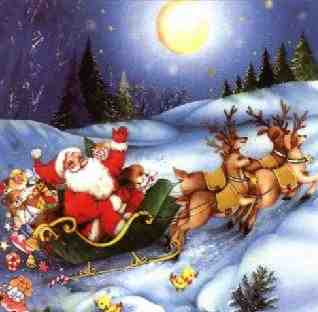 It’s Christmas Eve and Santa Claus is coming to town tonight. If you have kids, or are just a big kid at heart, you can track Santa’s progress as he travels around the world on NORAD. 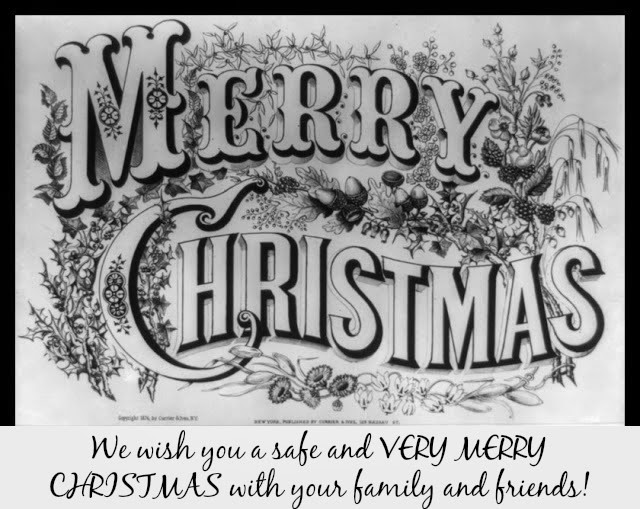 May Christmas bring you joy, happiness and everything else you deserve!

AnnaBelle and Alvin tried to help wrap te last of the packages and got all tangled in the ribbons.

Before I start this post, let me just say THESE TREES ARE JUST WRONG!! 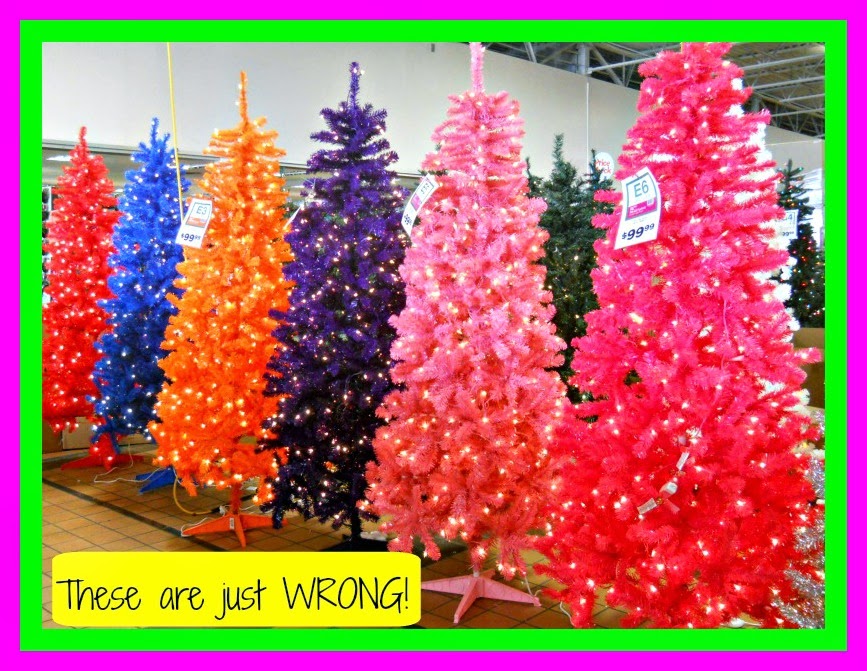 And I love how a neighboring town always does their tree right in the middle of main street. Carlie and Cady thought it was pretty neat.

Now on to our trees and decorations.  How I decorate each year changes based on my mood, weather, where we are living, etc… so it will never be the same twice! 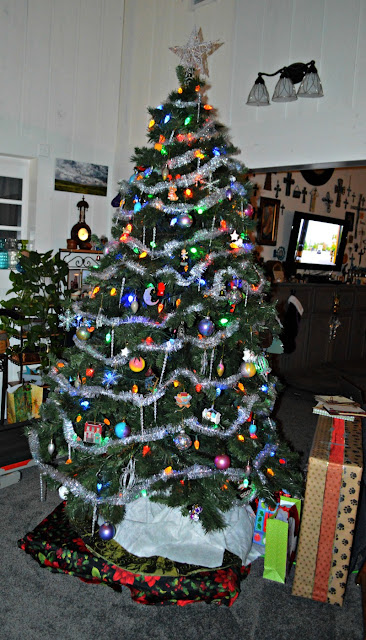 We PREFER real trees, but last year we decided with the remodel and my surgery that we would break down and buy an artificial tree.  SHHH don’t tell hubby, but I really love this tree. 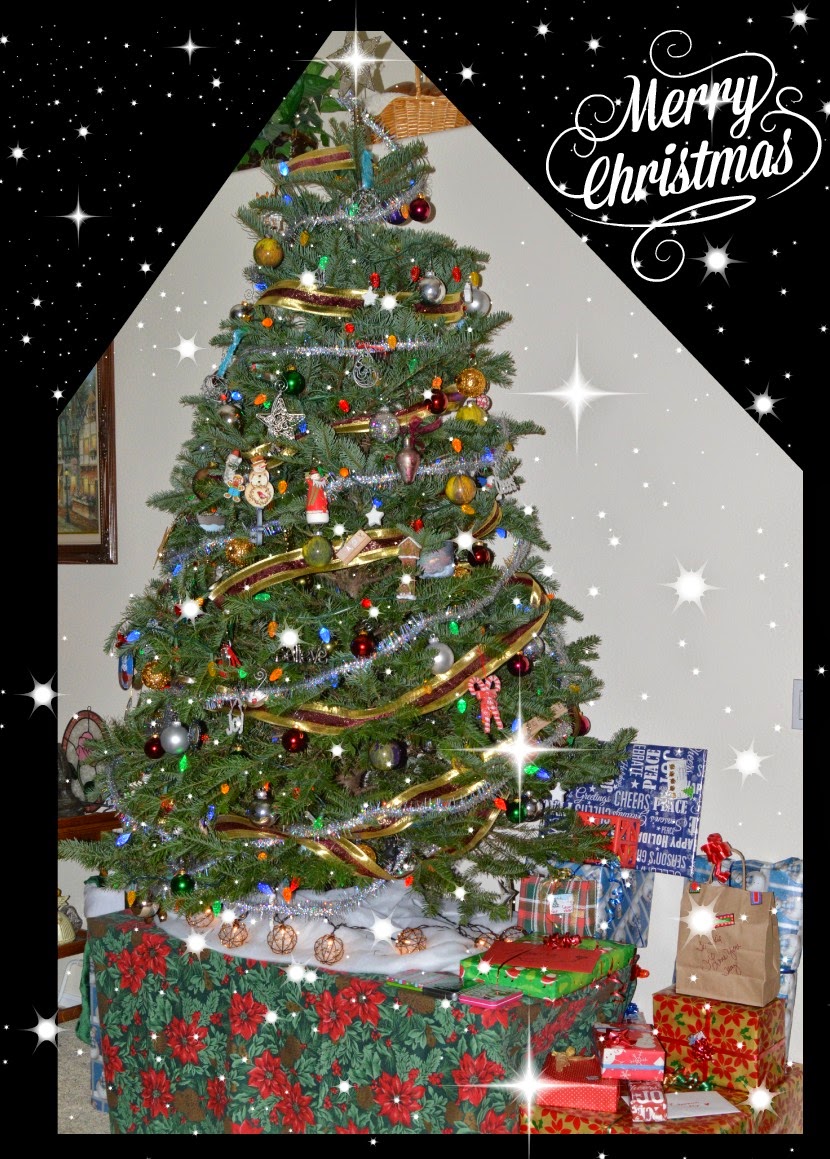 This year we have a real tree again and while it smells real I’m missing the artificial tree.   We’ve reached a compromise for next year – artificial tree with real wreaths and garlands. 😀 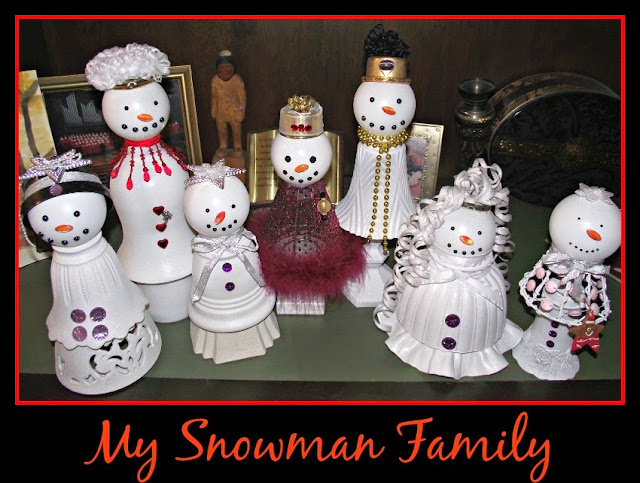 This is my Snowman Family arranged from 2 different years.

We made candle yule logs for Advent craft night at church one year and they were a HUGE success and soooooooo easy to do.  The decorations below are a few of my newer favorites. 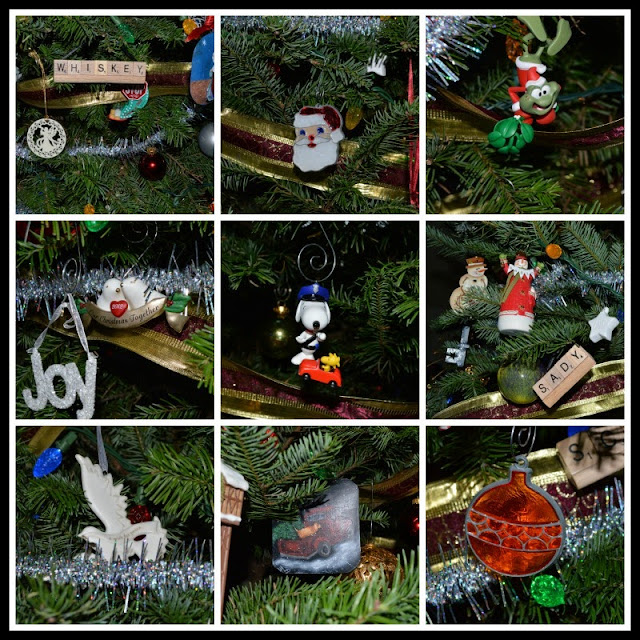 My cousin that passed away in 2014 made this ornament for me.  From now it will always be hung by my shooting stars in her honor even though I’m still  mad at her for leaving the mess called A HOUSE FROM HELL for me to deal with. 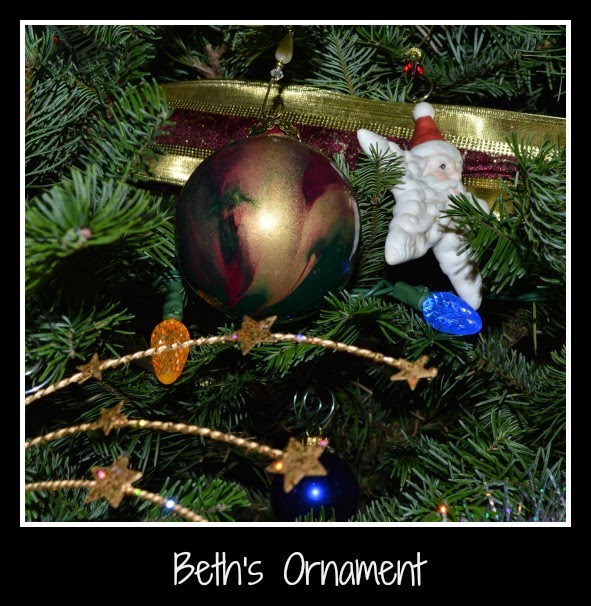 And our handmade ornament by Design Chick Creations. 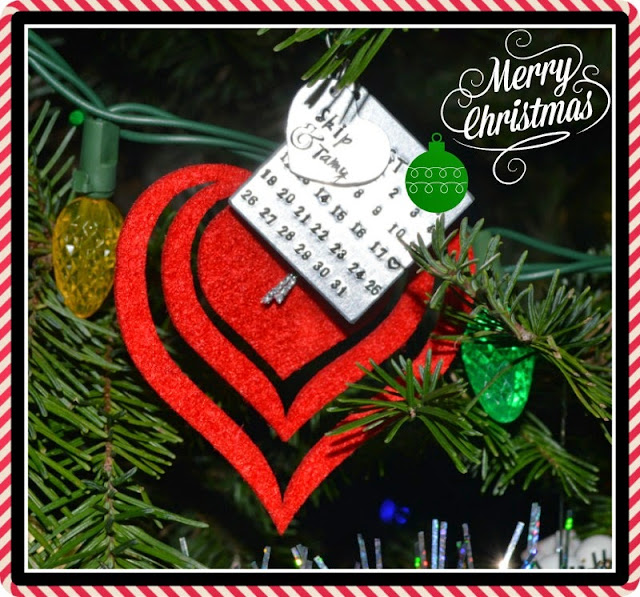 When does your family open their presents?

This category has changed a lot over the years for me as I got older.

My family traditions as a kid were of a BIG Christmas eve open and that carried on through college, but as we (cousins) all got older and began getting married with families of our own, our grandparents passed on, blended families (with their own traditions) were formed, etc… getting together for both Christmas Eve AND Christmas Day became harder and harder to do.

Eventually Christmas eve became a much smaller event for immediate family for a small dinner and to open our gifts to each other.  Christmas morning was for being at our respective home with kids opening presents and then the larger family get together much later on Christmas day for dinner at just one place, usually my mom and dad’s house which became our house after my dad passed away.

AnnaBelle and Alvin decided to help make the candies for the neighbor plates.

This is a really hard category for me.  I LOVE Christmas!  There is nothing about this season I don’t like short of maybe crowds of rude people and Black Friday.  Being a military family on a tight budget I’ve always started shopping early (like in January) to work everything we want to do into our tight budget.

If I had to pick just one tradition though, it would be putting up the tree as a family while eating leftover turkey (from Thanksgiving) sandwiches.  When I was a kid we usually put our tree up the day after Thanksgiving and leave it until Kings Day, the Epiphany on January 6th.  Hubby and I still do that and for that reason we like to go cut our own tree so it’s fresh and lasts the entire time.  I use an apple cider/sugar mix that keeps the sap from forming on the cut area and keep the water cool and full.

When I was a kid we did a BIG family get together with a buffet of food and opening our family presents on Christmas Eve.  I just saw a few of my cousins recently and we were reminiscing about some of those holidays and LOL how horrible our wardrobes were back then. 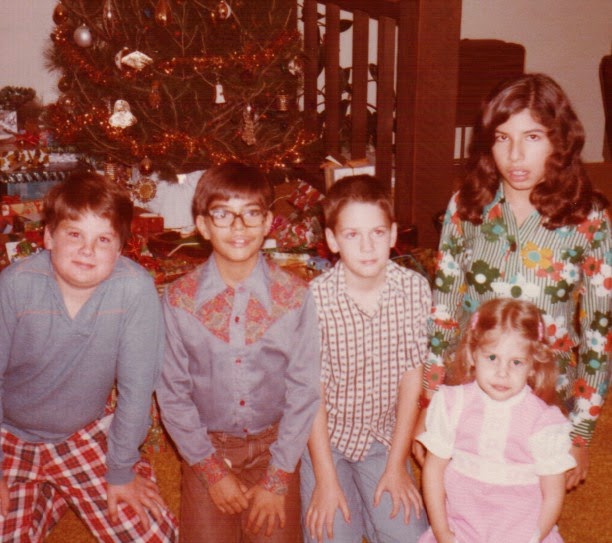 Thankfully, I’m not in the bottom picture because I remember what I was wearing! But I love my brother’s plaid pants and Monica’s floral blouse. If you don’t hear from me for a few days I’m Sure it’s because one them found me LOL.Then on Christmas Day we did Christmas morning and “Santa” with just the immediate family and then we would do a BIG turkey with all the trimmings including my dad’s stuffing and giblet gravy with all the family as well as extended family, which included crazy Aunt Louise and Uncle Herb. I replicated dad’s stuffing recipe a few years ago (Oatnut Sourdough Herb Dressing) and that is now a MUST TRADITION for the Christmas meal no matter what the protein is.

Our newest tradition in the last several years is watching Christmas movies and dreaming about moving to every small town depicted in them, kind of like Stars Hollow from the Gilmore Girls.  We loved that show!

AnnaBelle has been playing A LOT of solitaire lately.

This is a category I have given a lot of thought to.  Christmas is full of tradition and with tradition comes a cyclic nature in how we do things year after year.  Our traditions and practices though stem from our experiences.  As life progresses things change and evolve over time.  All of this is my round about way of saying that in a future Christmas I would like to revert and try an inverted Christmas tree. 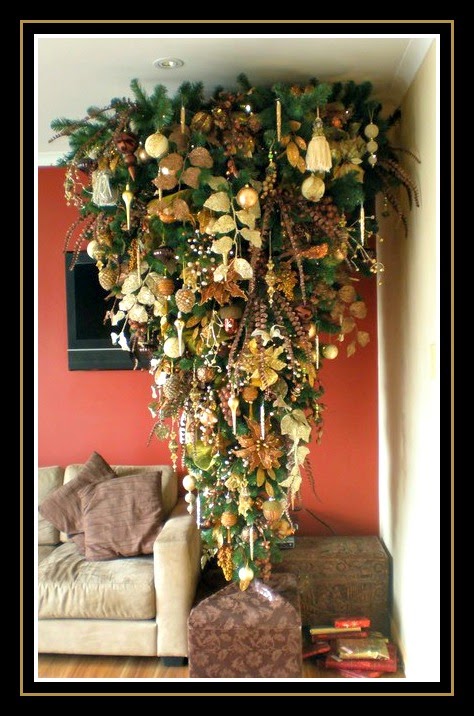 I found several places offering background on the upside down tree. One was, ChristmasCarnivals.com which also has many other links for Christmas history to check out too.