Print
These first 2 pictures are what were taken when the house was on the market. Cute kitchen and sun porch right? I couldn’t wait to make that sun porch my studio/office. 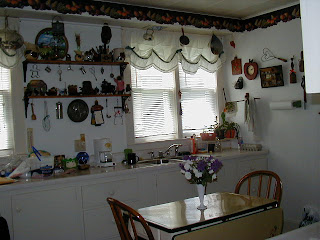 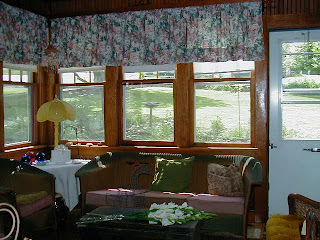 These 2 pictures were taken of the kitchen just after we moved in and got everything put away. 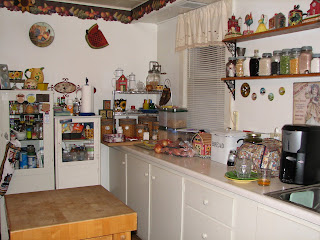 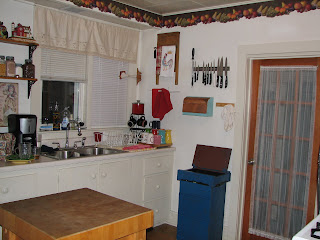 We didn’t have any furnishings for the sun porch so we put my studio table our there and it became a staging area for unpacking and keeping the clutter out of the house itself. It was going to become my studio/office. It worked out great until it started to flood under the side wall. After we pulled up the old moldy carpet and linoleum I sat and cried and then we got to work. This truly became a work of Blood Sweat & Tears ~ all ours! 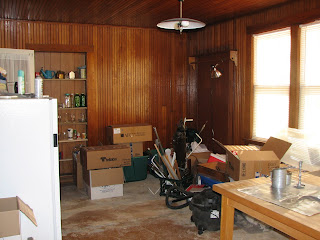 Hubby is pulling out the drywall that backed up to the downstairs bathroom where this all began. Before it was all over we also found mold in the cabinets. The interior shelves had never been painted and the underneath sides especially were atrocious. They had been contact paper over so it was pretty gross. 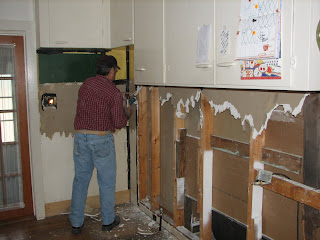 We were hopeful at saving the sun porch, but began to be doubtful and even hesitant at every board we pulled off and found more mold. We feared there would be no end. 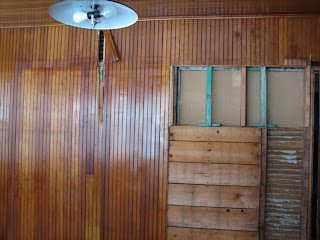 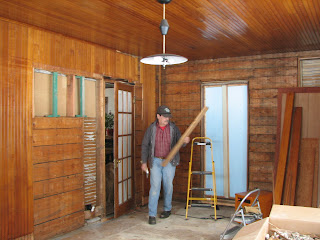 After we removed the ceiling of the sun porch we also found that the ceiling joists were only old 2×4’s and ‘sistered’ together. There were no continuous joists anywhere in the room. There was also no insulation in the ceiling though we were told there was and there was a roof leak that the next door neighbor told us the previous owners had been trying to find, but never had. (We were never informed of the roof leak). Hubby put in continuous 2×6 ceiling joists and then we added R22 insulation throughout before putting up new drywall. We were told that the entire house had been insulated by the gas company in the years past for the elderly lady who lived here from 1948-1983, but these 2 rooms only consisted of crumpled up old Russian newspapers for insulation. 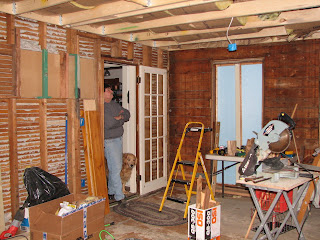 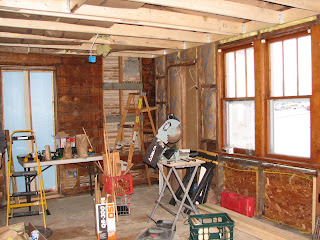 As we were pulling off each board we began to see a vision. As long as these walls had to come out to remove the mold, why not leave them off? So we closed up the original 30 inch door opening and made an 8 foot opening into the kitchen area to make a single “L” shaped family kitchen. And no, I didn’t really give up my studio. The formal dining room and parlor are becoming my studio/office as well as the 4th bedroom when necessary now that there was room for the large table in the kitchen. 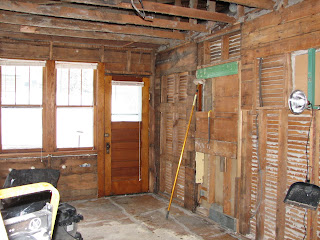 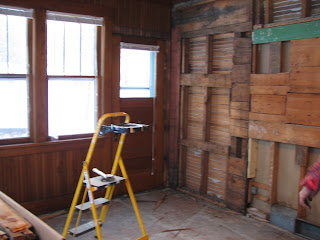 So the above walls became this: 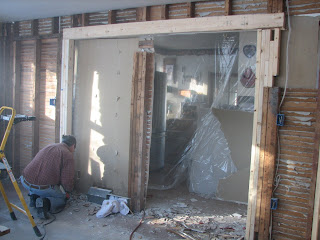 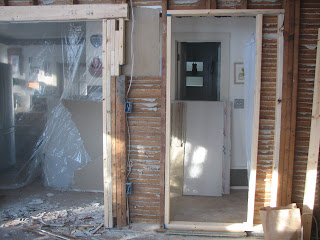 We strengthened the opening supports and increased the header to bring the entire area to code. As you look through the small doorway in the above picture you see the door to the downstairs bathroom where we found the original mold locations. That was then closed in to create a linen closet on the bath side of the hallway and cabinet space on the kitchen side. 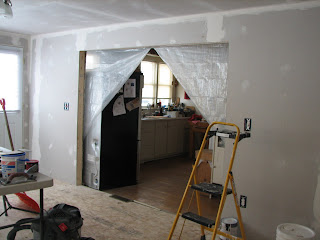 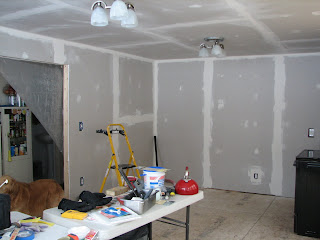 Don’t mind the yellow, it was our version of primer to brighten the place up! 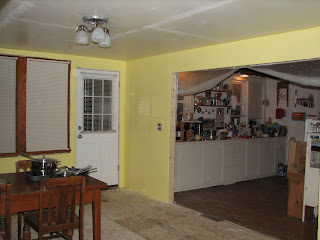 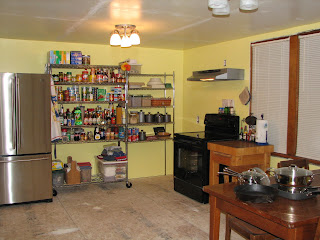 We were a long way from completion but at least we were solid now and the mold was gone, at least from the kitchen. The electrician came through and installed all new wiring and brought the entire kitchen to “code”. We installed 2 fixtures like this on the larger old sun porch side and one in the center of the old kitchen side. 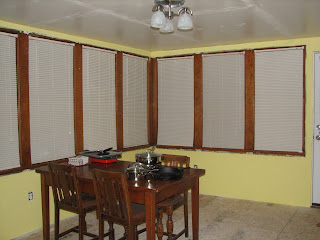 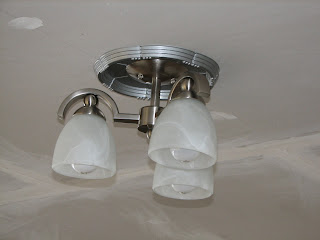 Now the fun began. We needed cabinets and appliances. We had purchased the house with what we were told were a ‘couple’ of year old appliances. It turns out they were 14 years old and when the oven went out on Christmas Eve and then the refrigerator of New Years we were told they weren’t covered by the home warranty insurance due to age. We opted at that point to move the stove to the “new” side of the kitchen. The old stove was gas so we decided to make the new one electric out of ease on the cost of moving the gas line. It also allowed up to move the washer and dryer (previously in the basement) up to the first floor. The dryer was gas so it now connected to the old stove line. The washer and dryer went the way of the old stove and refrigerator when we discovered mold in the washer too and the dryer heating element went out. They too were not covered by the warranty due to age. 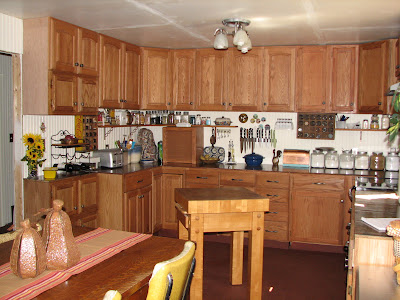 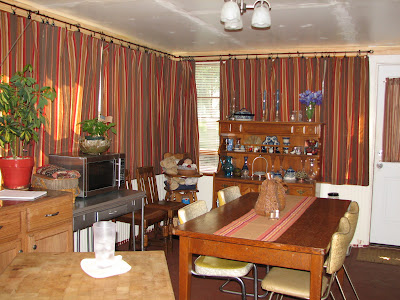 We found a cabinet distributor going out of business and his floor models matched VERY closely what Home Depot was selling on the floor. So we purchased his floor models to get us started and then purchased each successive unit as we needed and could. For the walls we used 4×8 sheets of plywood bead board over the insulation. We have just started working on trim molding and still have the ceiling and floor to finish, but those seem like little things compared to what we have already had to do. 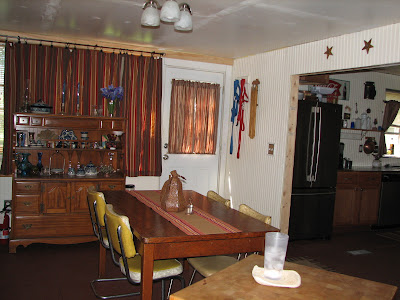 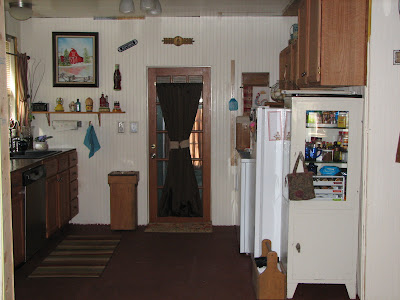 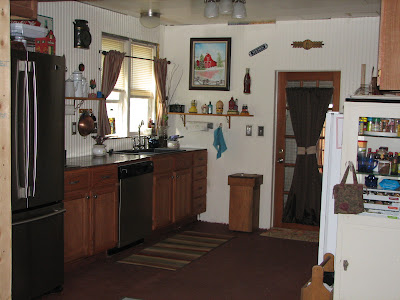 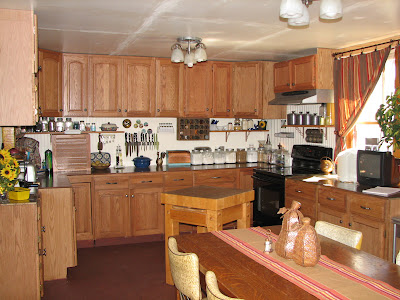 I made custom shelves for the decorative jars that turned out quite nice. The cabinets are in various stages of staining; some done, some a single coat and others with 2 coats. So eventually the cabinets will all be the same colors. These are actually now ‘old’ pictures. Tomorrow I will update with current pictures as I continue the story and describe the rationale on the locations. 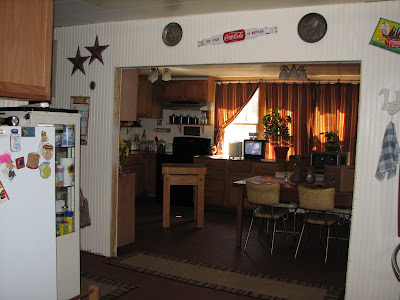 Oh good heavens. Our restoration was and is similar to yours. We still have three rooms to go and one of those is the sun room. I’m scared.
When I redid the downstairs bath, I also found the black mold. Asbestos roof, lead paint…. no insulation. It goes on.
We just found out this week that the entire plumbing system needs to be replaced.
It IS a labor of love because no amount of money could entice me to do this otherwise.
I’ll come back to cry with you dear.

Thank you for all the great encouragement everyone. We tried working with the realtor who said we had to deal with the previous owners directly who of course refused our calls and didn’t answer our letters. We’ve tried an arbitrator, but she is worthless. The lawyer is next. We keep being told back here that they do things much more lax than what we were accustomed to, not that it’s legal or right, but has become our problem.

As for the home inspection, he was wonderful, but not a mind reader and inspected the home just after the fresh paint. It was summer and the windows were open. He couldn’t smell anything and didn’t see anything. His inspection was the first week of September and we didn’t move in until mid October.

I have award for you on my blog. Thanks for always having a thought or recipe to brighten up my day!

Great Job on the kitchen, looks great! Although I think you should seek a lawyer unless the seller told you there was mold in those areas. He/She would have to pay for damages depending on where you live. Did you get an inspection done before purchasing the home?

Wow gal, amazing work! Seems we bought ‘sister’ homes. Ouch. The nice thing is, you have a hubby that can do that work. Mine can’t and doesn’t have clue one on how to accomplish it. So everything we have to do to this place we have to hire out. Needless to say, not a lot has been done around here.

Good luck, looking forward to seeing your ‘all done’ pic’s!

Wow Tamy that was a huge change, it’s just beautiful 🙂

You and your husband should be very proud of the transformation – it’s BEAUTIFUL! It looks like a wonderful place to call home.

What a great job with a cool space! CongratS!

Yes, Tamy. You and your husband have really rescued that old house. Beautiful work!

Wow – what a huge transformation! You have done a great job. It looks wonderful!

Have a great day Tamy!

what a huge transformation! it looks great. i bet you are so happy. i love all the cabinets! i need more cabinets too!