It is the holiday season, which unleashes a torrent of parties and get togethers.

That means it is advantageous to have an extra appetizer, hors d’oeuvres, or dessert snack trick up your sleeve. So tonight I played around with an idea I had for an appetizer. This is work in progress kind of thing. 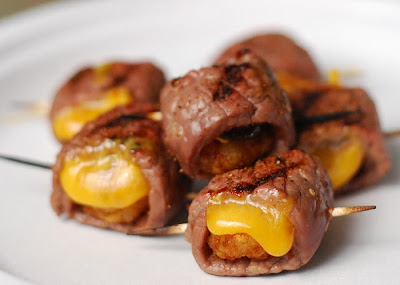 I know. That’s twisted. But sometimes you just have to cut loose and do something different.

For the first round, I cooked tater tots (well, actually Ore Ida Crispy Crowns) according to directions. I placed each one on a 1″ strip of milanesa style sliced beef (thin sliced sirloin) and topped with a variety of ingredients like pickled sweet jalapeno (we used Hobo Howey’s Jalapeno Treats), cheddar cheese, and steak sauce. 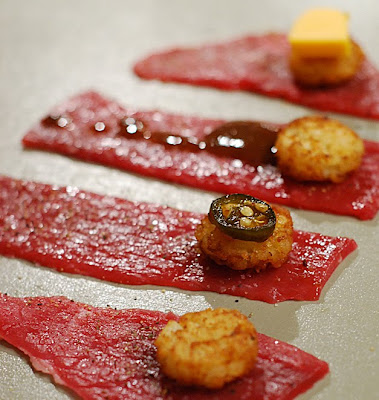 I rolled them up and secured with a toothpick and seasoned with a little bit of steak rub (I used Dizzy Pig Cow Lick). 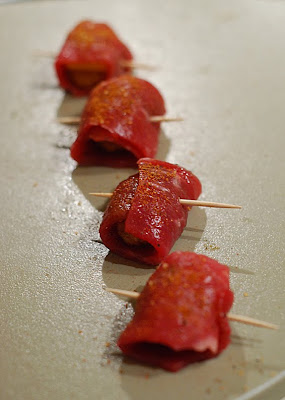 I tried cooking them on the griddle plate of my grill cooking at 450f. It only took 1-2 minutes per side. 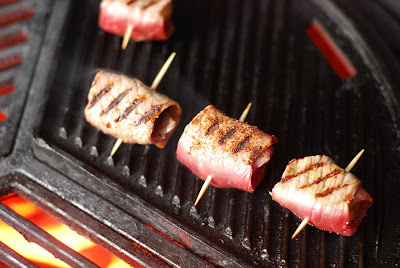 While it gave good sear marks, the sides didn’t get much radiant heat so they weren’t as evenly cooked as I would have liked.

It was 35f outside while I was cooking these, but I could not resist making a second attempt. This time I did the same thing but went with direct heat. 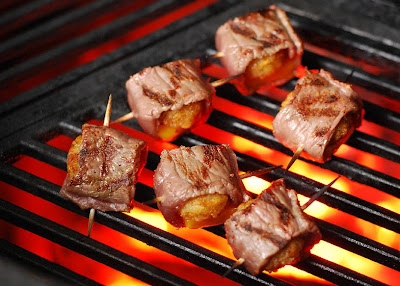 That cooked through much better.

And despite my fears the cheese would melt out during the cook, it finished just right. 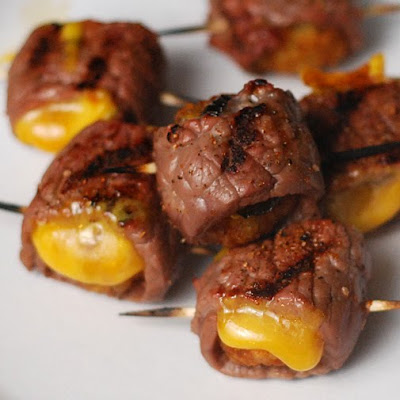 Tell me: When the pressure is on during the holidays, what is your “go to” appetizer/snack?

Very creative variations on a theme. You’ve inspired me to try something similar for an upcoming appetizer party. Great job!

What a perfect appertizer, or should I say meal in one… steak and potatoes in each bite.. just right.

What a terrific and inventive creation! My favorite quickie appetizer? Probably shrimp cocktail with a homemade dipping sauce.

I LOVE this idea! I will for sure be trying it soon. 🙂 Our favorite go-to appetizer are sugar dogs–lil smokies, wrapped in bacon, covered with brown sugar and cooked in the crockpot. It’ll probably kill you, but it’s so yummy!

Such a guy food! These are perfect for tailgating time. I’ll make them this Sunday for hubby! I know he’ll say thanks with 2 thumbs up!

Very creative Chris and I like your “entertaining” comment. With steak, potato, and cheese, they have to be good.

Now how can you go wrong with meat n taters?? I just tried a new app – a log of goat cheese rolled in green craisins and lightly chopped pistachios with a side of crackers – easy and festive looking.

I love how creative you got on this one Chris! We are big tot eaters in this house, so it would go over well for sure. And the sweet pickled jalapeno cheddar combo…yea, I could go for that!

This is so right up my alley! Yum!

Love this recipe; I’m keeping this and I hve a feeling it would quickly disappear from the app, plate.
Rita

The are very creative! I’d gobble them up too.