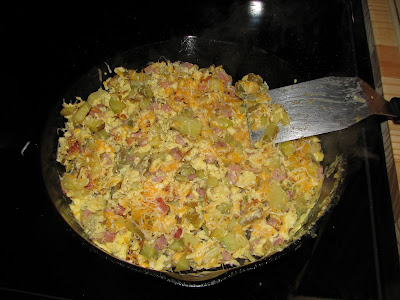 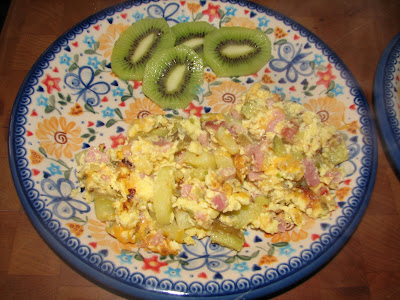 This is another one of those recipes that has floated around for so long that I have no idea what I tore it out of. The paper has yellowed, the edges look like they have been gnawed on, but the flavor is the same and perfect for a long lazy weekend!
FARMER’S BREAKFAST
1/4 cup butter
2 cups small cubed uncooked potatoes
1 large bunch green onion, sliced thin
1 cup cubed ham
6 eggs
3/4 teaspoon sea salt
1/2 teaspoon celery salt
1/4 teaspoon white pepper
2 tablespoons heavy cream
1 cup shredded Monterey Jack/Mild Cheddar combo

*Using an electric stove, I switch burners and start with a cooler burner at this point since cast iron does not cool down as quickly. I like the cast iron though for the nice crisp edge to the potatoes.

hmmm..that sounds soooo good! you made me hungry..maybe i should try this recipe. it seems so easy! thanks for sharing!i’m your newest follower. anyway, i just posted something and hoping you’ll check it out (AND FOLLOW BACK?!) if time permits! lol..

HEY BLOGGERS! LET’S FOLLOW EACH OTHER SO WE CAN EXCHANGE IDEAS AND KEEP IN TOUCH. LET ME KNOW IF YOU’RE ALREADY MY FOLLOWER SO I CAN FOLLOW YOU BACK ASAP! CHEERS!

Sounds really good, hope you had a great 4th 🙂

Sounds yummy! Happy 4th to you, too!