Several years ago I found an awesome sale on roasting chickens and more importantly found this awesome 8 pound bird.  Yep, I said 8 pounds.  We got several meals out of this one!  As for the leftovers, we had a Chicken Caesar salad and some Chicken a la King – which we hadn’t had in eons!
I wrote the recipe though based on a standard size bird. I also swear I had bacon in the meat keeper, but it wasn’t there so we made it with hard salami and guess what?  It was awesome!  Honestly the main purpose of the meat is to keep the moisture in. 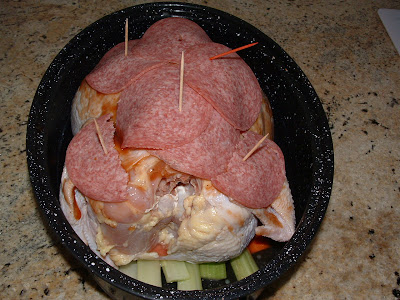 […] and cranberry sauce (I’m the only one who would touch that stuff). As much as I wanted to try this recipe Tamy from Chasing My Life shared, ultimately, I simply roasted the turkey since I wanted to make sure all the picky eaters ate and […]

This sounds wonderful! Do you think it would work with one of those smaller turkey breasts as well or would it be too dry? (Happen to have one in my freezer…).

It definitely would work. I have done turkey breast where I completely wrapped it in bacon. Just adjust the roasting time based on weight. Have a wonderful weekend.