So we’re trying to bring a 115 year old kitchen into the present as far as modern conveniences, but maintain that country kitchen charm that goes with the character of the house. Sounds easy? You’d think so, but because we had to tear out all the moldy parts including the cabinets this is no easy task. We literally had to tear down to the external walls and start over. We’re still really ticked off at the previous owners for their ‘fraudulent’ ways of non-disclosure; it’s cut and dried that they lied and purposely tried to cover up and hide the mold, but we’re not sure it is worth the cost of lawyers to win the satisfaction of winning the case from them and then trying to get the money back after the lawyer’s cut, well that’s a discussion for another time. 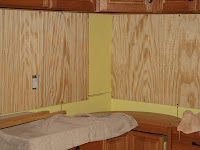 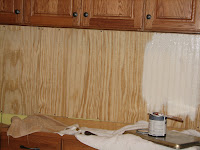 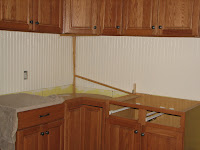 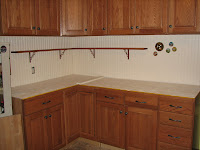 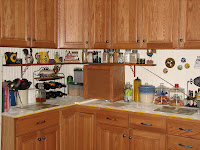 Anyway, I digress. Back to the kitchen… the cupboards are new, but we’re installing wainscotting board between the upper and lower cabinets to try and give it that “Walton’s” feel. The ceiling is several inches higher than a standard ceiling of today so that gives us a better canvas to work with in creating a spacious work area. We want to do some type of tin ceiling and probably an oak plank floor, but for today we accomplished some of the wainscotting and it is beginning to feel like the home we thought we bought.

We still have another half to do eventually, so it won’t always be this cluttered looking.

As for the counter itself, We’d like to do a creative touch, but haven’t decided exactly what yet. Tile’s a pain in the neck, maybe a thin set concrete something… for now painted MDX will do, but we’re also thinking of a birch or maple plank counter that we’ll do ourselves eventually. Have your priced counter tops recently? The cost would turn anyone into a do-it-yourselfer.

It looks awesome!!! I know there’s a really great book about pouring concrete counter tops. I looked at it a couple of times at Expo before they closed. They had all kinds of neat effects. We’re thinking about doing on in the bathroom downstairs and/or for the “shelf” between the dining room and living room.