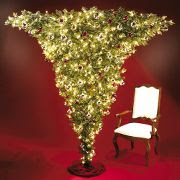 I’ve been wondering about the upside down Christmas trees and decided to search and see what I could find out. I found several places offering background on the upside down tree. One was, ChristmasCarnivals.com which also has many other links for Christmas history to check out too.

An upside down Christmas tree is pretty but odd.