Did you know the meat that you are buying at the grocery store is not the same as the meat your mama bought just 20 years ago?  Pork, poultry, beef and fish… they are all changing.  I’m going to get on my soap box here for just a second, but the neighborhood grocery store has evolved.  Factory farms now produce most of the meat sold in stores, and more importantly, all of the meat if you are budget conscious.  While cheap is good, it is almost impossible to justify paying twice as much for meat that is locally and organically produced.  It’s just a fact.

Let’s talk pork.  20 years ago, a pig was at least 6 months old before achieving his purpose in life (slaughtered for meat).  Now, with advances in feed and farm techniques, a pig achieves it’s special purpose in 3 to 4 months.  But, the meat is not the same.  Pigs are leaner than they were 20 years ago.

Also, when was the last time you saw a pork chop with the bone attached.  Often now, you pay more for the less processed bone in chop.  Market research has decided that boneless meat is more appealing and sells better than bone in.  But that also means your meat has a different flavor, plus…

That also means all those recipes from Mom are just slightly off.  With less fat, with fewer bones in your meat, it is much more difficult to cook pork chops (as an example, but any pork cut is the same) the same way Mom cooked and get the same results.  It’s not mom’s fault  that her cooking skills have gone down hill.  It’s the ingredients.  The pork chop she learned her skills on is not the same as the chop she buys today.

But that’s OK, as long as you know.

Cooking time is not as important as internal temperature.  Those little electronic temperature gauges with attached probes that go right into the meat and stay there throughout the process are a Godsend. 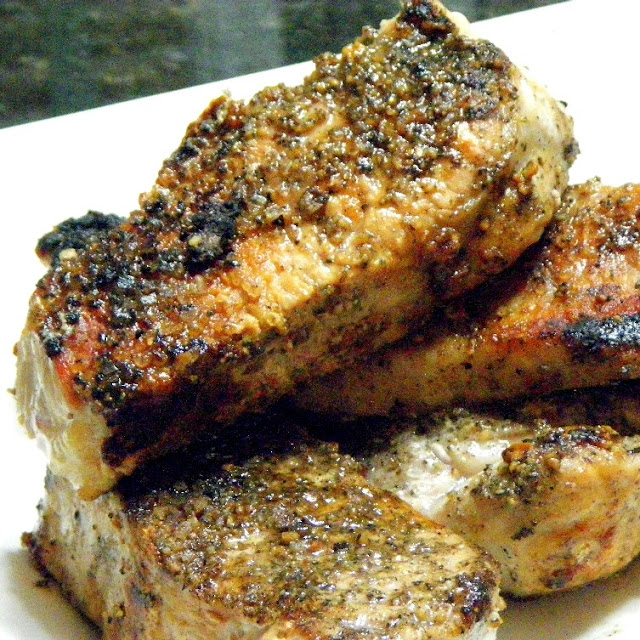 Here’s the last batch of pork chops I made.  Thick cut, just salt, pepper and a little Worcestershire sauce in a frying pan.  Cooked to an internal temperature of 160 degrees only.  Put the probe in the center of a chop (from the side, you can’t really tell the center from the top).

If it gets to 180 degrees, it will be tough, dried out and very chewy.

Same goes for your turkey.  It takes less time today to cook a bird than the same size bird from 20 years ago.  Cooking by time is a sure way to serve dried out bird.

It’s Christmas.  Treat yourself.  Get and use an internal temperature probe thermometer.  Kohl’s has them on sale for less than $20.

With the price of meat these days, it’s a bargain.

Seriously, ask your mom about shopping in her day.  It’s not the same, so cooking techniques need to change as well.

Take this probe and shove it!

Wait….you picked a much better title:)

Great information and I think I should really take my thermomter and leave it by the stove.
Rita

Oh so true Dave!!!!!!!! I do love grams old recipes though that called for 5 cents of this or that, but as you said that amount bought something different back then than it does now. Personally, having learned from the old girl I cook by site and sound – like when frying chicken, she taught me not to turn it for the first time until you see blood and it always works. The hardest thing for me to do is quantify a time per side.