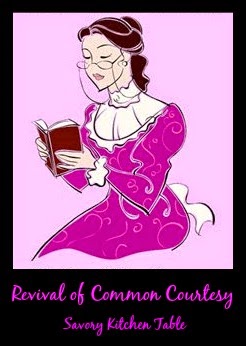 A friend of mine emailed this to me today: “Life is too short to wake up with regrets. So love the people who treat you right. Forget about the one’s who don’t. Believe everything happens for a reason. If you get a second chance, grab it with both hands. If it changes your life, let it. Nobody said life would be easy, they just promised it would be worth it. Friends are like balloons; once you let them go, you can’t get them back. So I’m gonna tie you to my heart so I never lose you.”

It really made me tie together several thoughts I’d been having lately.

When I was a little girl I was taught (as most of us were) to say please, thank you, you’re welcome, may I? (which is truly different than can I?), excuse or pardon me, etc… I was forced to sit and write letters and thank you notes to grandparents and aunts and uncles for gifts they had sent because it was the thought that mattered and we needed to let them know that we felt blessed because they wanted to give to us… I was taught children had to be polite and courteous to their elders…

My father once told me as a teenager that it was okay for me to ‘debate’, but not to argue with an elder and that I better have my facts straight before I get too deep into the ‘debate’.

He also taught me that if you have something negative to say, you should always start with a positive so you don’t put the other person on the defensive before they hear what you actually have to say. He was also known for saying, “You can’t have a battle of wits with an unarmed person.” which became one of my personal favorites as I grew up and met more and more people.
So, here’s my question, if we were all taught this, why isn’t it being passed on to the next generation? Or am I just having that battle of wits with unarmed people.

There are a couple of family members (who shall remain nameless) who seem to be under the impression that what they believe, what they want and what they say is more important than anyone else’s thoughts, beliefs, wants & needs. Their ‘silver spoon’ sense of entitlement has been the subject of many a conversation at our house. These family members are the same ones that we never receive a phone call, card, gift or thank you note from for ANY event in our lives. Not to mention they feel it is okay to complain about their gift and or request a certain item in advance for their ‘day’. I have threatened more than once to send them each a copy of Emily Post with the necessary passages highlighted. My hubby always talks me out of it. Thank God for Fedex. At least I can track and know the packages get there. Is it too much to expect that they at least let me know the package arrived or at least appear to appreciate the time, thought and effort it took to pick out the gift that best fits them?

All of this reminds me of a Bill Cosby quote, “I don’t know the key to success, but the key to failure is to try to please everyone.” that pretty much says it all!

I believe the next time a ‘gift’ event rolls around that I will send a donation in their name to my favorite charity and ‘kill 2 birds with 1 stone’. At least the charity and I will both be pleased.

Does anyone out there agree with me?