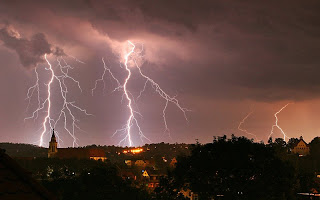 A little girl walked to and from school daily. Though the weather that morning was questionable and clouds were forming, she made her daily trek to the elementary school. As the afternoon progressed, the winds whipped up, along with thunder and lightning. The mother of the little girl felt concerned that her daughter would be frightened as she walked home from school and she herself feared that the electrical storm might harm her child. Following the roar of thunder, lightning, like a flaming word, would cut through the sky. Full of concern, the mother quickly got into her car and drove along the route to her child’s school. As she did so, she saw her little girl walking along, but at each flash of lightning, the child would stop, look up and smile. Another and another were to follow quickly and with each, the little girl would look at the streak of light and smile. When the mother’s car drove up beside the child, she lowered the window and called to her, “What are you doing? Why do you keep stopping?” The child answered, “I am trying to look pretty, God keeps taking my picture” “Face the storms that come your way and don’t forget to SMILE!” ~author unknown