When we first arrived to these temporary digs back in late January, the lake level was at 16% after several drought ridden years. This house sits overlooking the creek that fills the lake and was entirely dry when we first arrived. It didn’t stay that way long! The rain began within 2 days and now less than 2 months later it is at 61% and the water has quit running at this location of the creek. Quit running because it is now filling quite nicely. Yesterday we started seeing fish swimming by and then this morning we started hearing quite a bit of “splashing”. We hiked down the hill to get a closer look and here is what we saw… They out on quite a show for us. 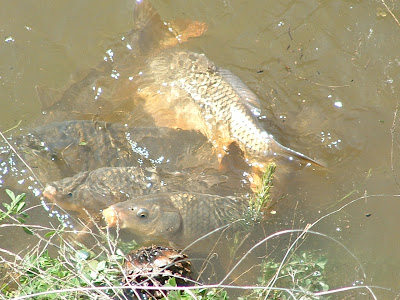 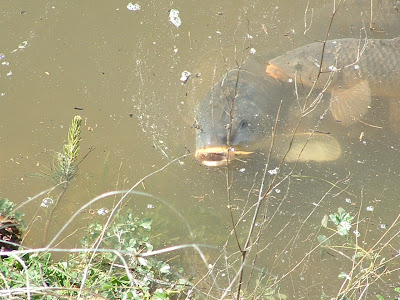 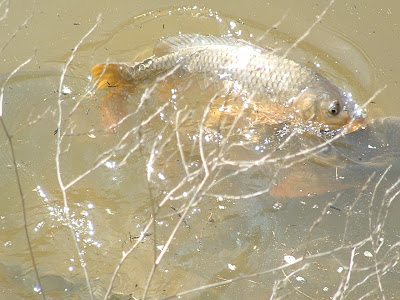 Ordinarily they spawn only once each year, in the spring when the water temperature reaches the preferred condition. In the northern regions the spawning doesn’t begin until late April or May. Yet the entire reproduction process there may not begin until June.

Bass and catfish are typically school fish for the greater part of the year but they disperse or scatter when the mating season approaches and they become very territorial about their bedding locations.

There will probably be ten beds back in protected embayments for every one located along the banks of the main body of water. Selected sites will be where they are not buffeted by prevailing winds. Mud shallows won’t do unless nothing else is available. Normally, nests are seldom closer than twenty to twenty five apart in order to escape from potential predator “cousins”.

The male serves the most important and active role in the spawning behavior of the species. The male “buck” selects a suitable bedding site and then fans out the nest. When the water temperature has remained at spawning level or above for several days, the females begin to appear. The female lingers in “holding-areas” near deeper water, awaiting preparation of the spawning beds. The male searches out a “ripe” female and herds her to the bedding location. Once on the bed he may swim continual circles around her to discourage her from leaving and may even repeatedly bump her ventral region with his nose to trigger her into dropping her eggs.

In most cases the female will drop only a portion of her eggs on a nest at any one time. The male then spreads his fertilizing milt over the bed and eggs. Days later, with another male, the female may drop more eggs on some other bed not far away. Several females frequently deposit more eggs in the same nest as well as in others. Multiple attempts at egg laying are probably nature’s insurance policy, since a certain percentage of beds or eggs each year are sure to be accidentally destroyed due to radical fluctuation in water levels or abrupt changes in water temperatures.

Eggs may hatch anytime from two to five days after they have been fertilized by the buck and are cared for by the male parent for the bass – until his appetite gets the better of him. And 6-10 days for the catfish, but he remains with the young. His work is to prote­ct the eggs and keep them aerated and free of sediment by constantly fluttering his fins to circulate water. He continues to protect the young until they leave the nest.

The male largemouth will remain near the bed to protect the young fry from predators for a short while, usually not more than a week. He eventually succumbs to his increasingly ravenous hunger and becomes a leading predator himself, gobbling up as many of his own fry as possible.

During the six- to 10-day hatching period, the papa catfish eats little. His work is to prote­ct the eggs and keep them aerated and free of sediment by constantly fluttering his fins to circulate water. He continues to protect the young until they leave the nest.

The hatched fry initially feed upon plankton and other minute aquatic organisms, later switching to the smallest of crustaceans and terrestrials, including various insect forms which commonly flit about most shallow-water areas during the spring and summer. Young bass that survive feed on tiny water animals called Cyclops or Daphnia. As they grow older they add larger and larger insects to the menu.

A bass’ life is one of eating and being eaten. It is an aquatic rat race to survive. Insects and amphibians compete to eat the eggs as soon as they are dropped. After they hatch, larger fish are always seeking the fry. Even their own parents and other bass feed upon them. And it’s only fair to add that anglers are the least serious threat in the entire life cycle. When bass are about five inches in length they may also feed heavily upon small minnow species.

The well-planned scheme on the part of Mother-Nature causes them for the very first time to begin fending for themselves. This instinct of self-preservation is usually accomplished by remaining in or around heavy shoreline cover, hiding from those who would make a meal of them in short order.

The young fry up to an inch or more in length linger in a family school. This schooling instinct remains with the fish throughout his life. With many predators now feeding upon the small fry, it is early on that a young bass becomes adept at hiding and soon accepts the philosophy of “eat or be eaten”. This activity is exhibited throughout the life-span of the bass and is a major consideration for a bass angler in locating and catching the species. 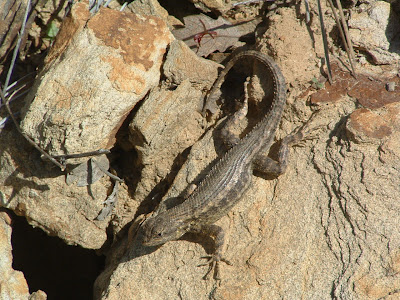 This little blue belly lizard was enjoying the show too! 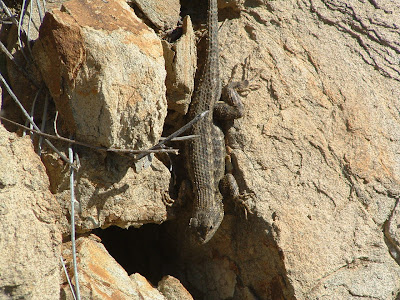