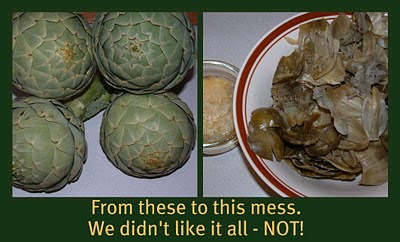 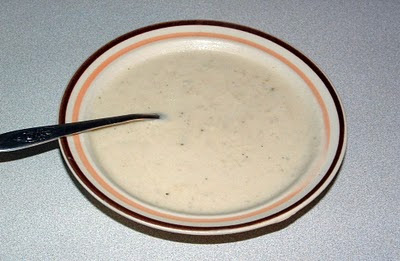 I had made out my menus for the week and then WHAM the new sale ads came from my local stores. There are 3 stores all within 5 miles which makes it soooooooooo easy to make a list for each and get the best sales. Then I walked in to my favorite one and saw these as an unadvertised special. My taste buds became instantly alert and drooling as my mind was saying be careful they have been so expensive lately. Some stores have actually been charging up to $5 for a medium size artichoke. So when I read the sign for these extra large babies and saw 2/$3 I quickly amended my menus to include these babies.

The first night we had Shrimp Scampi and I kept the leftover scampi drippings and heart from the first artichoke we steamed to use as a base for the soup. I was afraid that because they were sooooooooooooo large they would be flavorless and tough, but it was just the opposite, they had more flavor than I can remember in a long time. Now I have a sneaky suspicion that many restaurants add a touch of food color as mine turned out a very pale green.

So for tonight, we’re having:

We just bought some too. Nice idea to use them in soup. Will have to try it out.