We had an all systems go with our move.  We moved all the things upstairs down in an effort to speed the loading process when they get here tomorrow as we will be on the road right behind them and don’t want to be driving in the dark.  We worked hard too!! 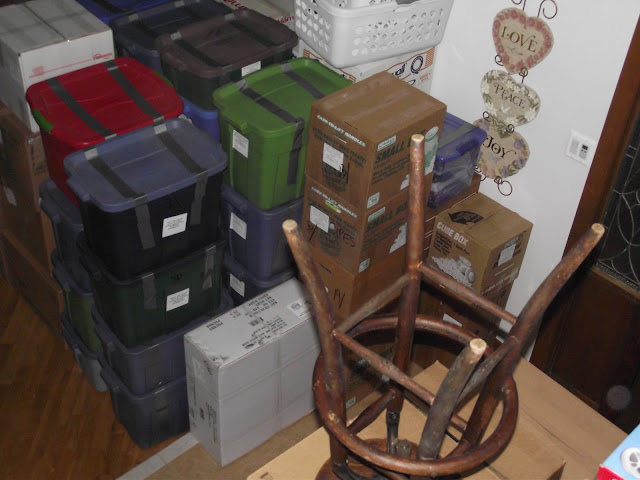 Enter Glitch #1.  What was to be a confirmation call for tomorrow’s arrival time became a clerk asking me if pick up on Tuesday was okay.  When I told her no, she said she’d try someone else and get back to me.  Several hours later she called me back.  Asking me is no longer an option as she is now TELLING me it will be Tuesday.  Enter Glitch #2 It will be Tuesday AFTERNOON! Enter Glitch #3 as I’m running the route in my mind and realizing that I will now need to pay for 4, count them 1,2,3,4 additional nights in a hotel with 4 animals since we will now arrive on a Friday afternoon and won’t be able to get any utilities until Monday.  So with the late load on Tuesday we’ll need a room for Tuesday as well as Friday, Saturday and Sunday.  I told her this was a real problem for me and she was going to speak with a supervisor and call me back again.  No call came and when I tried her I got a customer service voice mail recording.  Trust me I left a nice, BUT firm message.  There is no excuse for not at least calling me back and letting me know what the supervisor said!!!
When we booked this move, there was an opening for the 1st, but it came with a 2 day window for pick up.  Hubby didn’t want to be driving over the weekend if the window was on the end so we booked for the 7th, a Monday so we’d have a guaranteed pick up date and be able to schedule utilities and such during the week.
:Sigh:  we’ll see what tomorrow brings.  I’m trying to stay positive and believe all things happen for a reason despite our personal disappointments.

Hugs to you…this is just temporary.