Martha from Minimalist in the Making asked me to write a post for her.  I was initially at a loss, but then realized that the topic really fits my recent mindset.

Martha and I met several years ago and hit it off and have been fast friends since.  We have similar interests, beliefs and values.  We have begun two separate blogs together that we feel are successful, but still life overwhelms you and things change.  That change has happened to not just me, but also Martha.  Some of it I believe is happening to many of us just because of the state of the world, but for me it’s deeper.  Taking care of family has had a deep impact on me, but deeper yet is the cancer.  Ironic, but I got my quarterly test results today and they are “in range”, a good thing, but still mind altering as you deal with the materialistic side of life!!

Below is my post I submitted to Martha.  Please stop by and see what she has to say and what her other guest posters have to say.  You may find that this is a topic that affects you too!

Life can change in a heartbeat.  Ever hear that phrase before?  I always did, but wasn’t sure what it really meant – until recently.  Because of our travels around the country to care for family members and in search of a VA solution to red tape topped off by our extended stay in Texas because of my Ovarian cancer we have learned to live without many things.  Those things are all in storage collecting dust.  Every month I pay the bill to store these things.  The things in storage are/were our prized possessions.  The things still in the house are the pragmatic items.  When it comes right down to it, we don’t really need any of it.
My search for minimalism really began with my cancer diagnosis.  I thought of all the unfinished projects, unread books and cherished family items that the boys would have no clue about without my notes and how I didn’t have time to write out all those notes.  Then I thought about those same family items and wondered if anyone after me really cares about them?  Tradition just doesn’t seem to be a strong point with boys in particular, but also with today’s generation.
Our goal was to get back west with family so we came home to the snowy north with just what we had acquired along the way via a moving company that was a part of a huge scam, but that’s another story yet.  Besides being a scam that we are filing charges against, they lost furniture and boxes and have no remorse or desire to find them.  They just want to throw money at it. The insurance doesn’t begin to cover the damages to family pictures or missing furniture.  In my younger years I would have been devastated by this.  Now I just shake it off, deal with the paperwork and move on.  In the big picture things just aren’t worth the effort to get all worked up.  Maybe it’s my new lease on life, but either way I’m ecstatic to get my minimalist life going!
Our goal was to finish a few projects and sell the house.  Things happen all the time that change our (collective term here – you may be next) grand plans.  You know the old saying, “Man plans, God laughs”.  Well He’s having one heck of a belly laugh on my account. 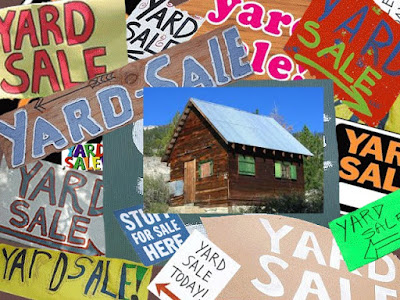 Years ago when we first started out, hubby and I rented a small cabin  (small closet, single bed, couch, refrigerator, small table and a TV) in the mountains near Los Angeles.  It was an old officer quarters – hot in the summer, cold in the winter and simple!!  We had some of our happiest early moments in that cabin and have joked over the years about how we’d do it all over again.  More than ever I’m convinced that I want less, less and less!!  We’ve decided to sell everything we can and start a simpler life!

Such a beautiful post. I see myself in these words.