Baked Potato Soup Recipe
8 slices Smithfield Naturally Hickory Smoked Bacon
1 onion, diced
1/2 cup all purpose flour
3 (14.5 ounce) cans chicken broth
5 potatoes, baked, peeled and diced
1 teaspoon dried parsley flakes
2 cups half & half
1 cup sharp cheddar cheese, grated
1 cup sour cream
Salt & pepper to taste (optional)
Directions:  In a Dutch oven cook bacon until crisp; remove and crumble, reserve drippings.
Cook onion in bacon drippings until tender; stir in flour and cook for one minute, stirring constantly. Gradually add chicken broth; cook, stirring constantly until thickened and bubbly. Put in the diced potatoes, parsley, bacon and half & half; cook for 10 minutes. Stir in cheese and sour cream. Garnish with cheese, bacon and sour cream.
Modifications:
-I used turkey bacon instead of pork bacon. Because turkey bacon doesn’t have as much fat, I put some olive oil in so that the bacon would get crisp.
-I added some artificial bacon bits.
-I added some minced garlic.
Here’s how I did it:
#1 I peeled, washed and cut up about 6 potatoes (sorry for the shadowy picture).

Here’s what I started with: 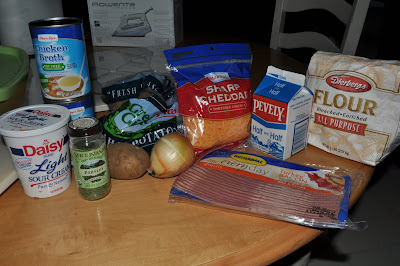 I noticed that it didn’t seem like a lot of bacon so I put about 1 T of artificial bacon bits in the pot, too.

The recipe said to let all of the above cook for 10 minutes but I didn’t think that it was enough time because the potatoes were still hard. I let it go for about 15-17 minutes and then I added 1/2 cup of light sour cream and 1 cup of sharp cheddar cheese.
Here’s what you’ll end up with: 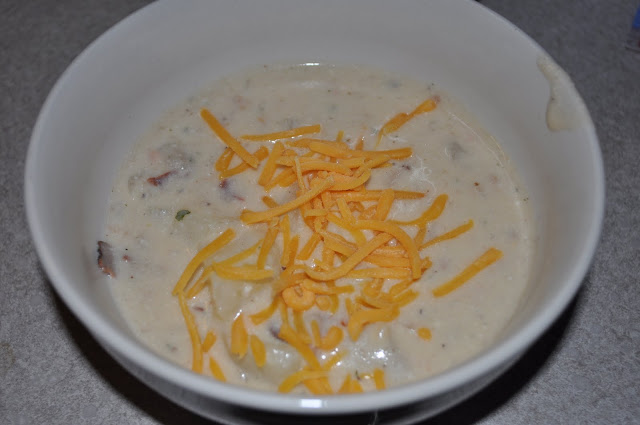 Review:I only have one word to describe this soup–DELICIOUS! This soup only took about 40 minutes with prep and cooking time. It had great flavor and I love the fact that cheese was actually added to the soup and not just an after-thought as a topping.

I don’t know if you can tell or not in the pics but I left pretty big pieces of bacon and it added great texture. I wish that I would have cooked up a couple of more pieces and then saved some to put on top, too.

If you like potato soup, this is for you!!