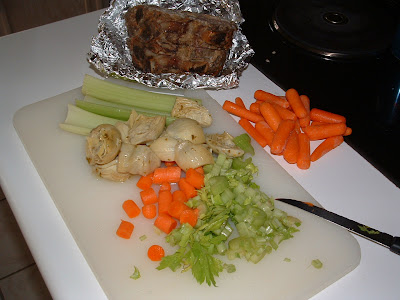 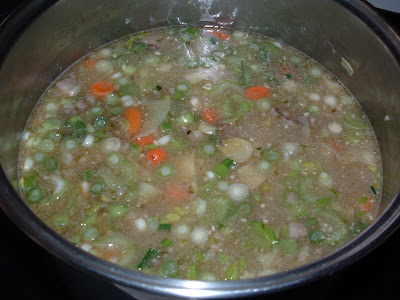 Those of you that know me, know that nothing goes to waste around our house – EVER! So in the spirit of cleaning out the fridge this soup recipe was born. You’ll remember that I recently purchase Navy beans, Great Northern Beans and black eyed peas for recipes this month. I made the Navy Bean and Ham Soup which was a HUGE success and then the Texas Caviar aka Cowboy Caviar for New Year’s which was also a HUGE success so I had high hopes for this soup. It was good, but I think it will be better next time with the change to the Navy bean which I found to be more tender and flavorful.

The small, white navy bean, also called pea bean or haricot, is particularly popular in Britain and the US, featured in such dishes as baked beans and even pies, as well as in various soups such as the famous Senate Bean Soup.

Other white beans include Cannellini, a quite popular variety in Central and Southern Italy which is related to the kidney bean and like the kidney bean has higher levels of the toxin lectin (Phytohaemagglutinin).

Yummy! I think I will try your recipe. Can’t wait!!

thanks for sharing! Kathy 🙂

I made a soup, I called, Clean My Fridge Soup, or something like that.

Such gems can be found in both refrigerator and freezer, especially the freezer.

I have been working to clean out my fridge and freezer. Don’t like to have much in there longer than a year.

I love clean out the fridge soups. I call it my energy soup because it’s always so healthy with lots of veggies and I usually add whole grain Kashi which provides a great energy boost for workouts 🙂

I wish I had a hunk of prime rib left over like that right now, mmmmmm steak and eggs!

Great sounding soup and an excellent way to use leftovers.